Ed and I decided to start trying for a sibling for Gavin when he was just six months old.  We figured it would take a while.  After all, Gavin was conceived with the assistance of fertility experts and it took some time.  Boy, were we shocked when we got pregnant on the first try!!  Thrilled is more like it.

Immediately, Gavin started his research on how to be the best big brother in town.
*wink* 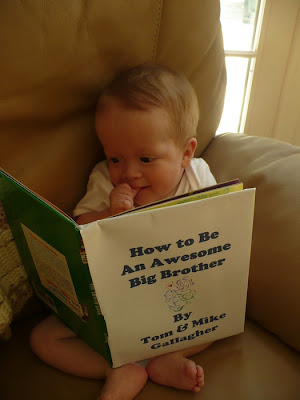 Early on, I received terrible news.  Followed closely by Ultrasound, it was apparent that the baby had the signs of a major chromosomal abnormality.  I was told that he would likely not survive the pregnancy... and if he did, he would not live to come home. 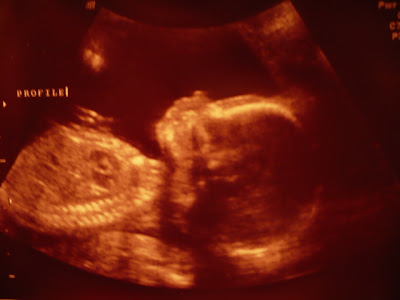 We were told we should consider terminating the pregnancy.  Ed and I were adamant that I would carry this baby no matter what, but we scheduled genetic testing so we could figure out what exactly we were dealing with.

The day of the procedure, the doctor started with an ultrasound.  I knew by this point what the screen should look like so the doctor and I noticed something unusual at the same time.  That "sign of a major chromosomal abnormality"... the mass that became bigger than the actual baby... it was gone.  It had been there the day before - and gone the next.  We still to this day don't know what to make of that.  All we know is we were glad we didn't take the advice to terminate.  A couple weeks later, the phone call came from the genetics lab.  The baby we were carrying was 100% healthy... and 100% a BOY!!  Gavin was going to have a brother and we were overjoyed.

We quickly named him Brian... meaning "strength".  His middle name is David, after Ed's father.  Gavin's middle name is the same - to honor the grandfather they will only meet in Heaven.

My pregnancy with Brian was less eventful than Gavin's, although I still struggled with pre-term labor issues and had multiple hospital trips to be monitored.  I also had to take blood pressure medication due to the circumstances around Gavin's birth.  The month of his due date, I was admitted into the hospital with signs of pre-eclampsia.  On December 16th, 2008, the doctor came into my room and said I would likely be remaining there for the rest of the pregnancy to be safe. The thought of being away from Gavin for weeks had me distraught... which likely spiked my blood pressure... which brought the nurse running... which had the doctor called back to the hospital from home... which led to the announcement, "You're going to meet your baby tonight!" Ed called our neighbor friends, Chris and Paul, who rushed to the house to stay with a sleeping Gavin while Ed sped to the hospital.  Shortly thereafter, Brian was born.  6lbs, 15oz and 18 1/2 inches.

The best sound of that day... screaming. 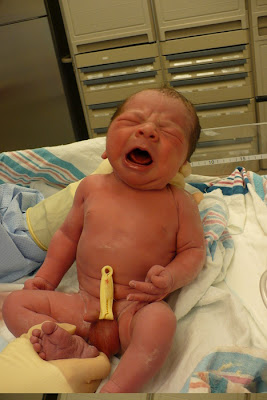 The delivery room was filled with joy. 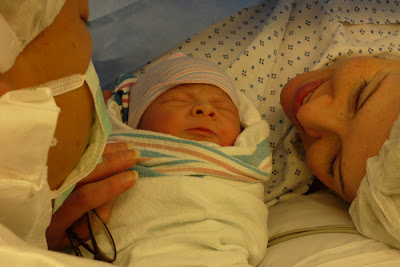 The next four days I spent in the hospital with Brian are some of the happiest days of my life.  It was a novelty to me to have him in the room WITH me!  To hold him whenever I wanted!  I didn't have to ask if I could touch him... or feed him... or change him.  He breastfed right away. 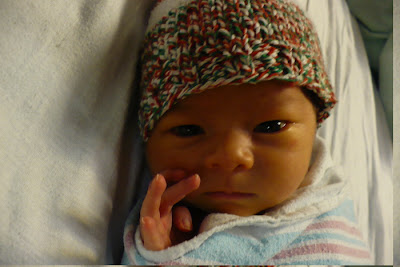 Those four days I felt I was able to bond with him in a way that wasn't possible with Gavin.  I'm not sure I ever put him down.

Ed brought Gavin to the hospital to meet his brother and it's safe to say that we were one happy family. We felt so blessed. 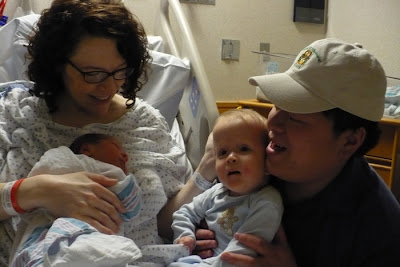 Once we got home, everything fell into place.  My fears of not being able to meet Gavin's needs and an infant's needs were just that... fears. 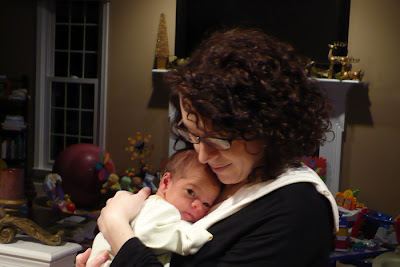 The boys quickly bonded and we established a great routine.  Ed and I felt so lucky that we were able to give Gavin a brother... and knew they would have a lifelong bond. 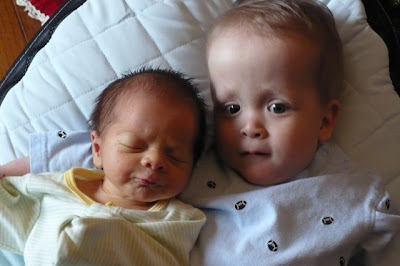 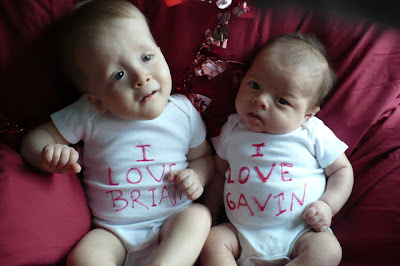 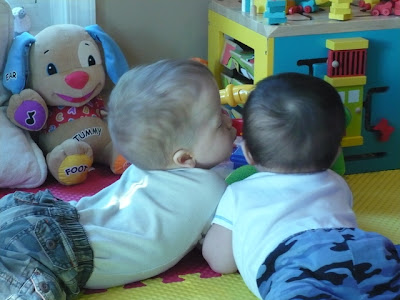 As we watched Brian develop, we were in awe.  He just did things naturally and we weren't used to it!  It's amazing how we take the simplest things for granted.  Breastfeeding.  Holding a toy. Lifting arms up to be picked up. Sitting up. Crawling. Taking steps. 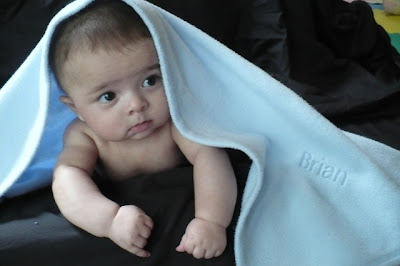 All of these things have been either not mastered yet or took months and months of practice and work for Gavin.  We will never look at a baby the same way again.  Gavin gave us the gift of appreciation for how much effort it takes to move and function as a baby.

We quickly discovered that Brian had a big personality.  He was always smiling... 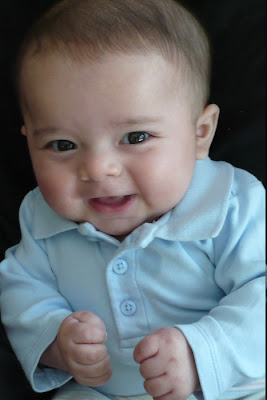 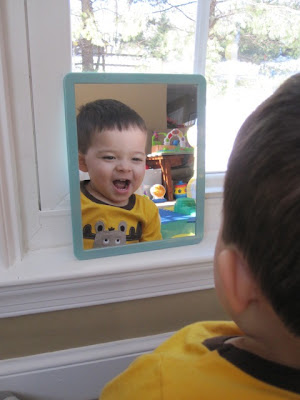 If there had been any darkness that remained from Gavin's difficult medical issues, it was wiped out when Brian arrived in our home. He has been so much fun.  God knew just what he was doing. 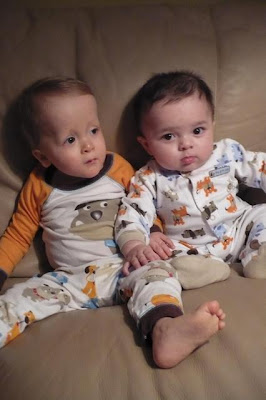 And a funny thing happened once Brian arrived.  Gavin started paying attention to every move he made.  Brian played with a toy - Gavin wanted to play, too. 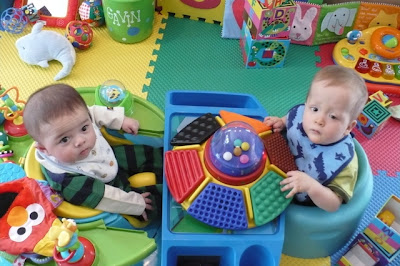 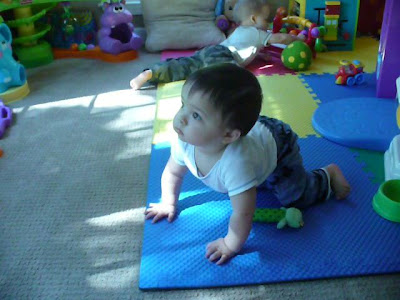 Brian started to pull up to stand - Gavin started pulling up to stand.  Brian crawled up the stairs - Gavin did, too.  Brian turned out to be Gavin's greatest therapist!!  He wanted to keep up with his little brother!

Brian loves to read.  You will often find him in his little library... pointing to letters and pictures.  He had a speech delay that had us calling our Early Intervention therapists back to the house, but that has since resolved! He started preschool four mornings a week when he turned three and receives group speech therapy services there.  He's doing great and LOVES school! 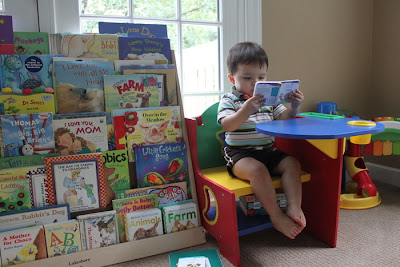 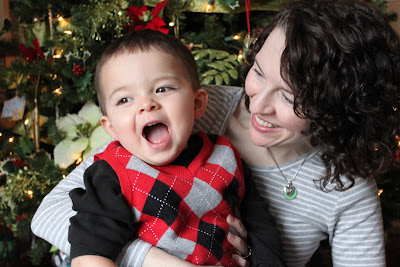 Every day of the last four years has been an adventure with him! 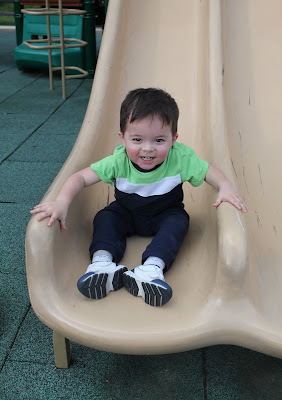 I feel so lucky to see life through his eyes.  Brian is a very special, very sweet little boy. 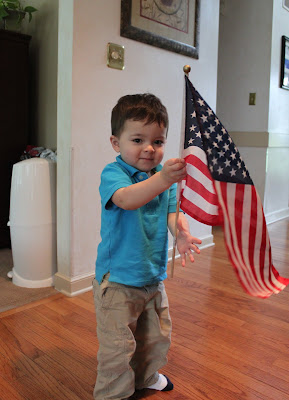