I started a journal on January 26, 2008 in a small hospital room sitting at the cribside of our infant son, Gavin. I was on a loaner laptop from the hospital for eight long weeks and was told of a website called “CaringBridge”.  There, I could write journal updates and send it out to family members to keep them updated on Gavin’s condition. It saved me a lot of phone calls... but it also did so much more.


I had no intention to write longer than Gavin’s hospital stay or for an audience bigger than our family and friends - yet here I am still writing every day.  Along the way, we’ve collected lots of “friends” and tons of supporters. They’ve invested themselves in our son’s progress... they have seen us through the birth of our second son... and the tragedy of losing our daughter.  They have rejoiced with us when Gavin first pulled up to stand... prayed for me when I suffered one miscarriage after another... and watched our family grow. Writing every day has been incredibly therapeutic for me - you'll find that I really don't hold back. And along the way it's become a treasured keepsake for my children when they are older.
This has never been a "traditional blog". When you come here, you'll hear about our day... about Gavin's progress... about my struggles... about Brian's latest milestone. Some days it's happy, some days it's sad. If at all you think I must be kidding, I probably am. I don't take myself too seriously, so I hope you won't either!
If you want to read the journey from the beginning, you can click HERE to get to the CaringBridge page where it all began.

If you want to know how our family really began... keep reading... 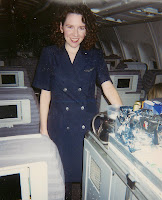 In 2002, I was a flight attendant for USAirways.  After two years of international travel, I had just come back to a domestic route.  My typical week was one trip to San Francisco, one of my favorite cities, and back again.  A beautiful three day work week.  One day, while reporting for my trip - another flight attendant approached me.  She knew I was headed to San Francisco and asked if I would consider switching with her.  I asked her where she was going.  "San Juan, Peurto Rico", she said excitedly - trying to sell me on an island adventure.  I looked at her and said, "Have you seen this hair of mine??  Can you imagine it's size in a place like San Juan with all that humidity?  I won't be able to get through the airplane door!"  She begged and pleaded... and I finally gave in.  It was one trip - I could suck it up.


Little did I know... that would be the day I would meet my husband.


Ed was traveling back and forth to San Juan on business.  He sat up in First Class along with the other business travelers... but there was one difference that I noticed right away.  He was not at all pretentious. I was used to the business travelers that like you to think that they purchased their first class ticket themselves (when we know their company pays for it) and treat you like you're their servants.  Ed was extremely polite, very considerate, super friendly... and rather adorable.  What I didn't know was that he was flirting with me!  Went right over my head.  I stood there like an idiot when he handed me his card as he was deplaning, saying he'd love to have coffee sometime if I'm ever in Puerto Rico or Philadelphia again.  Until that moment - neither of us knew where the other was from.  As a flight attendant, I could have lived anywhere and flew out of Philadelphia.  It turned out, we lived about 15 minutes away from each other. 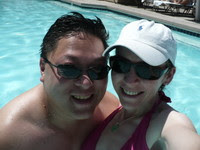 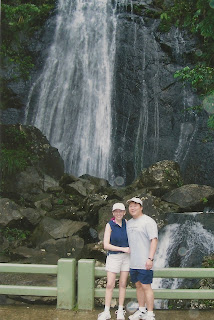 It really was meant to be.  Our first date lasted two years until Ed proposed.  It was an easy yes.  We ended up going back to Puerto Rico many times... after I invested in some frizz control products.


We packed in a lot of fun in the two years before we got married... traveling and eating out often.  Once we decided to get married, I stopped flying and Ed cut down on his travel.  We just didn't want to be away from each other. 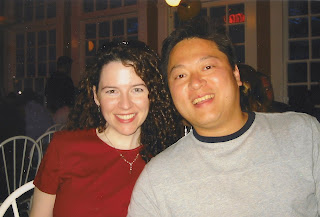 Then, On May 22, 2004 we married in the church where I was baptized.  Our wedding day was magical and very personal.  I was 34 on our wedding day.   Ed was absolutely worth the wait! 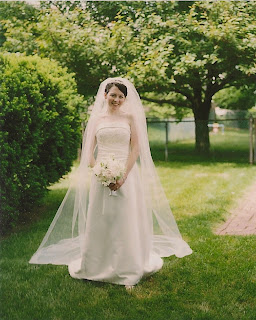 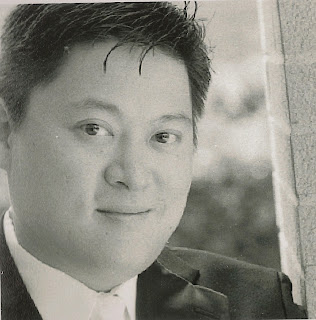 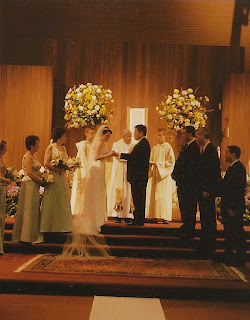 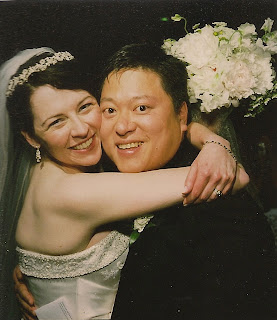 Someday we will both get married again... to each other.  And it's not only because I want an excuse to wear that dress again.  Hopefully we'll be able to swing another Hawaiian honeymoon, too!
Hey... a girl can dream. 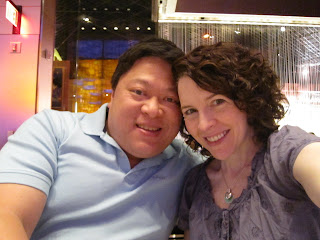 We never could have known what was in store for us.  Our road to have the family we always wanted has been very rocky.  I have suffered through seven miscarriages and one stillbirth.  I have struggled with Rheumatoid Arthritis since the birth of Brian which is one of the main reasons I have help each day with the boys.  There are days that it's painful to change their diapers or even pick them up. Ed has been an amazing provider which allows me to stay home with the boys and be with Gavin through all of his therapy. 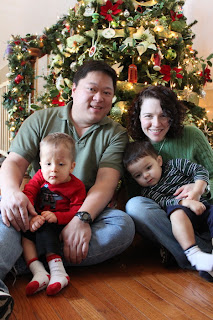 All I've ever wanted to be... since as young as I can remember... is a wife and a Mom.  Did I imagine my Irish name of Kathleen Gallagher would turn into Kathleen Leong?  Probably not.  Did I ever think I would struggle to conceive?  Never.  Did my family vision involve walkers and orthotics and feeding tubes and arthritis at 40?  I think we all can answer that.  But don't expect me to feel sorry for myself very often.  And don't at all feel sorry for us.  Because despite the bumpy ride, this has been the greatest journey of my life.  I am the Mom I've always wanted to be... and the wife to a very good man.  Life is good. 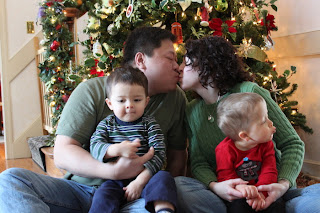 ... And they keep living happily ever after.