Blizzard in my Bones...

Perhaps you heard - there was a bonafide BLIZZARD where we live! The sky dumped close to 28 inches on our area. It was so fun to watch the snow fall outside our windows. 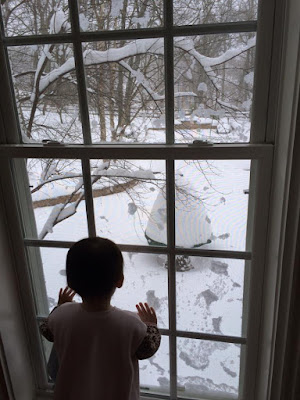 And at one point, we even went out while it was snowing! 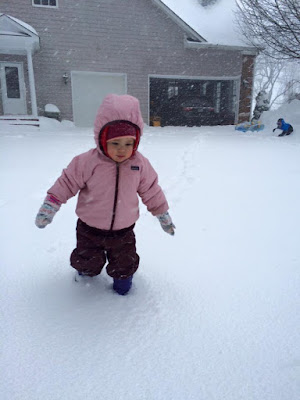 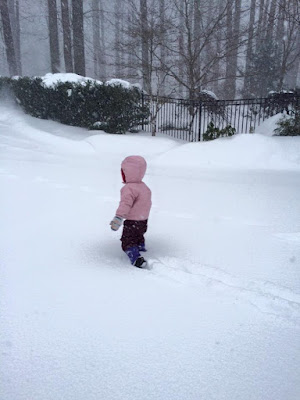 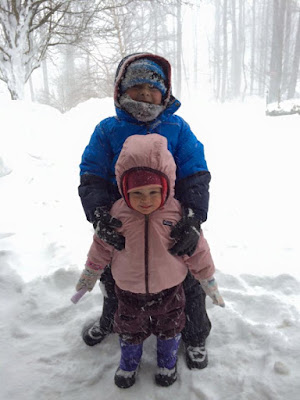 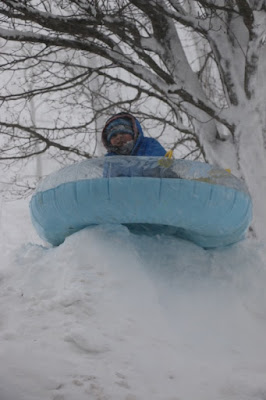 So windy that Brian almost blew away! 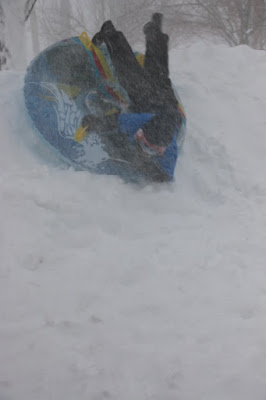 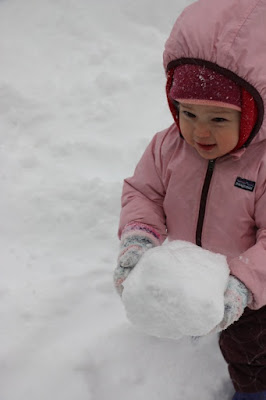 But it wasn't too cold for Hope to bring out her stroller and take her snowball baby for a walk! 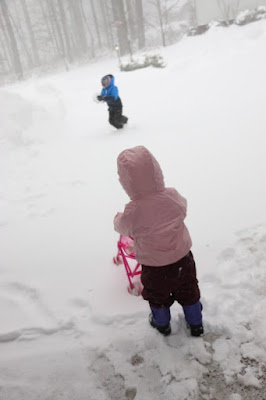 We laughed until our tears froze on our cheeks and then quickly rushed inside for hot chocolate. We waited out the storm by playing inside and crossing our fingers that we wouldn't lose power - which we didn't! While we were playing in the basement, I had to capture Brian and Hope's new party trick - Tandem Sliding. Ha!
When the snow seemed to slow down a bit, we got brave and decided to open the front door. It was an incredible sight!! 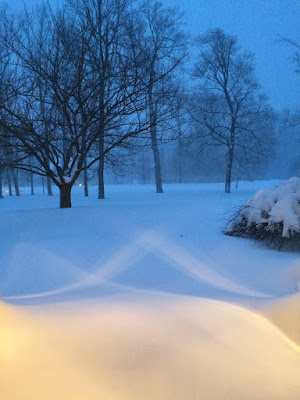 Ed was up much of the first night with our tractor that has a plow attachment and a snowblower to try to stay on top of the snow while it was still falling. Eventually, he had to throw in the towel. It was so cold and so windy that his face literally froze. An interesting alternative to Botox, but I'm not sure it's sustainable long term. But I digress....

By late Saturday afternoon the snow stopped. We spent all of the day hanging out inside. We watched a movie (Ice Age, ironically!), played some games and I even started to take down some Christmas decorations. I know, I know - it's early to take down the Christmas tree... but I thought I'd get a jump on it. (ha!) After the kids went to bed, Ed and I went back out to attempt more snow removal. I did my best, but I had to give up after about an hour outside. I was worried that I would wreck my body and joints before the next day which I knew would be all about playing in the snow with the kids. Ed ended up hiring someone to plow - thank God. Our new driveway is long - and I didn't want to sit inside worrying about him.

The next morning, Brian woke up and was stunned when he looked out his bedroom window. He's never seen that much snow in his entire life. I knew this was going to be a weekend that would be embedded in his memory forever. I wanted him to be able to look back and remember "the Blizzard when I was in first grade" as super fun!! Hopefully, he will.

Round one outside was during Hope's nap in the morning. I wanted him to be able to play with us without either of us being pulled away to help Hope. I loved watching him make snow angels!
Also fun? Watching him attempt to get up afterward. 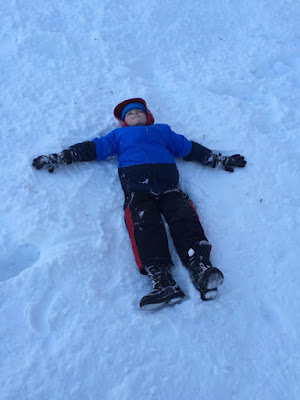 He made what he called a "castle and these are the guards, Mom - and can you stop singing "Do You Wanna Build a Snowman now, please?" 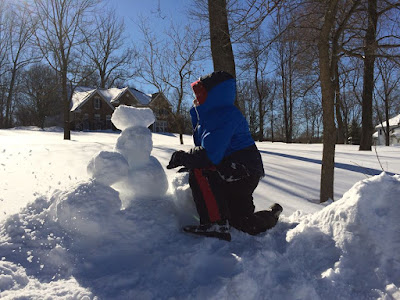 Well, he told ME! 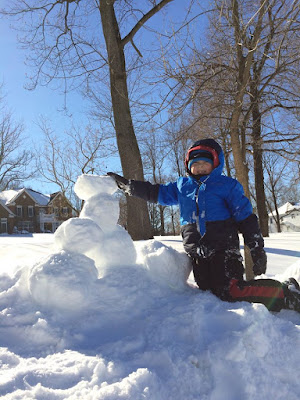 He built a tunnel with Ed... 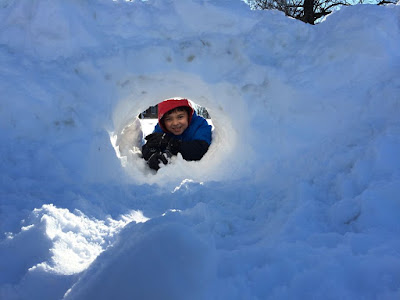 And we went for a little walk... 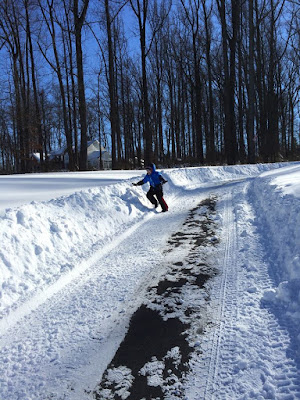 Oh, and he climbed a mountain. No biggie. Ha! 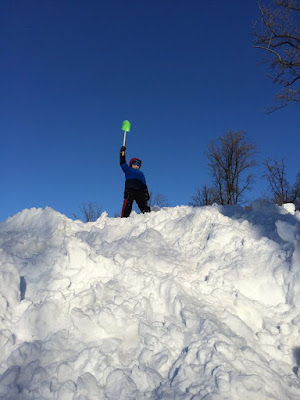 After lunch, it was Hope's turn to go outside. As I expected, she was completely fearless and up for anything! Our driveway still had snow packed on it so I took advantage of the hill and sent her on her first sled ride! As you'll see at the end of the video, she was definitely into it.
Brian got in on the driveway fun, too!
We did it again...and again... 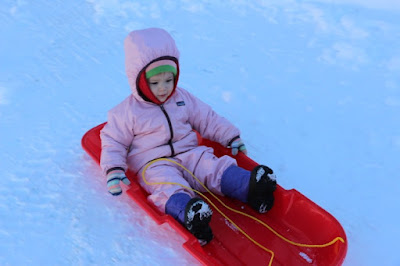 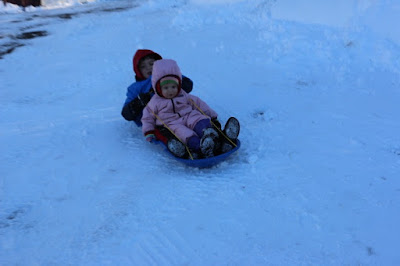 Hope even took ME for a sled ride!!
She also took me - and the sled - but not me ON the sled this time - for a walk down our quiet, empty street. 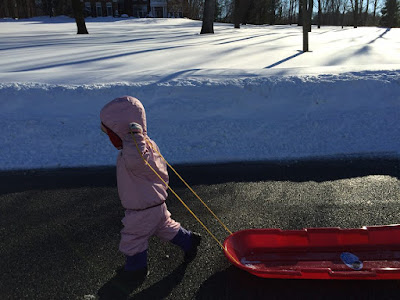 There was so much snow lining both sides of the street that she couldn't even see over them to find our house! 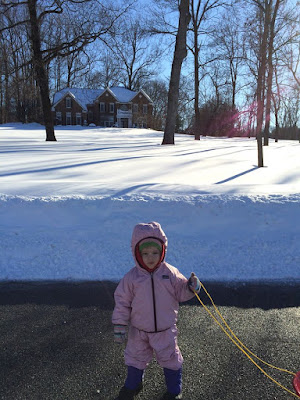 Brian couldn't wait to show Hope his tunnel and insisted that she crawl through it. 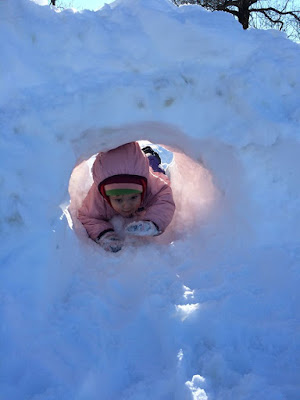 Not going to lie - I was a little afraid she would fall into a snow drift and I wouldn't be able to get in and pull her out! But she made it through and came out smiling, as usual. 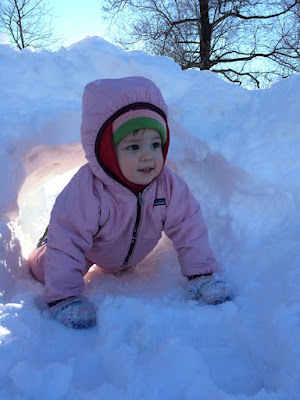 Hope went on the sled a few more times before Ed took her inside. I thought she had been out long enough. 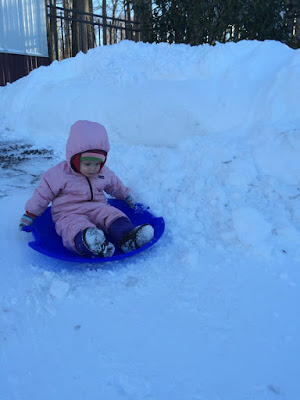 It was really cold! But she is so tough, I'm sure she could have hung out a lot longer than I let her. But worrying is my job! 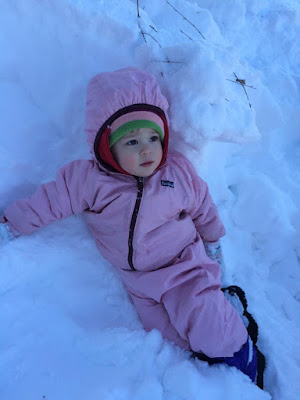 Brian and I stayed out for a little while longer. I loved watching him sled down our front yard. His laugh is always contagious. 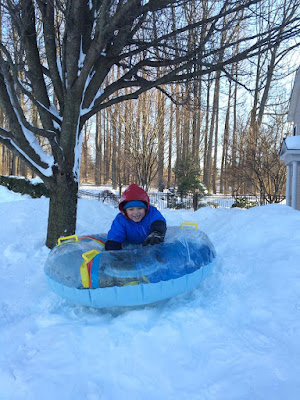 All of this - this whole post - seems like the picture perfect scene, doesn't it? Blizzard! Family time! Playing in the snow!!

But the reality is - I literally could have burst into tears at every turn. I never know when my Rheumatoid Arthritis will flare up - or if something I do will trigger or exacerbate it. Unfortunately, Sunday morning I woke up feeling like my bones were crumbling. The pain was so bad - and the swelling, too - that I started a round of Prednisone along with pain medicine to help. (It didn't yet)

Having RA is what it is - I can't change it. I try to approach it like I do everything else in my life - with a positive outlook. But I have to tell you - it can be very depressing. I have a chronic, progressive disease. I try not to complain on a daily basis - or bring it up much at all to Brian, especially. I do this because it will only get worse. If I can't hack it now - or show up in all areas for my kids, especially physically - then I'm screwed!! More like THEY will be screwed. I feel like I need to create a lot of long lasting memories of an active, engaged, fun, happy Mom now just in case it gets to the point that I really can't do as much down the road.

If you know even a little bit about me - it crushes my spirit to even think this way.

So, when it's especially painful - like it was on this glorious snow day - this possible "once in a lifetime blizzard" - I go into a place mentally where I can block out the pain and focus on being with Brian and Hope. Does that work? Well, not really... but sometimes I can distract myself from feeling. I get them in and out of all the layers of their snow gear - not an easy feat and it takes me quite a while. I play outside and try to avoid climbing into the snow where it takes up a lot of my energy to trudge through the deep drifts. I help pull Brian onto his sled and hold him there until he counts down for blastoff. I know I end up paying for it later, but that's okay. It's okay - at least to my heart, not my body - because creating a lot of long lasting memories of an active, engaged, fun, happy Mom now... just in case... is just as much for me as it is for them. And if they don't remember, it's written here with photo proof.

"Mommy survived the blizzard in her bones during the blizzard of 2016 - and she was so happy to make memories with both of you."

(p.s. - Not looking for arthritis advice. I'm holding off on any RA meds as I'm still nursing Hope... and I'm under the care of a fabulous rheumatologist.)

Posted by Kate from Chasing Rainbows at 9:39 PM