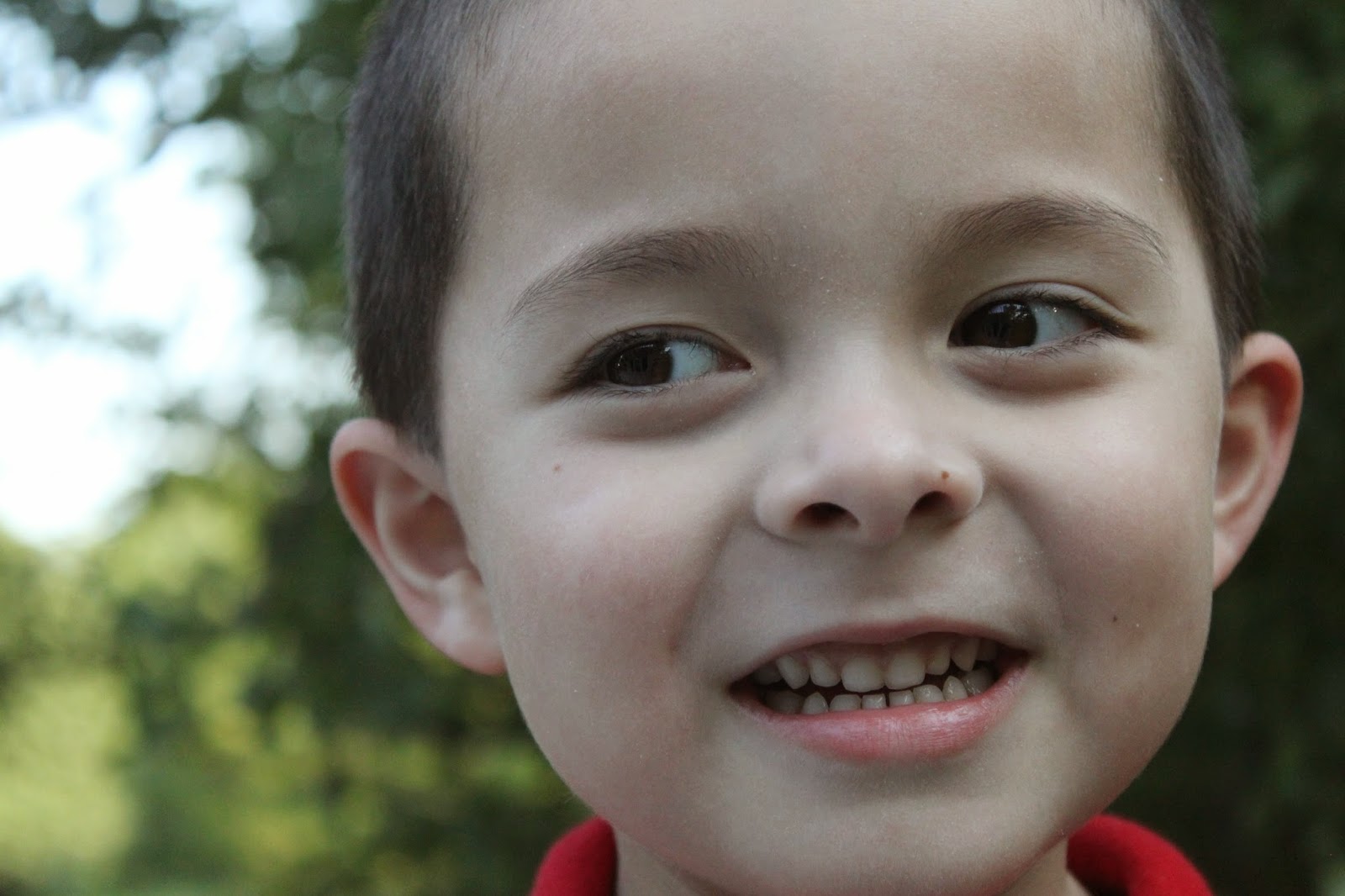 He's my sidekick... my hand holder... the best audience to my made up stories at bedtime. 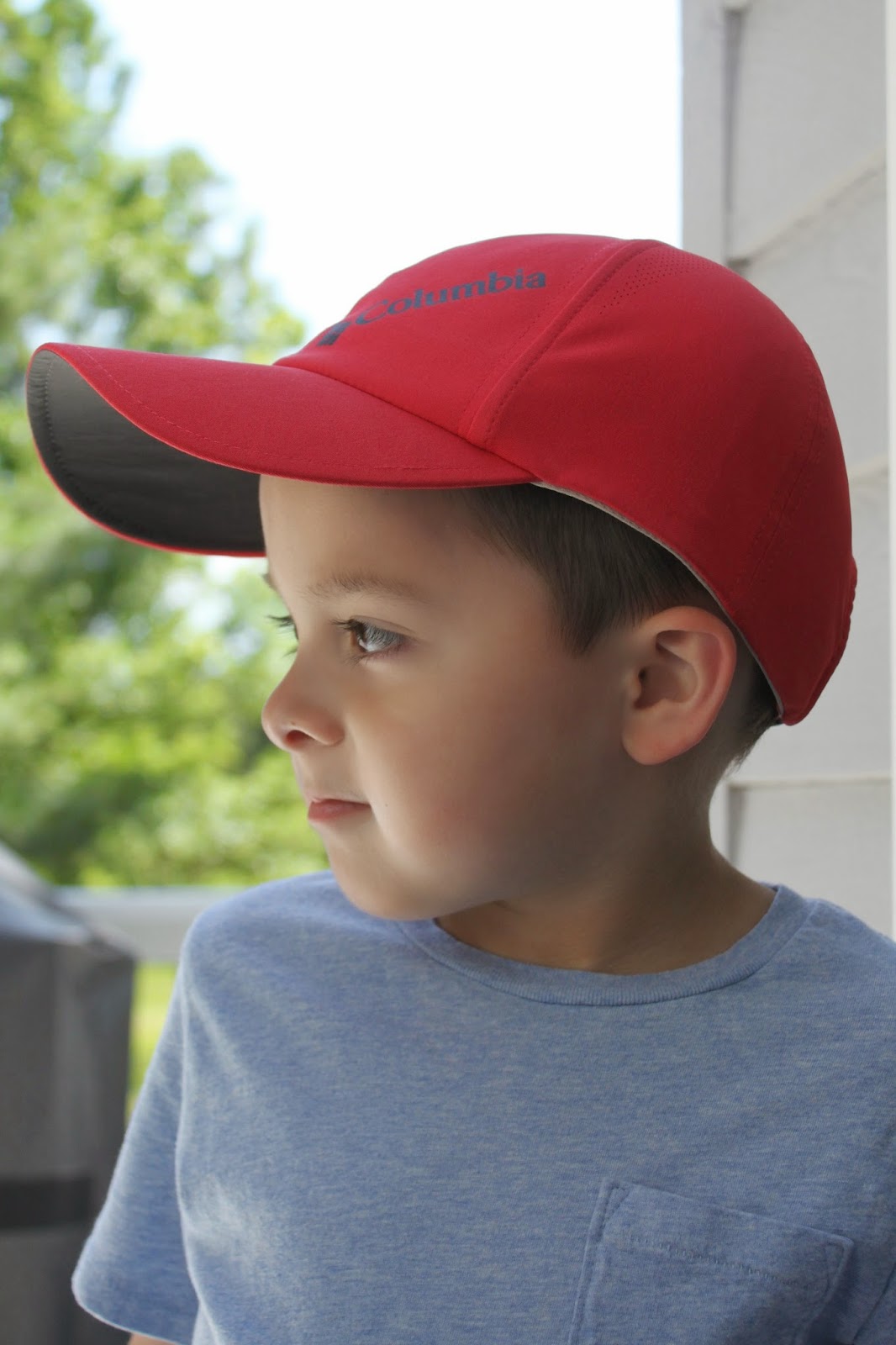 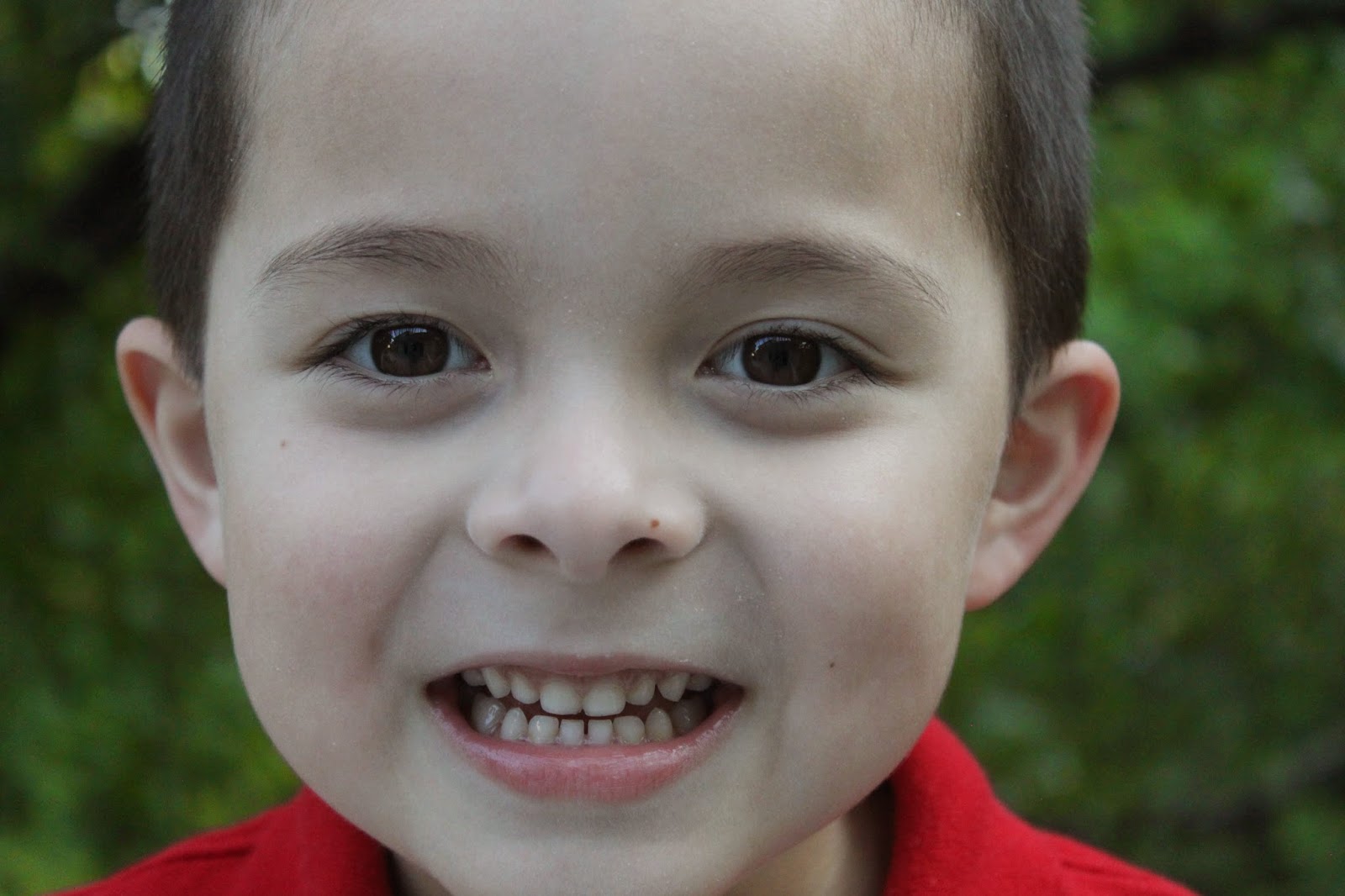 He laughs day and night... loves to sing... and his favorite color is red. 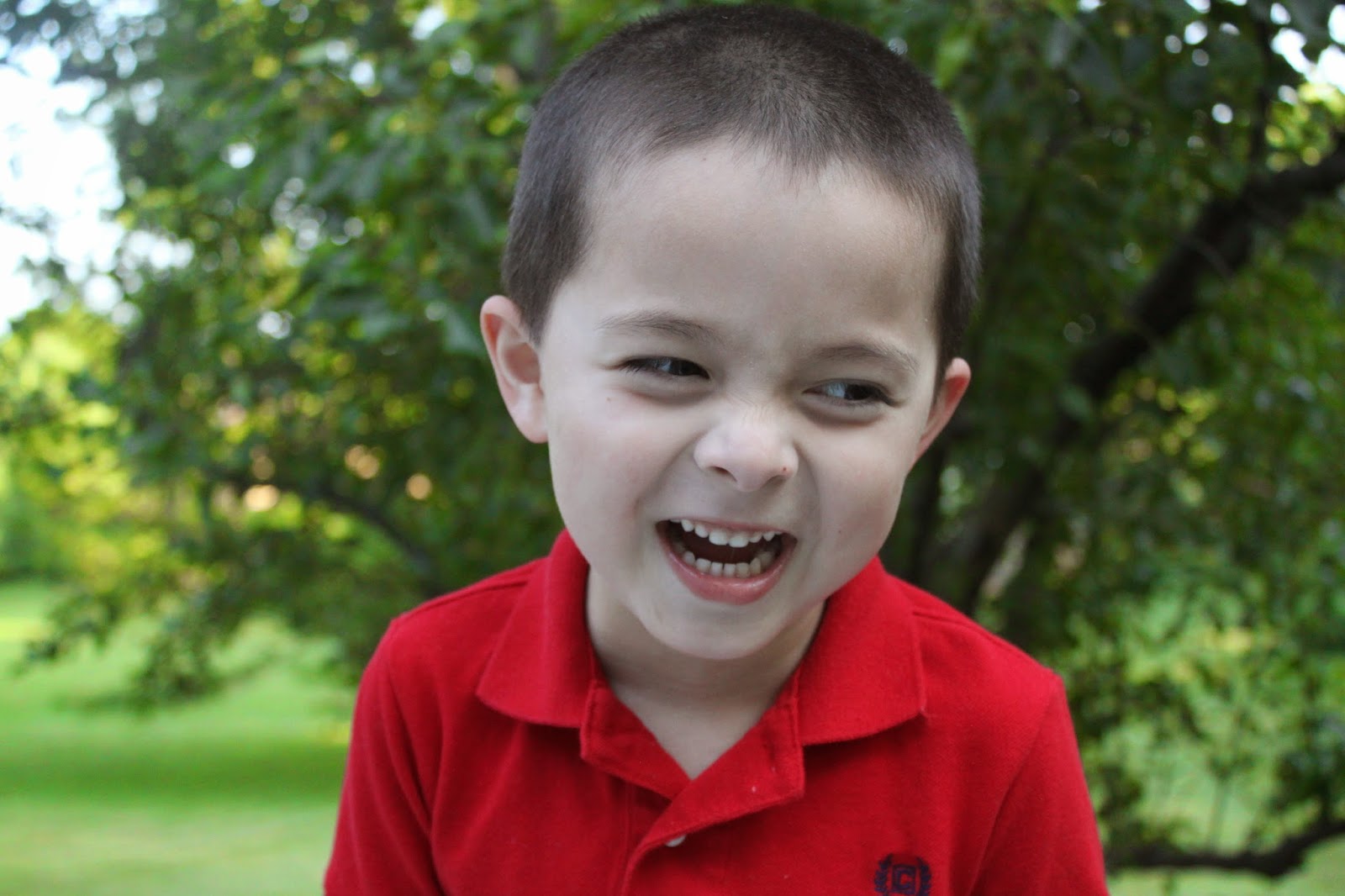 He has a keen sense of direction and can remember how to get to almost every place we've been around town.  He pays attention. 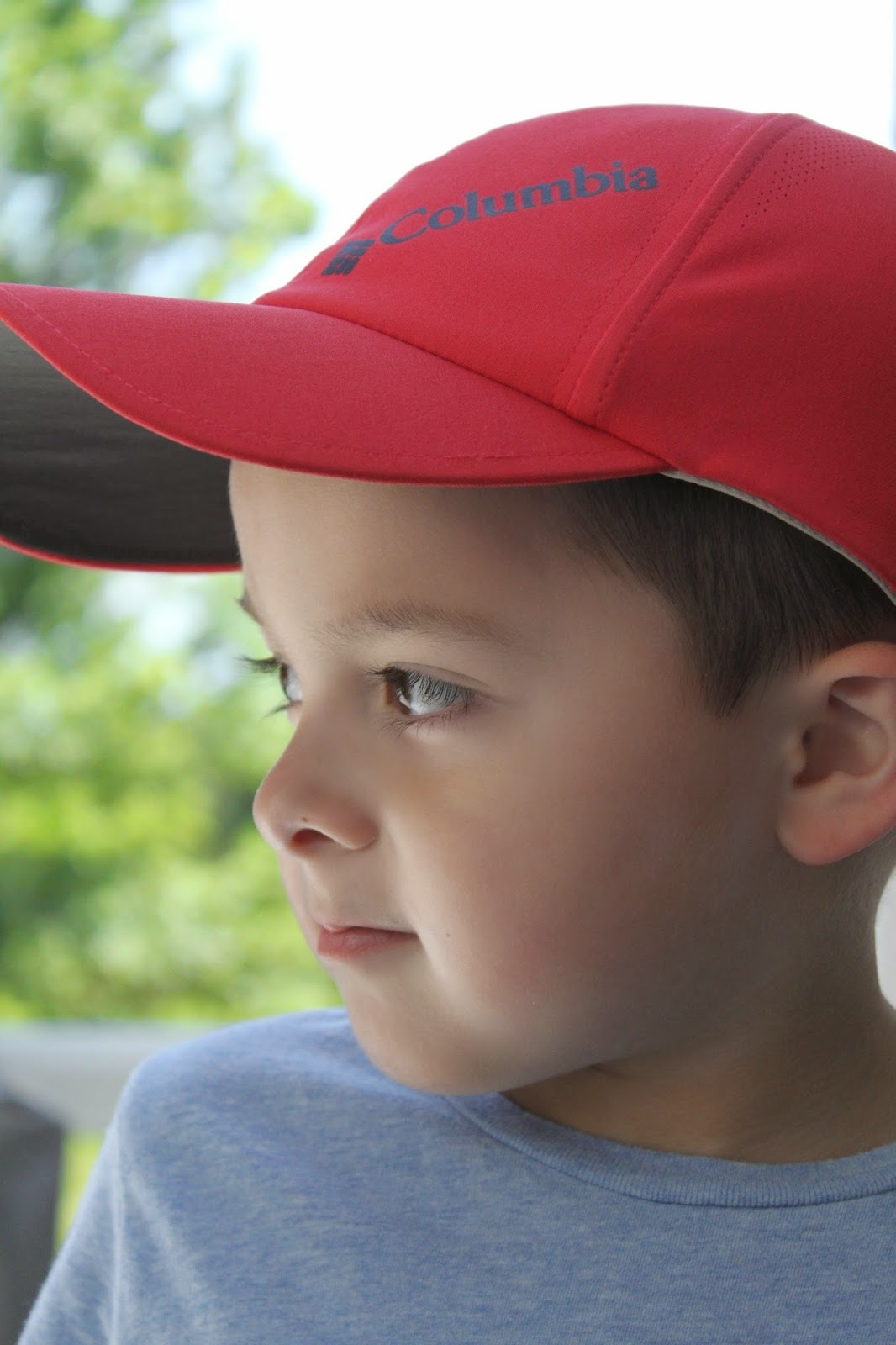 He's a "go with the flow" kind of guy.  Last year he happily tagged along to all my OB appointments and never complained.  Maybe it's because he had fallen hopelessly in love with his little sister and was very interested in her well being from the moment he learned she existed. 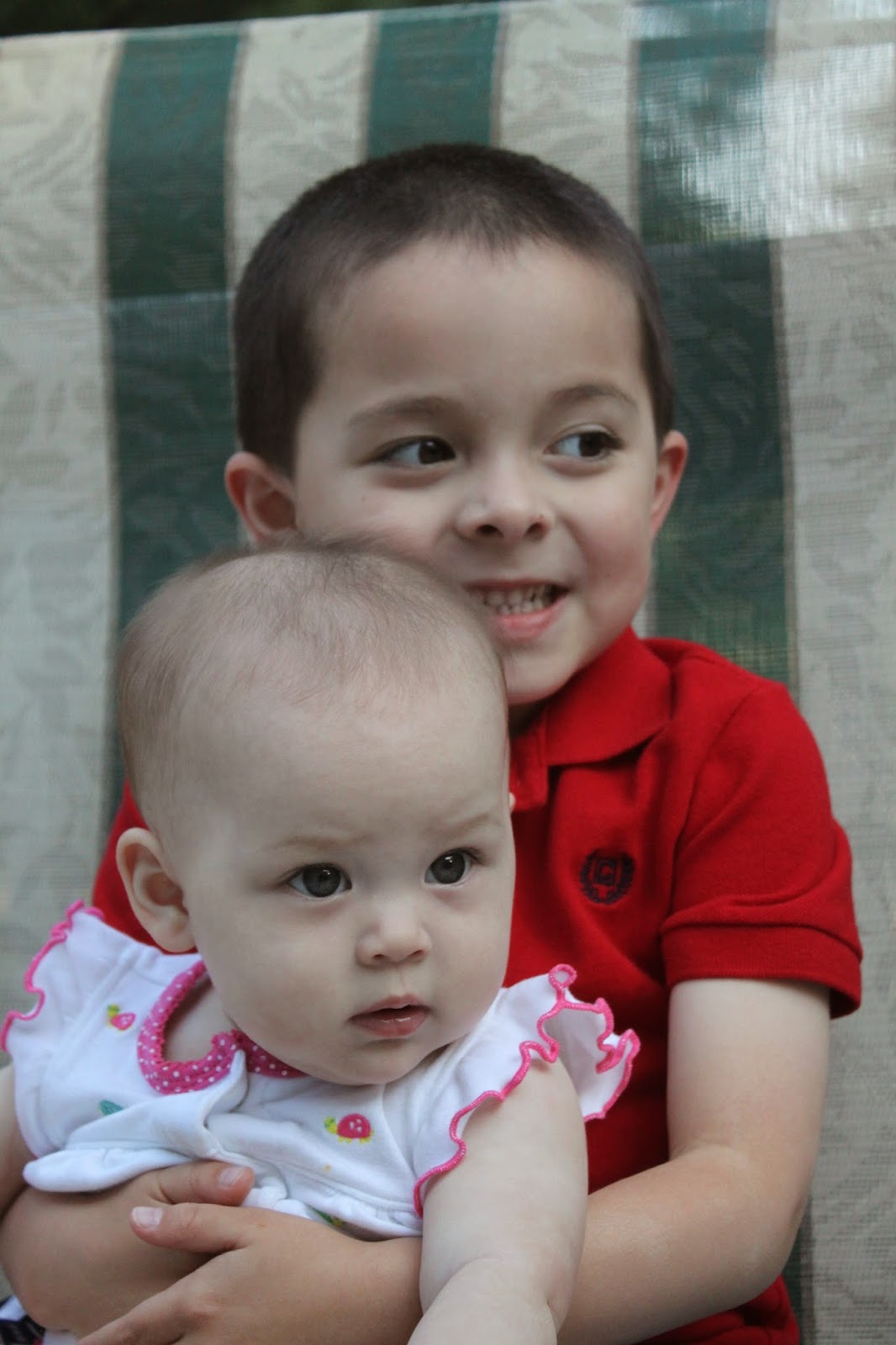 He's at an age where I can "use" him to fetch a diaper for me in a pinch - or entertain his baby sister while I'm in the bathroom... 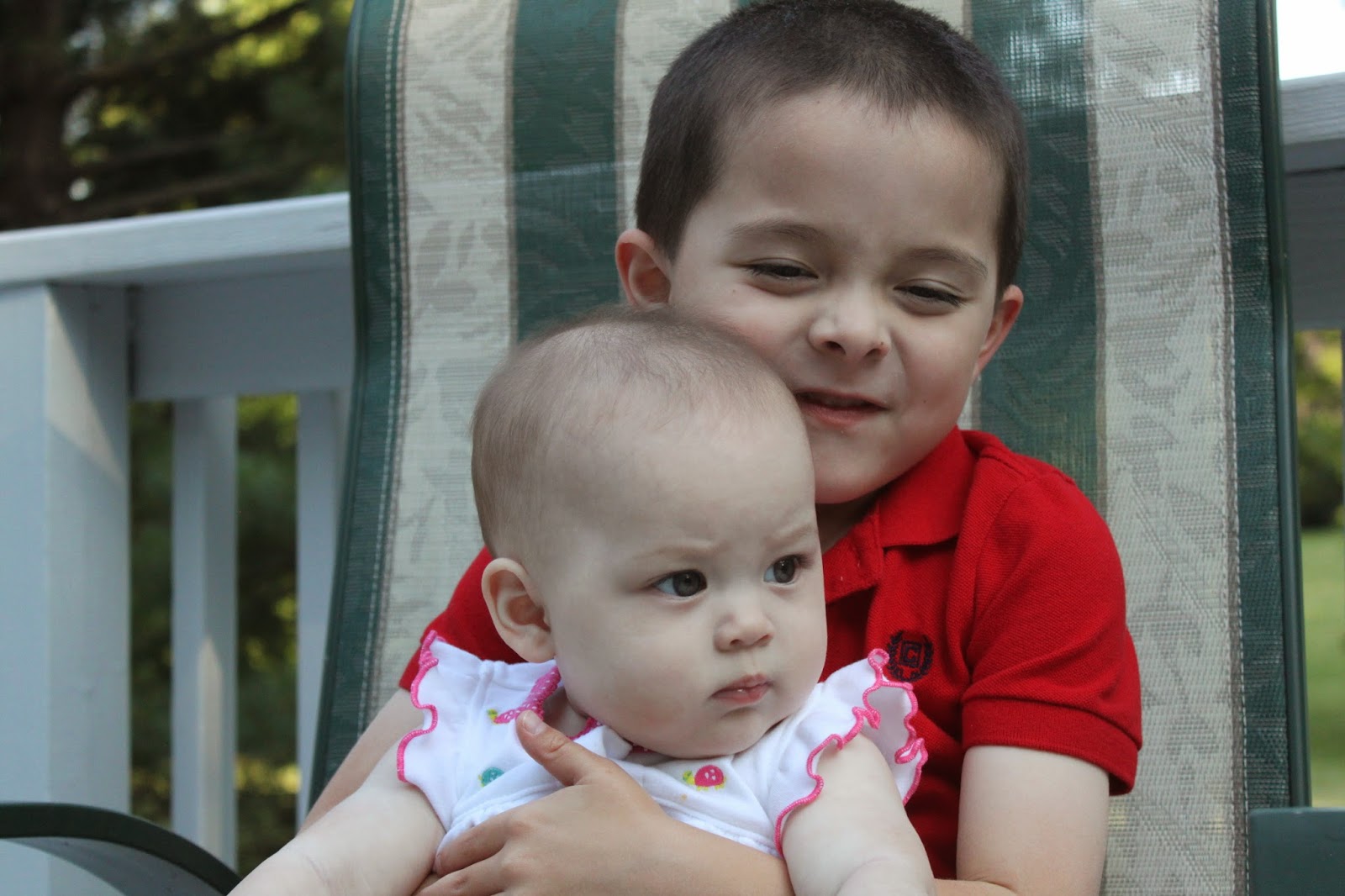 ...but no one asks him to sing to her, tell her he loves her fifty times a day, lay on the floor and play with her and hug and kiss her.  I'm so happy they have each other. 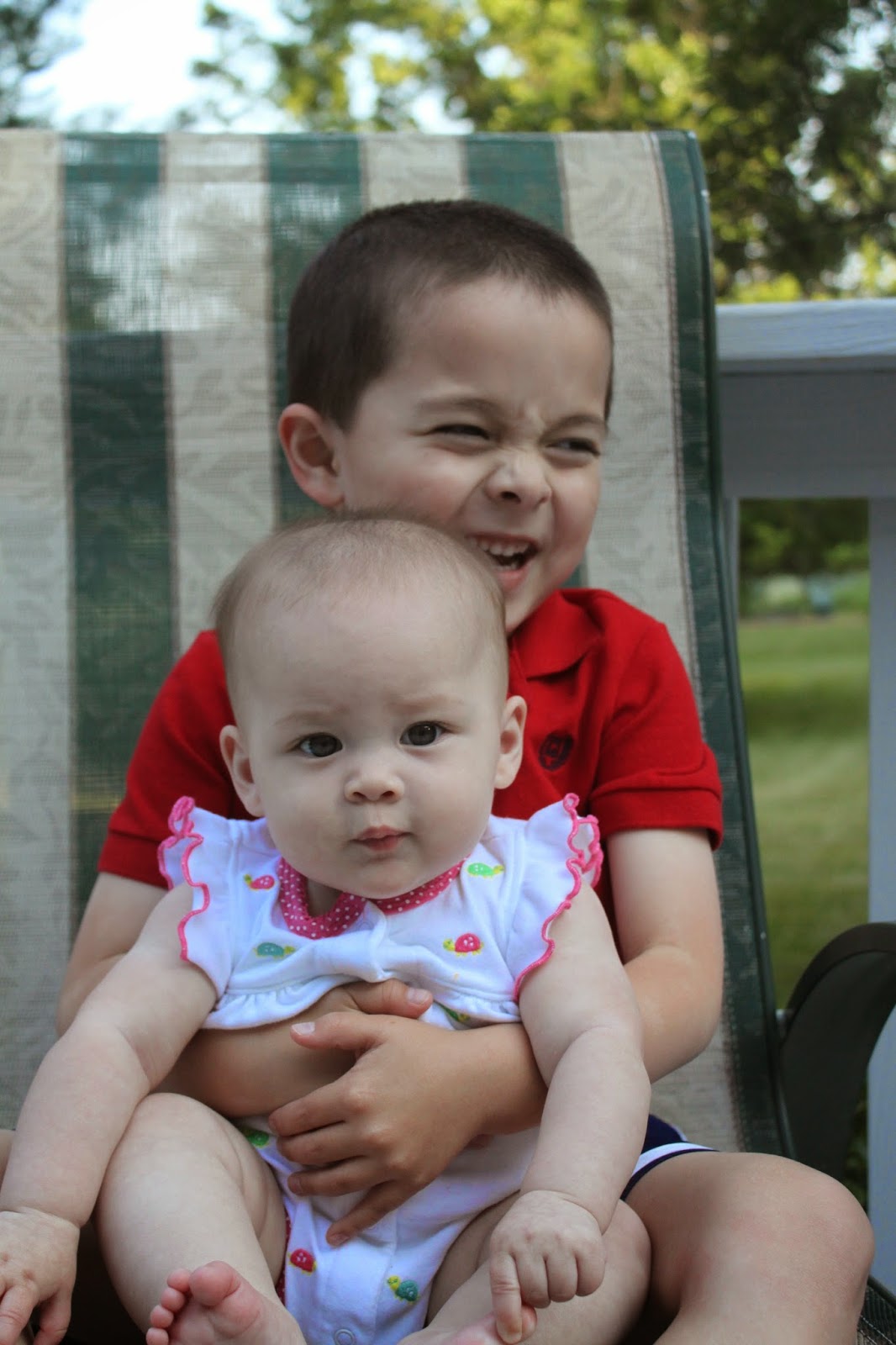 Brian loves to draw and write.  He loves Star Wars so much - even though he has never seen the movie and believes that Angry Birds Star Wars IS Star Wars.  He taught himself the video game "Minecraft" on his iPad and constructs pretty amazing buildings on there.  He loves books and music and playing outside.  He's a great eater and will eat anything put in front of him.  And he's a great sleeper - he's in bed by 7 and we don't see his face until we open his bedroom door between 7:30 and 8am. 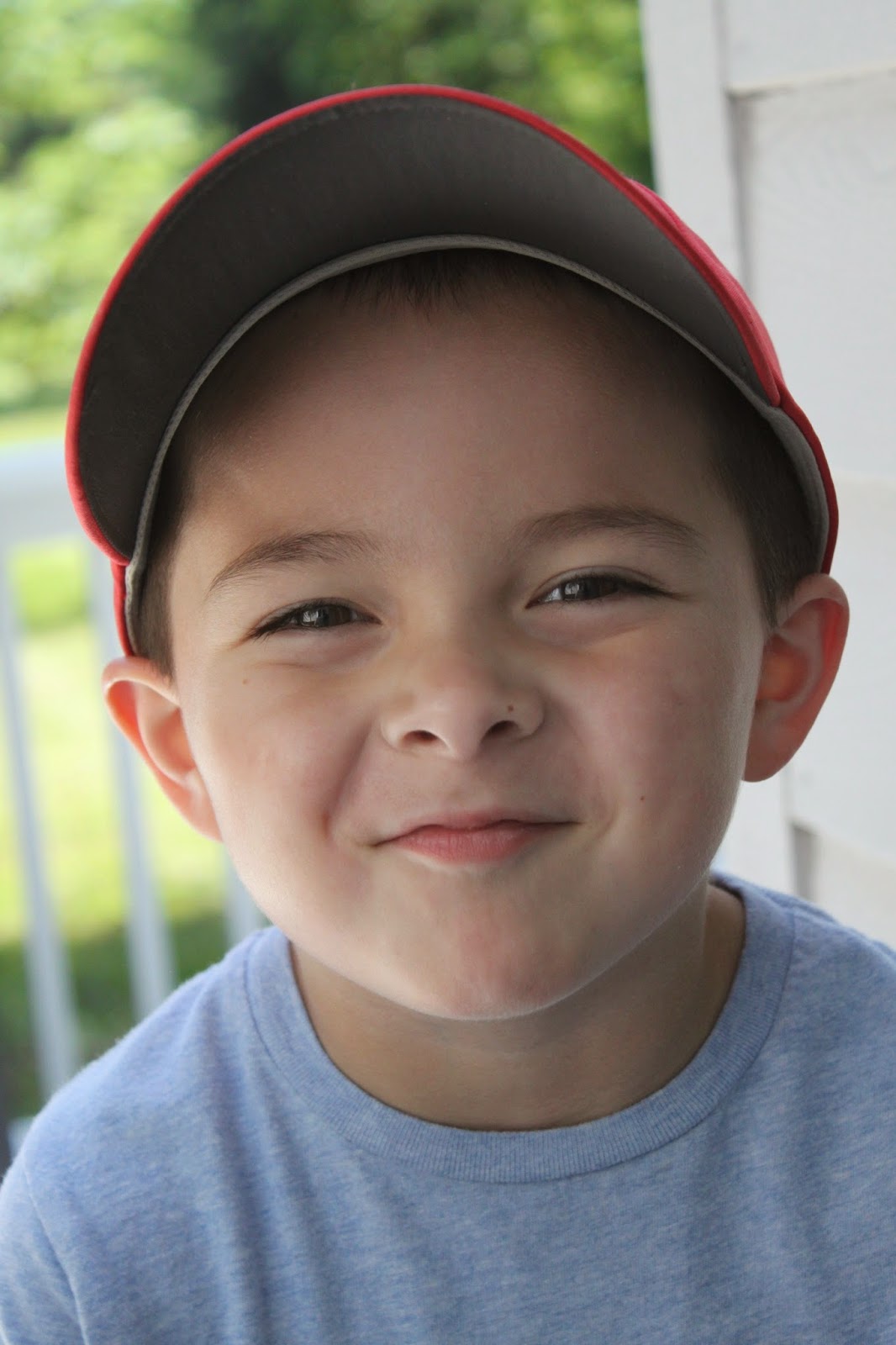 Brian is 5 1/2.  He has made parenting him so easy.  Yet parenting him has been the hardest thing I've ever done.  It's not easy to parent a child who has experienced a tragic loss.  We have made choices from that awful day in the emergency room last April that we never dreamed we'd make.  I almost didn't want Brian to come to the hospital to say goodbye to Gavin.  I had to be talked into it by a social worker - and I'm so glad I changed my mind.  I was so afraid that he would be traumatized by seeing Gavin in such a bad state.  But I quickly realized that NOT seeing his brother to say goodbye would be the most traumatic thing of all. 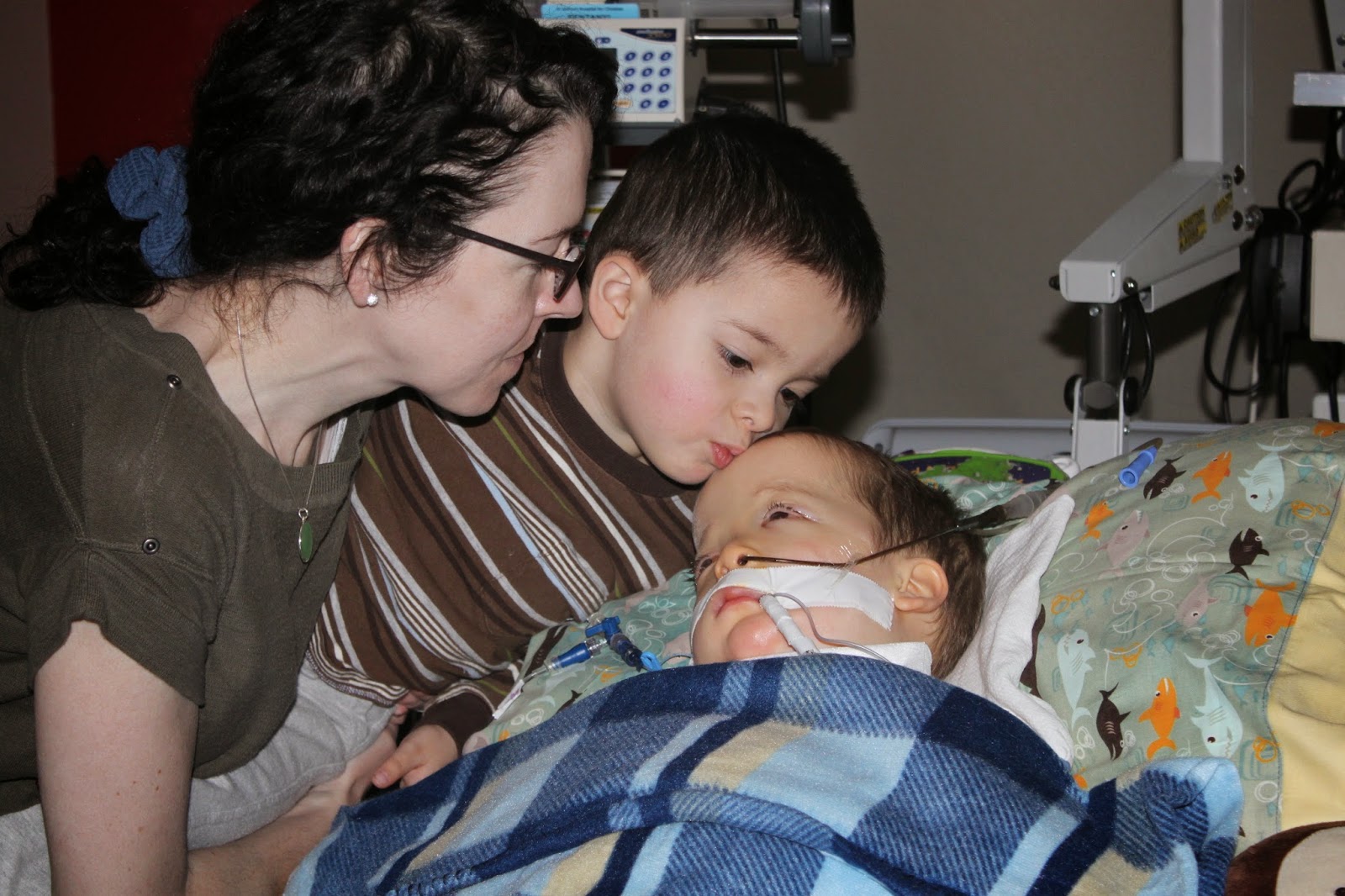 I've given a lot of thought to my "postponement" of Brian's "half birthday" this week.  I said it was because it was such a chaotic time.  That was true.  We had just gotten back from our trip... headed right into a cousin's birthday party... and stumbled our way through a day at an amusement park to celebrate Father's Day.  I've never EVER pushed a "half birthday" aside.  They are important to us for many reasons - all of which I explained in THIS post, which I hope you read before you judge us for "celebrating."

But the real reason I pushed this half birthday?  As silly as it sounds...
I didn't want to face 5 1/2... the same age that Gavin lost his life in a very unexpected, very devastating, very shocking way. 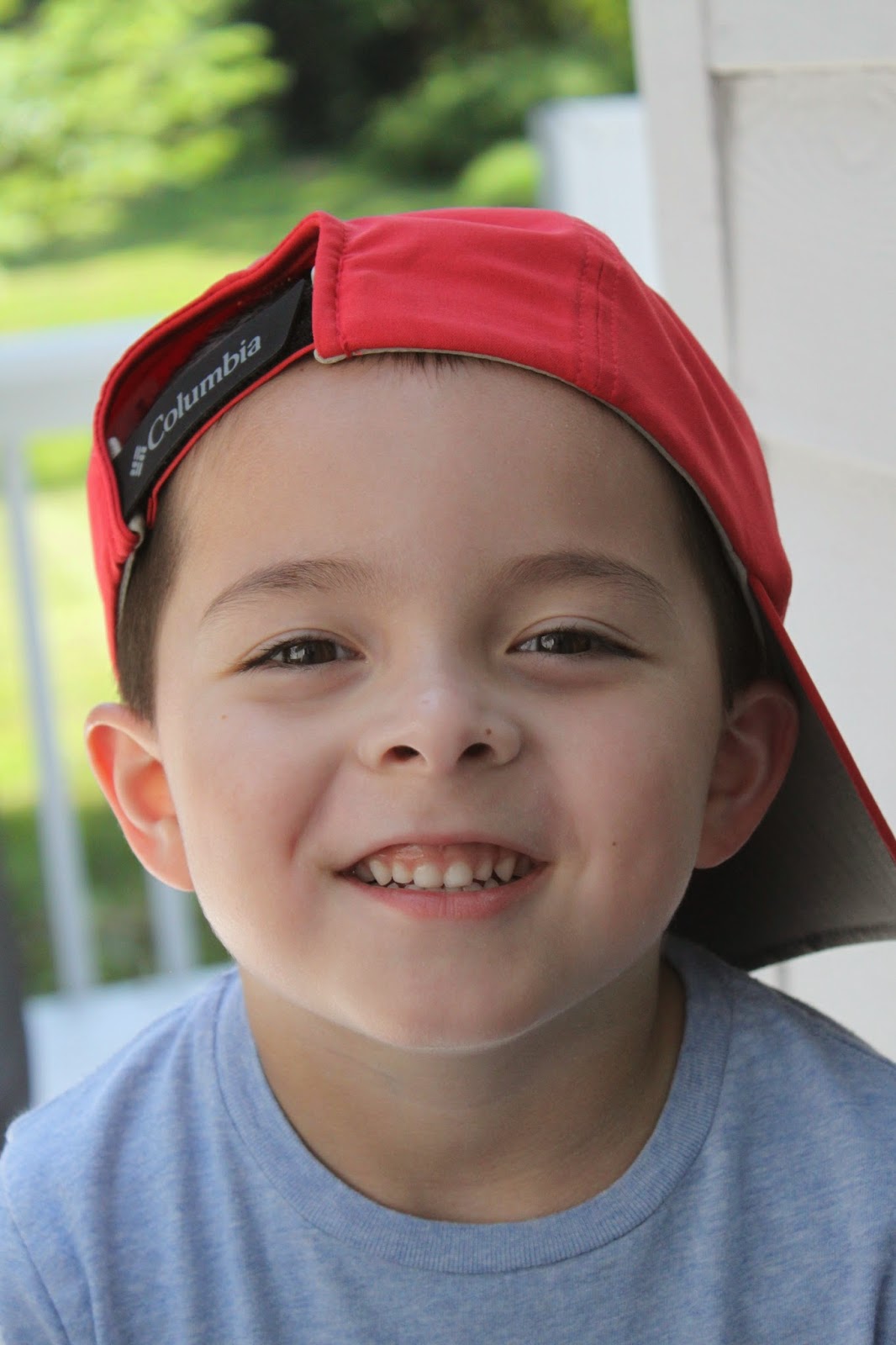 And this is the face of a Mom who worries every day that I will be asked to endure another 5 1/2.  It makes no logical sense.  But then again, grief is not always logical or linear or kind.  I pray every night for patience - with myself.  And I pray that I can continue to parent Brian in a way that will make Gavin proud.  Gavin ADORED his brother - much in the way that Brian ADORES Hope. 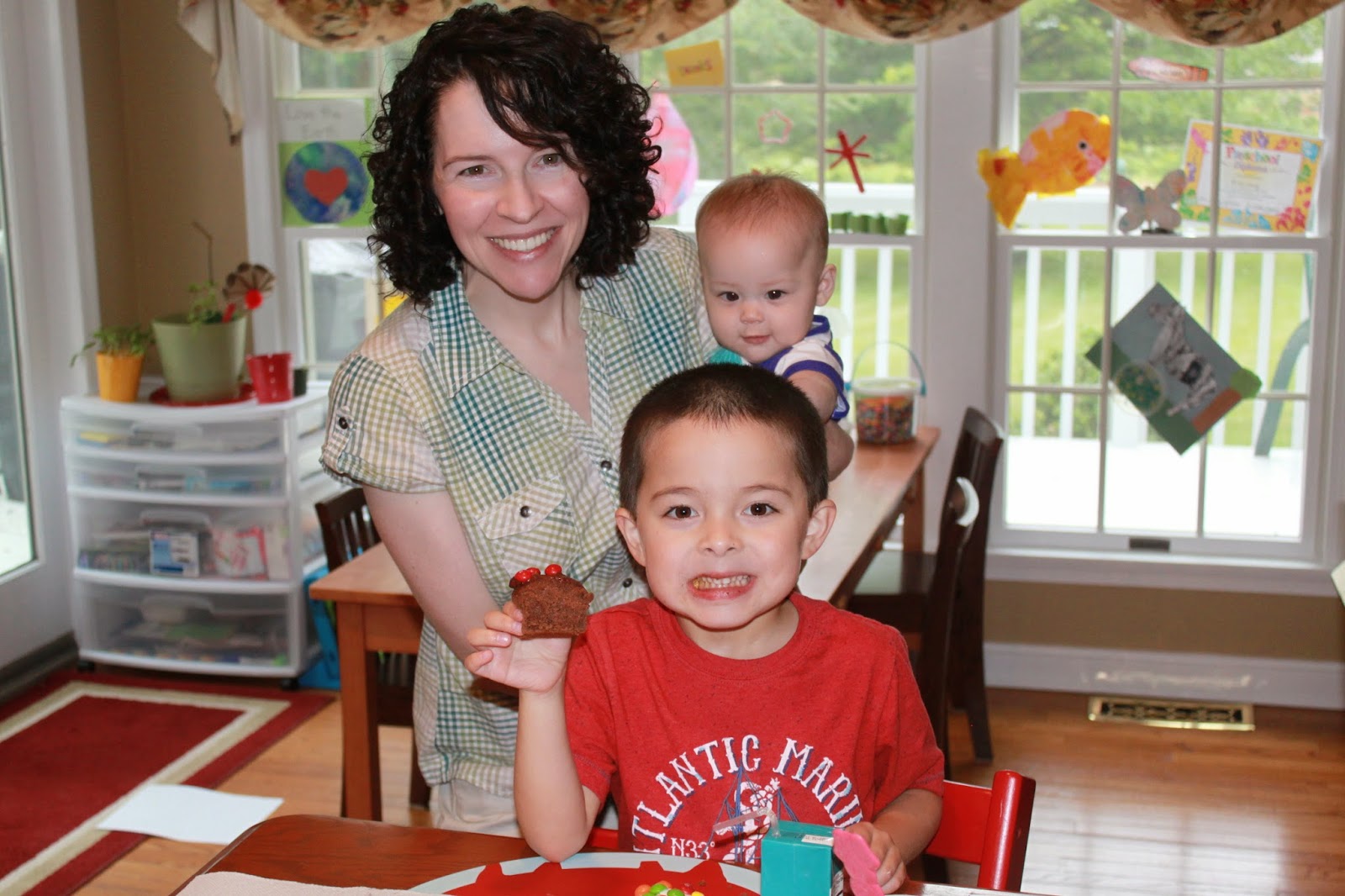 Brian is such a sweet and tenderhearted child.  I hate that he had to experience terrible sadness at such a young age.  We decided early on (probably during that "aha moment" when I changed my mind about bringing him to see Gavin in his final moments) to be open and honest with him.  We also decided to let HIM lead US through his own grief.  For many, many months he asked me to tell him about the day Gavin died at bedtime.  As painful as that was, I obliged.  I think someone designed that path for the two of us... because in a strange way - as we would lay in Gavin's bed holding hands - that nightly ritual was healing for us.  We also still pull the "invisible string" every single night - the same one he made with the social worker in the hospital.  It hangs on Gavin's closet door and each of us take a turn saying something to him... about our day, how we miss and love him, and 'good night.'  If one parent isn't there, the other parent tugs the string for them at Brian's request.

This little boy is so wise.  He knows what he needs - and is brave enough to ask for it.  And, along the way, he teaches us how to be brave.

This is the face of 5 1/2.  And as terrified as I can be when I think of the 'unknown' - I will continue to embrace every day... celebrating life, honoring my children in Heaven and cherishing every moment (and half moments!) of Brian and Hope's every day. 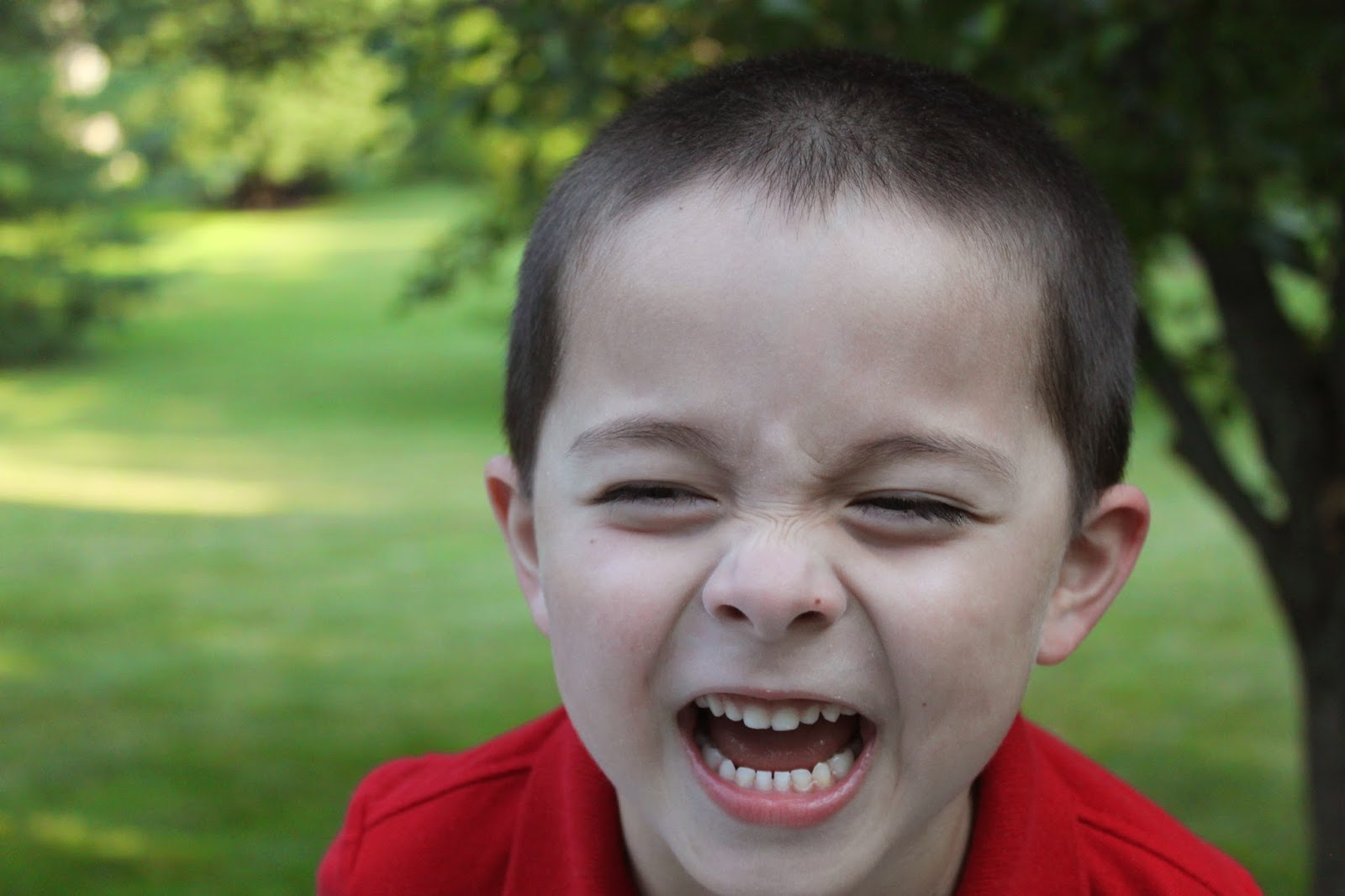 I can do this.

The two of us decided to do something different for your special day.  We had a fun "play date" party!  You invited two of your friends from school, Daniel and Grace.  We talked about this day for a couple days.  You were very concerned that Grace would enjoy herself since you and Daniel are boys and like boys toys.  We decided that we'd make cupcakes and the three of you could have fun decorating (and eating) them. That was something that both boys AND girls would enjoy, you told me.  At the store, you carefully picked out cupcake wrappers that included colors that both of your friends would like. You also wanted to pick out presents for your friends - which is something you always want to do on your special days.  You're always thinking of others.  You picked a fun flying disc toy for Daniel and a colorful necklace for Grace!

We had so much fun baking the cupcakes together when we got home... 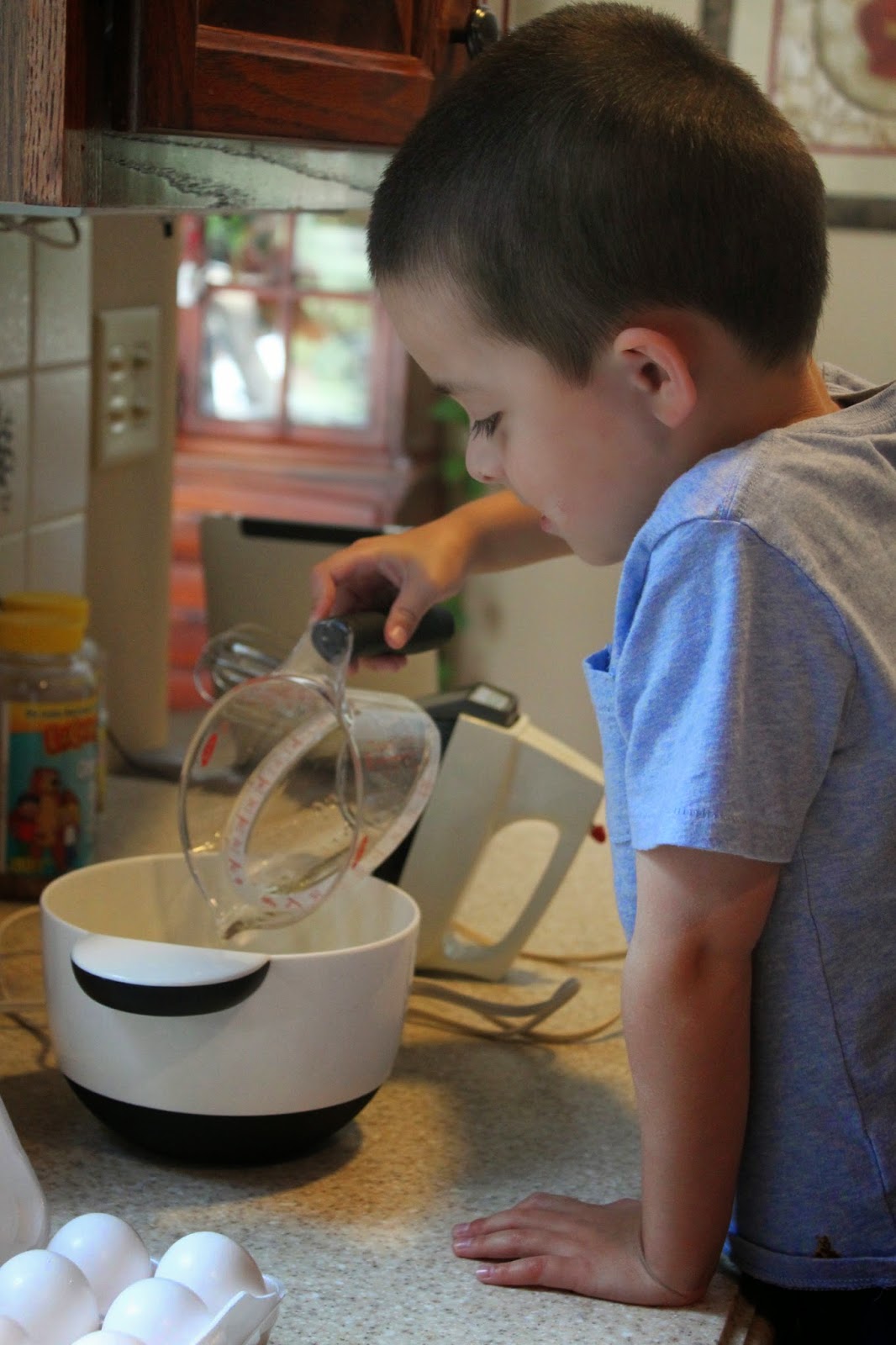 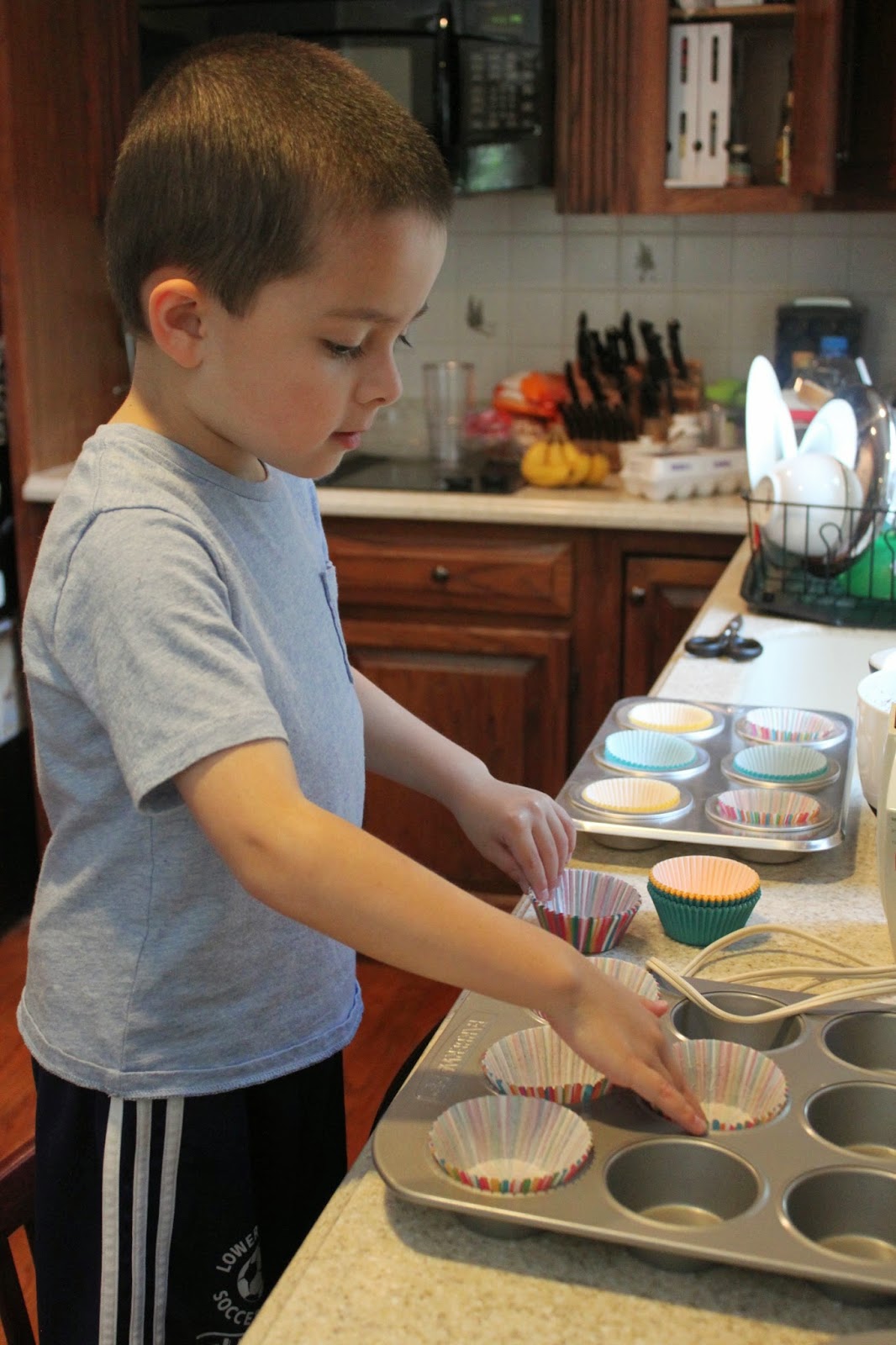 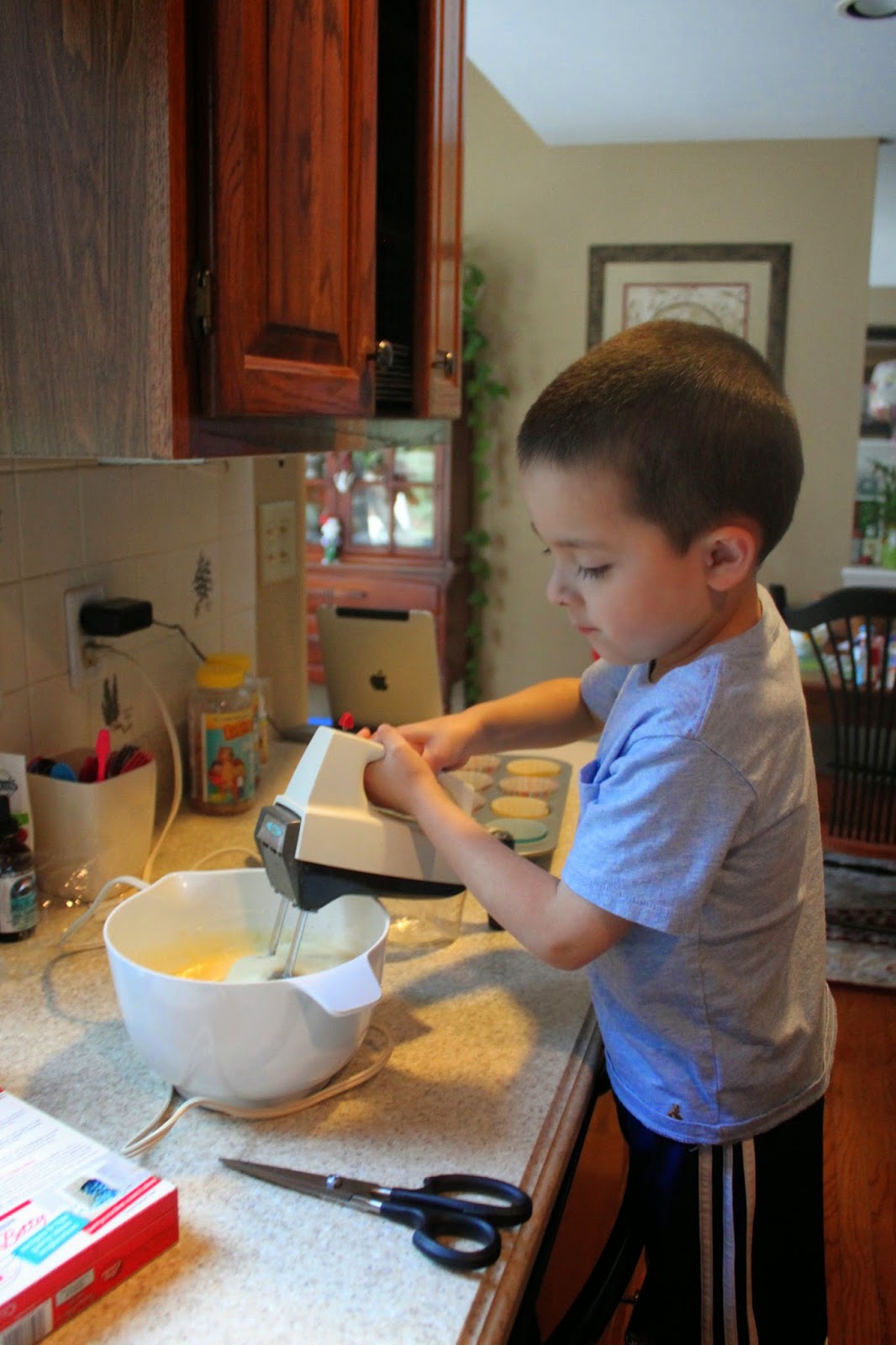 You took your job very seriously - and it showed!  The cupcakes tasted as good as they looked! 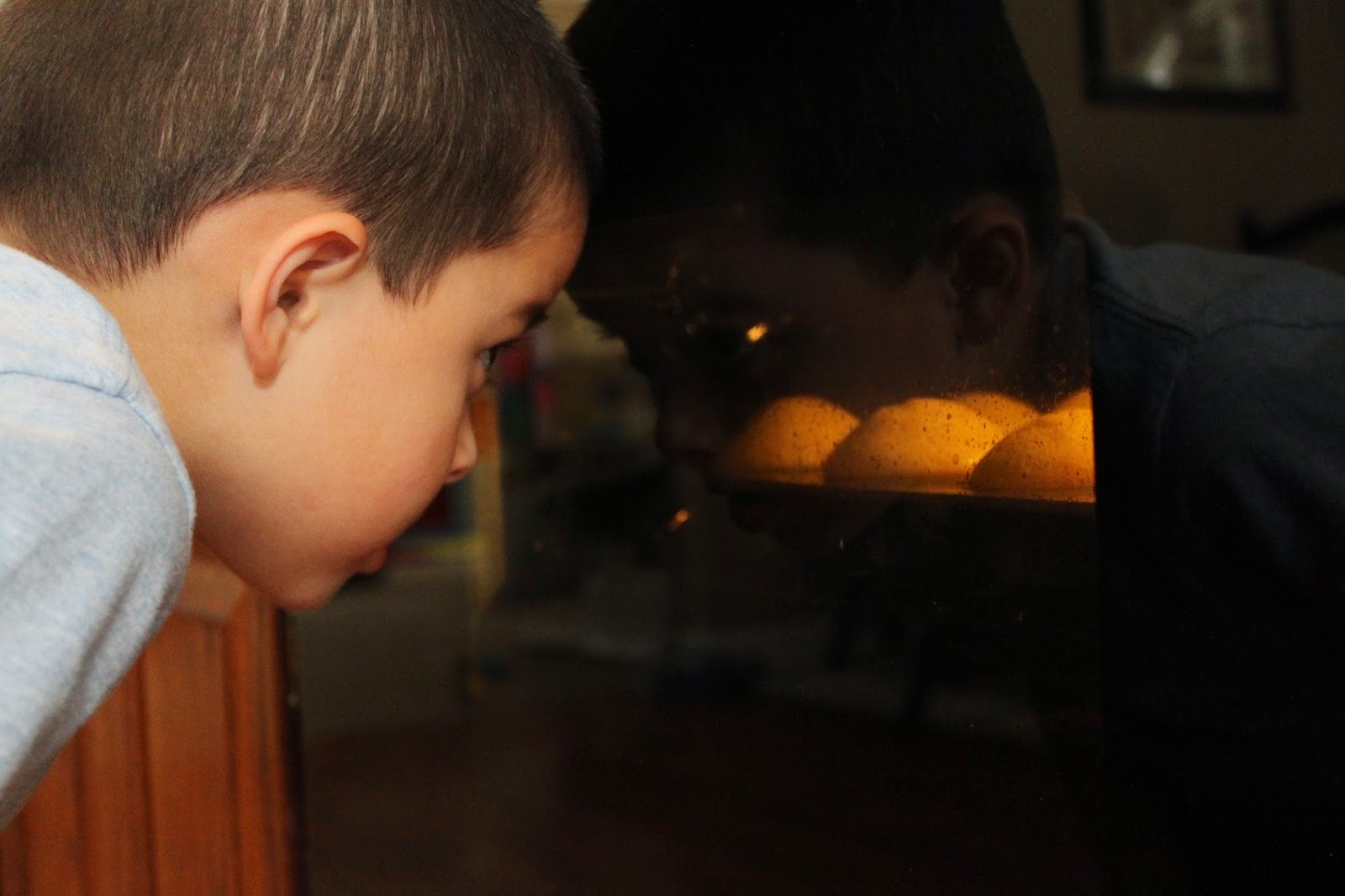 Today was the big day and you were so excited.  The three of you had a great time all afternoon! 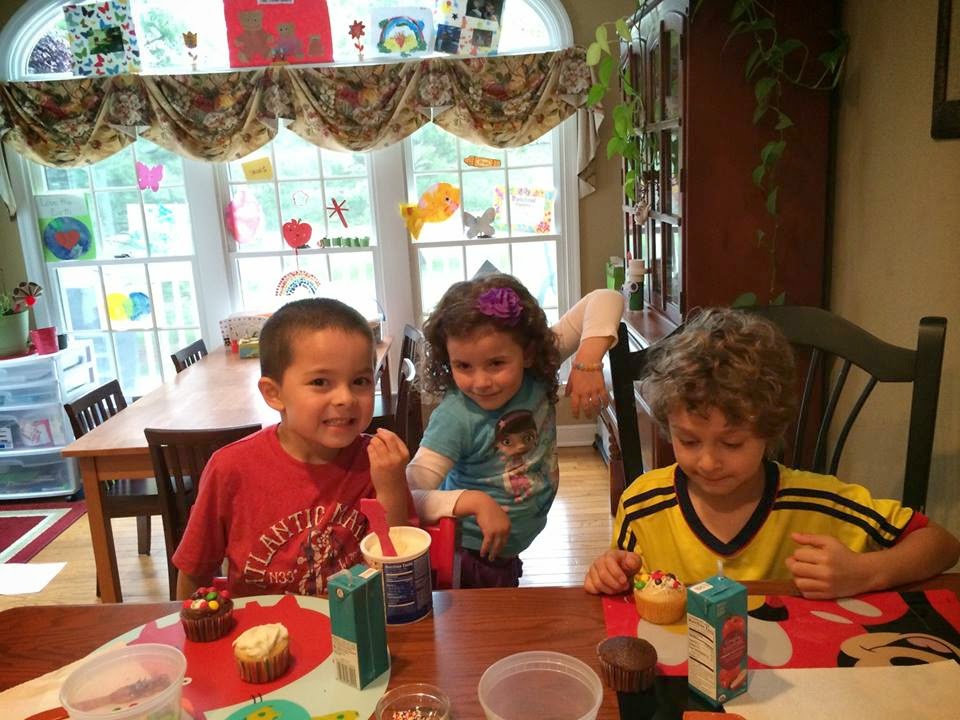 As it turned out, Grace can totally hang with the boys - and vice versa.  At one point, you all had dress up clothes on - a police man, Darth Vader, a fire man... it was hilarious.

The cupcake decorating was a lot of fun.  I'm pretty sure I lost track of how many cupcakes or candy decorations were consumed by all. 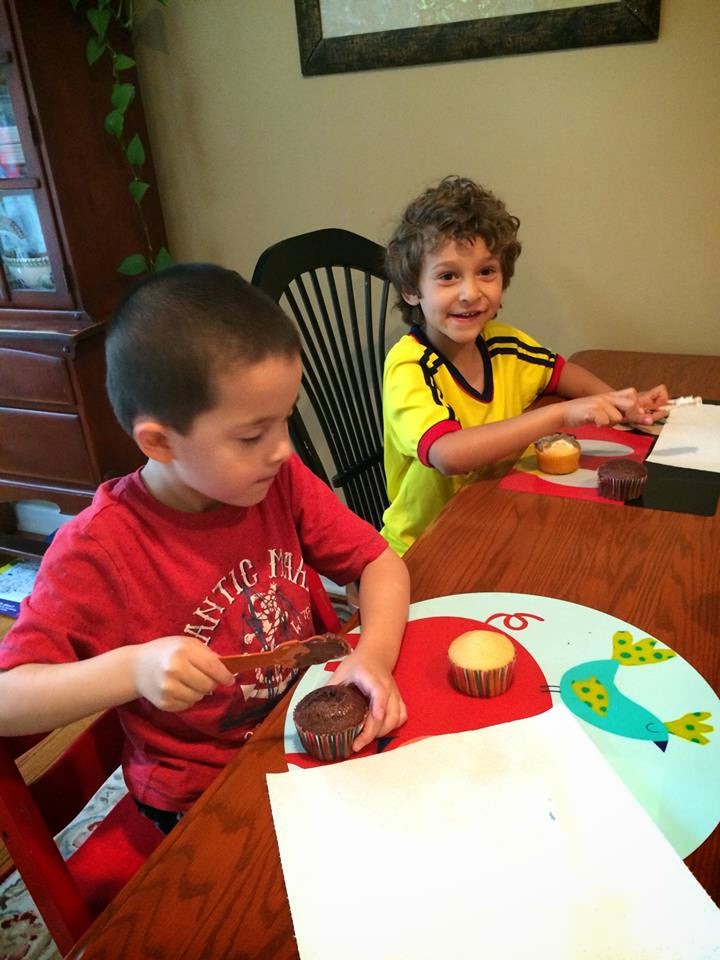 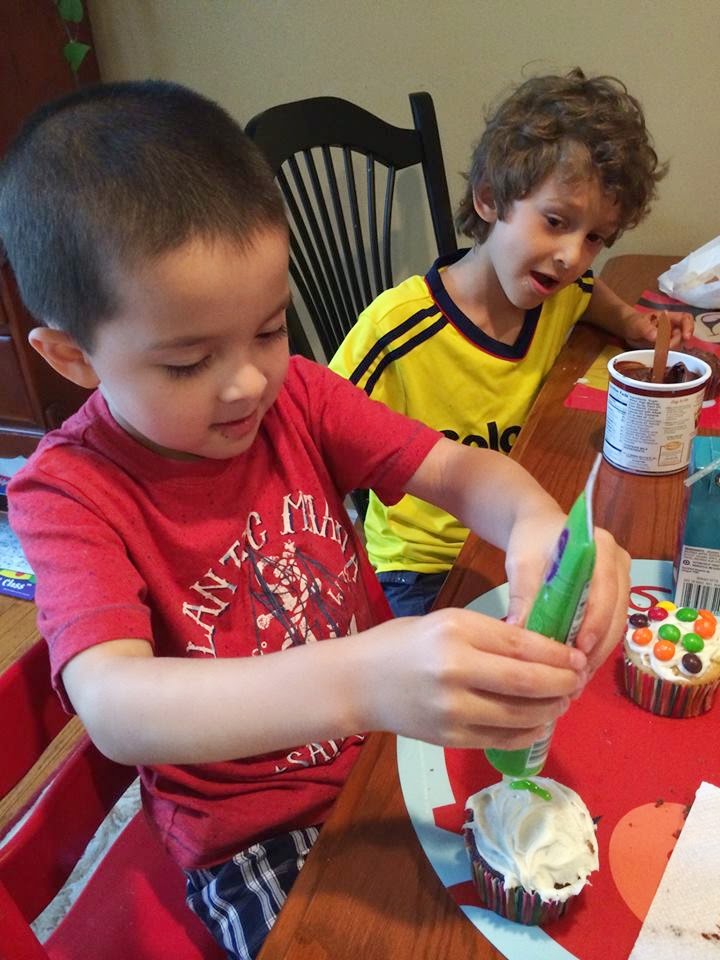 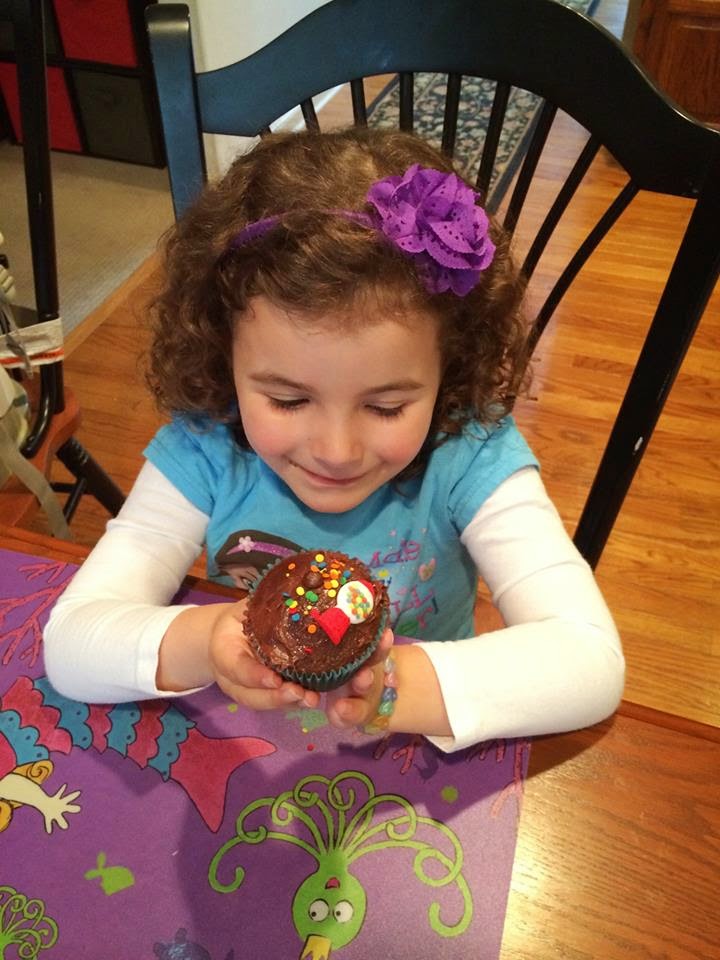 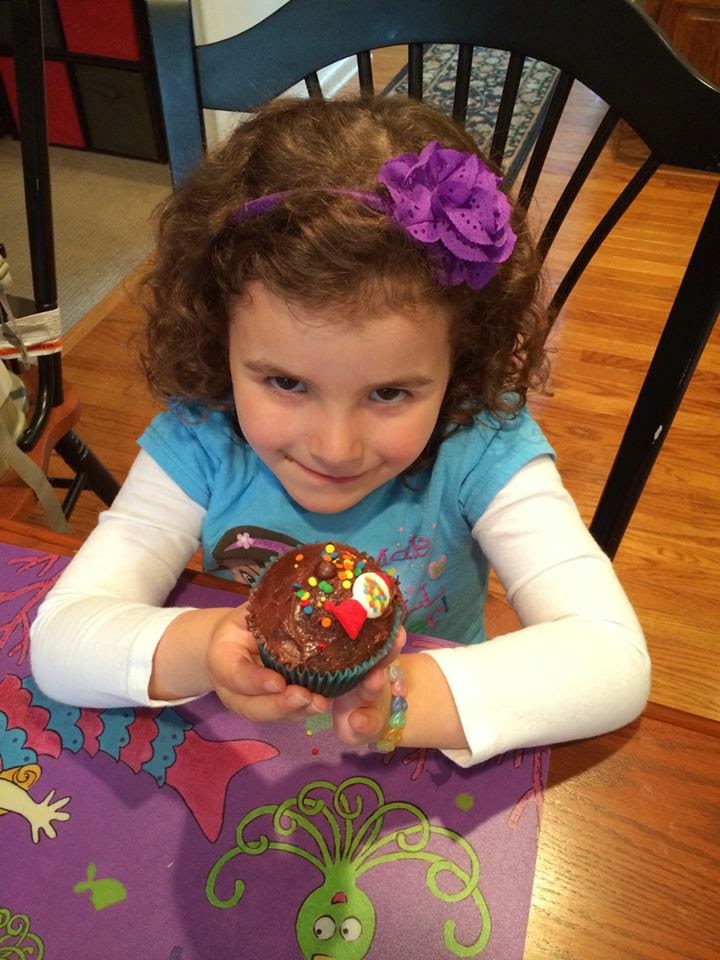 It was such a fun day.

You are now halfway to six.  Halfway to Kindergarten!  You continue to amaze and inspire and challenge me in all the best ways.  I love you so much, Brian.

Posted by Kate from Chasing Rainbows at 10:28 PM