Valentine's Day marked ten months since Gavin died.  I let the day quietly go by - holding him a little tighter inside while publicly celebrating Ed, Brian and Hope here at home.  There are two things that I will always feel... always say... and they are:

I can't believe "x amount of time" has gone by.  It's stating the obvious, but underneath what it really means is... I can't believe my child is dead.  Period.  End of story.

I hate that I will forever have to recycle the same photos of Gavin.  Nothing new.  No pictures downloaded from Heaven to show me if they are keeping his hair cut over his ears like I liked.  If any of his teeth are getting loose.  If his face is "growing up."  I miss his physical body - his smile - his happy, soulful eyes. 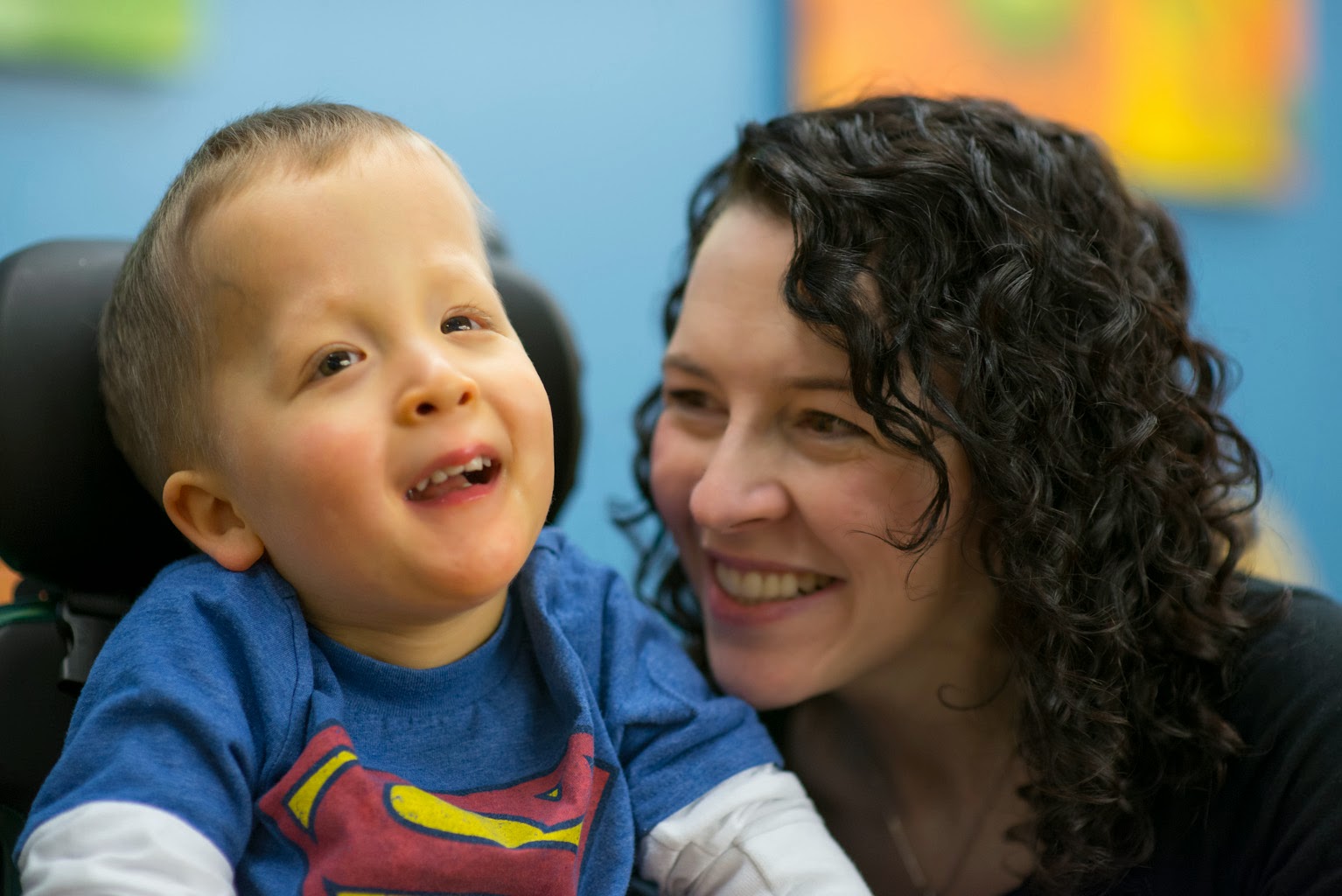 We have reached double digits - 10 months.  That means 12 months is not far away.  One year.  I am hoping to plan something big - perhaps HUGE - that could include all of you in a very special (and fun) way.  I'm also hoping to let you in on those plans as early as this week.  Stay tuned.  I really believe that the one year anniversary of Gavin's death deserves to be acknowledged in an exciting way.  Why?  Because in a mere ten months, so many exciting things have happened in his memory.  We are still overwhelmed and humbled by the outpouring of love and generosity for our little boy. 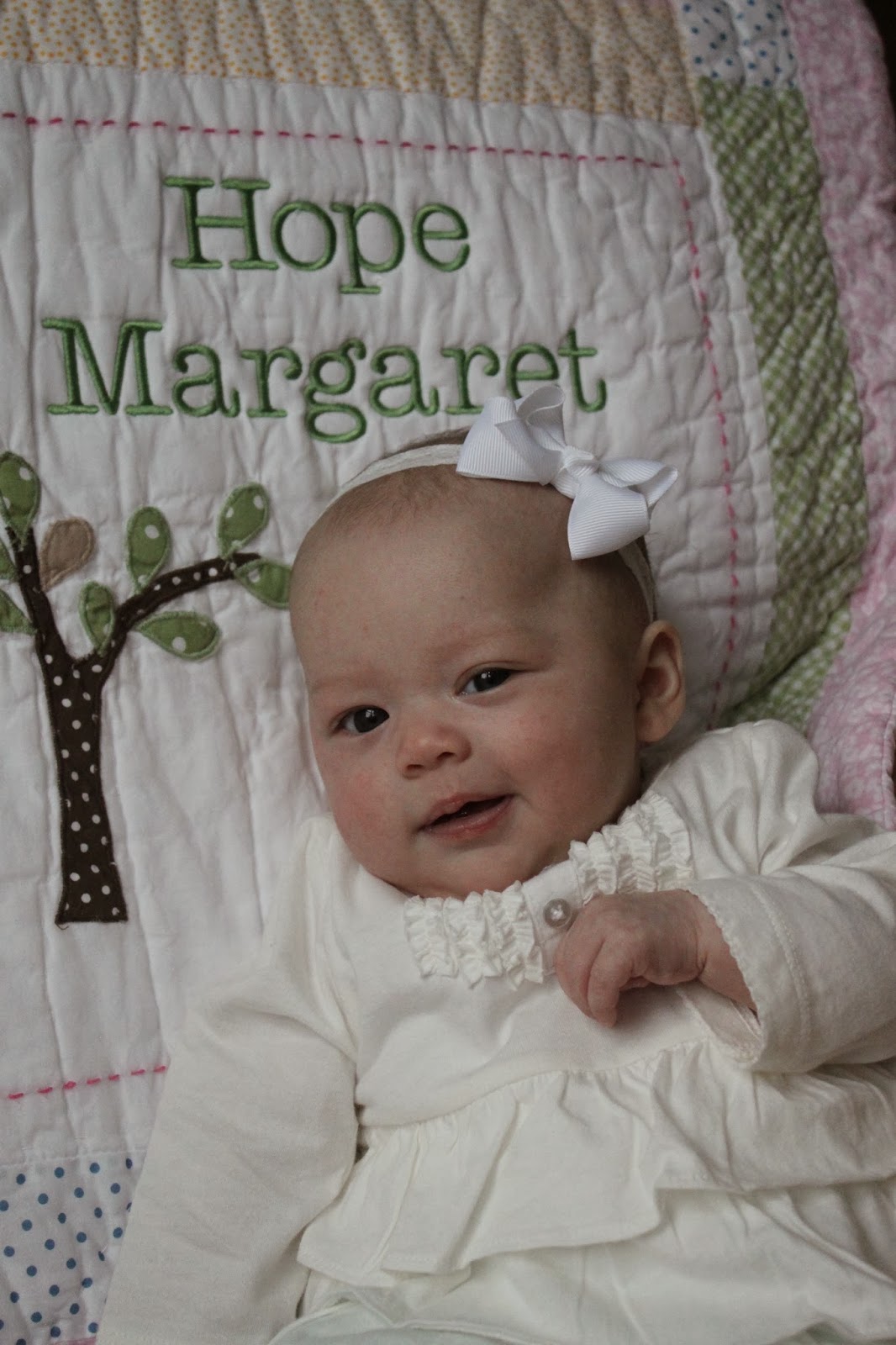 This week she has really changed - a lot!  She's cooing much more... starting to suck on her fingers... enjoying longer stretches of playtime and even trying to bat at her toys.  She has gone up to five hours straight sleeping through the night a few times, which is encouraging!  I would guess she weighs between 10-11 pounds now, but I bet I'm underestimating that.  She feels so heavy to us! 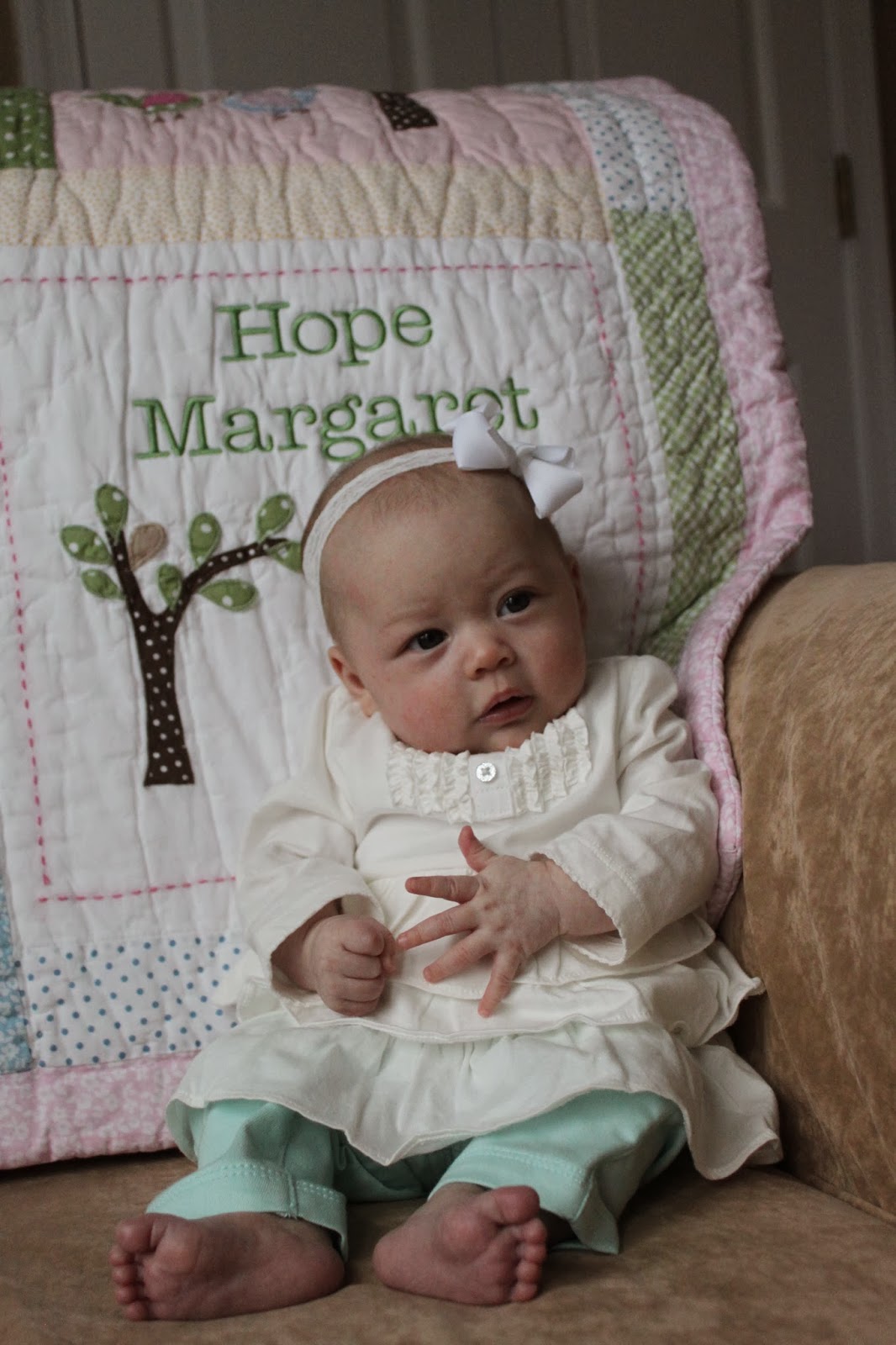 She's such a happy little baby.  I'm not sure we would have let ourselves become consumed with grief after Gavin's death.  But if we did lean that way, Brian and Hope would snap us right back.  We feel so lucky to have these precious children. 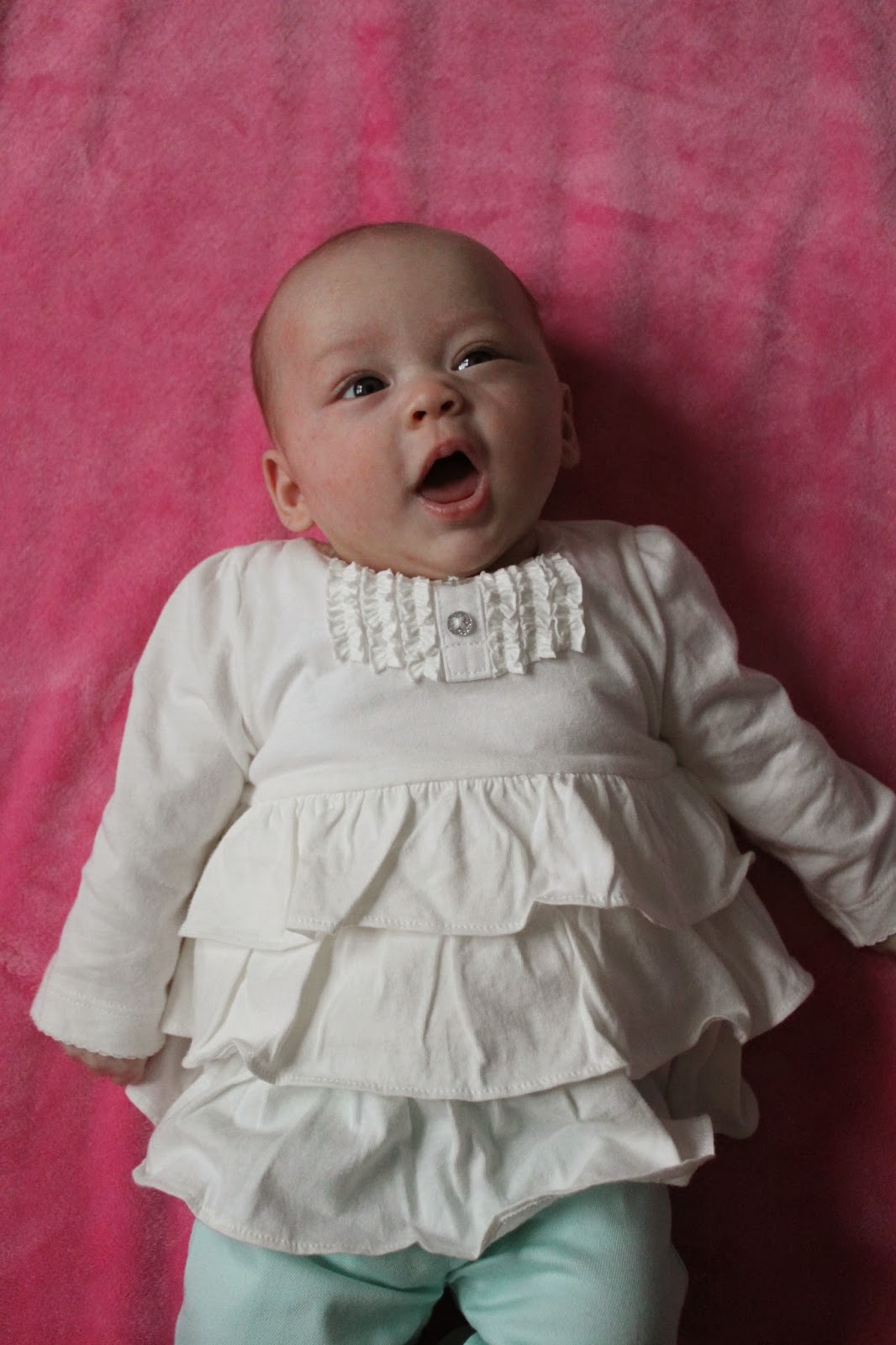 It seems that Hope is very close to a giggle - it could happen any day.  And if it does, I'm sure the first will be for Brian.  She still saves her biggest smiles for him! 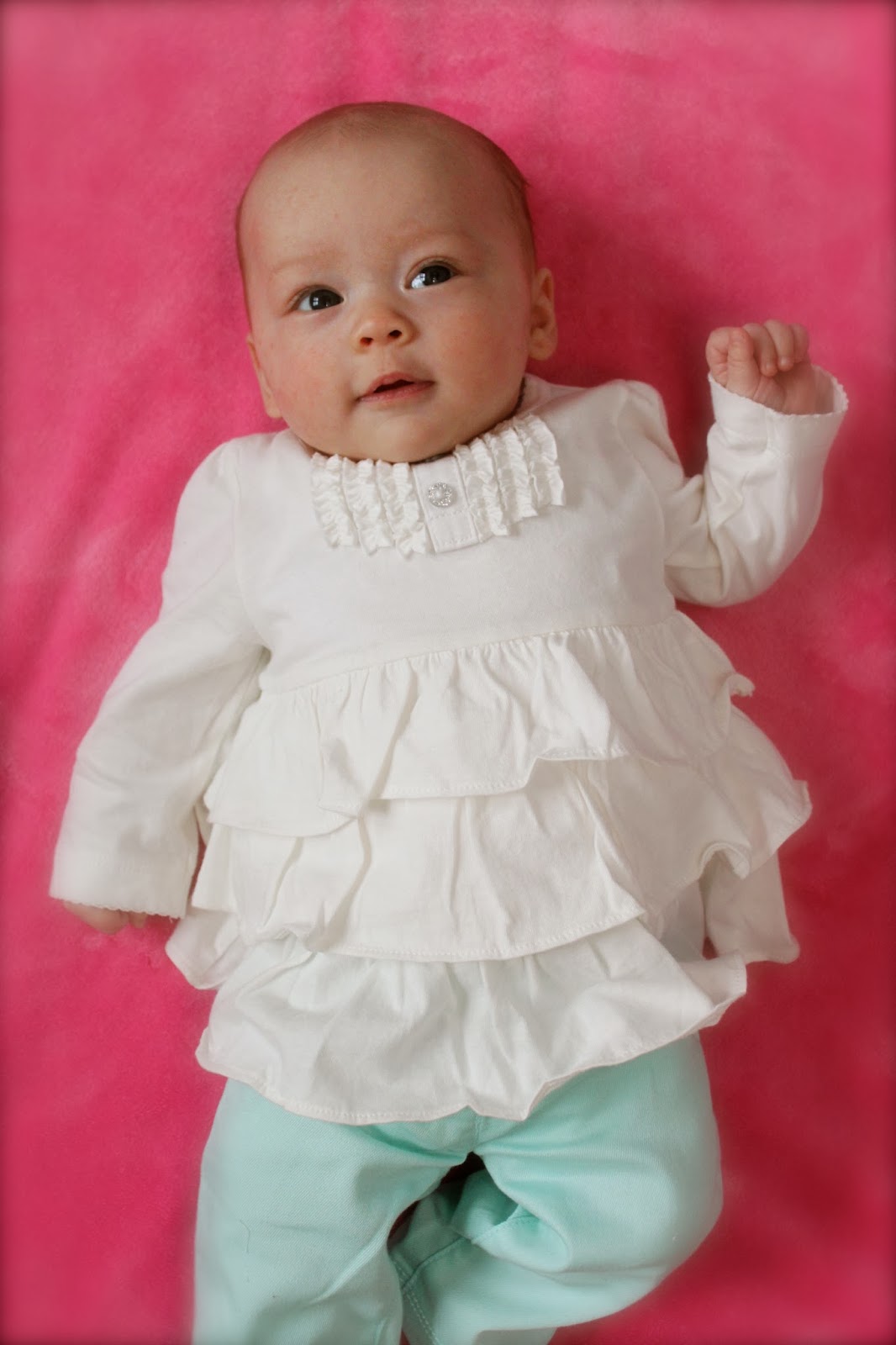 We had a great day as a family at the circus!  I splurged on VIP tickets which put us in the fourth row from the floor.  It was two and a half hours of nail biting, that's for sure.  Brian and I sat with our mouths open watching up to eight motorcycles flying around in a steel cage.  He was amazed... I was terrified that I'd need to explain a tragic accident.  The same with the acrobats!!  I have no idea how they do the things they do - and how they stretch the way they stretch!  It sure is fun to watch though.  Ed and I can't wait until the kids are old enough to enjoy Cirque du Soleil.

As I suspected, I felt uneasy watching the animal acts.  Not so much the dog tricks or the horse acts... but the wild animal acts.  There was a tense few moments between the lion and his trainer that, again, had me terrified that I would need to explain something tragic.  I could just imagine what that lion was thinking... "If you call me 'Princess' ONE more time..."  There's definitely something unnatural about all of it.  To be honest, Ed and I both agreed that they could eliminate all the animals and still have a great show!  We're glad that we went at least once - Brian loved all of it.  He asked for nothing... but Ed and I were suckers for the cheesy merchandise.  Including a toy cannon that you can shoot a toy man out of!  The only thing missing from Brian's prediction yesterday.

We all agreed that Gavin would have loved it today.  The lights... the music... the excitement... he would have been all smiles the entire time.

Hope slept through nearly the entire performance in a carrier I wore.  I had her ears covered the entire time.  I had a brief encounter with a stranger and I mentioned to her that I hoped it wasn't going to be too loud for Hope.  "Are you worried it will be?" she asked me.  I thought for a second and told her... "Well, I'm pushing 44 and, to be honest, my TV is about this loud."  She laughed... but I was actually serious!  I'm starting to feel like my Dad!!

Posted by Kate from Chasing Rainbows at 9:08 PM