The Random Act of Writing Entry...

Some nights I think a journal entry isn't worth it.

"All I'll write is a bunch of random things we did over the weekend - and who wants to read that?!" I think to myself.  Usually out loud which has Ed yell "What?" from the other room and then I'll say "I'm talking to myself" back to him but when I say it the baby cries at exactly the same time which has him yell, "I didn't hear you!" and we go back and forth in circles.  That happens a lot around here.

I SAID - That happens a lot around here.  (Just in case you didn't catch it the first time.)

But some days, that's all I've got - a bunch of randomness.  And - to make matters worse - no picture proof.

So basically, this entry - a bunch or random stories with not a lot of pictures to break it up and make it more palatable - is the equivalent of watching someone's vacation slideshow or looking through an entire photo album of their cousin's stepdaughter's neighbor's wedding.

Are you still with me?  Because I know I'm competing with The Bachelor tonight.

This weekend was pretty jam packed.  Hope met a lot of people!  She met our funeral director on Friday.  We love our funeral director, Randy, and consider him to be part of our big family.  He buried my grandparents... my Father... he picked up our daughter, Darcy, from the hospital and cremated her for us... and he did the same for Gavin.  It's a HUGE blessing to know a funeral director personally.  If we had to blindly find a funeral home and trust a stranger with our children's bodies - that would have been excruciatingly hard for me.  He was there for us in more ways than one when Darcy and Gavin died - and saw us through the viewings and the funeral.  Not an easy job.  I was so happy to visit with him on Friday and bring a little "Hope" into his day!!

Hope also met two of my Aunts this weekend - two of my cousins - a blog reader that saw us in the store and a friend that came over with her son for a playdate!  Social butterfly!

This weekend, I tried to explain who Martin Luther King was to Brian - why he was important - and why we celebrate him on this day.  I attempted this a few times - and each time he walked away thinking that Dr. King was able to turn people white so they wouldn't feel "left out" of anything.  Sigh.  In other news, this is why I will never homeschool.  Ha!

Brian was a great sport this weekend as we schlepped him around to some pretty boring places.  We went shopping for clothes (which is a dreadful chore for ME so I can imagine how bored HE was!).  It wasn't too painful, though, as we were shopping for Hope.  I was on a mission to buy sleepers that zip up in 3 months size.  Having to fasten and unfasten a bunch of snaps - especially in the middle of the night and in the morning - is hard for my arthritic hands.  The zippers are a LOT easier.  I'm sad to say that I have had to tuck away some newborn sized clothes already.  They are getting too tight!!  The next size up - 3 months - is big on her, though, so we're stuck in an awkward phase.  Too big is much more comfortable - so if you see us out in public and are wondering why our daughter is wearing clothes that don't fit... this is why.  And if you see me out in my maternity jeans and my maternity panel is showing because my shirt rode up - be a friend and give me a head's up?  If things go well, I will get away with wearing these awesome maternity pants for the rest of my life.  Can I get an amen, ladies??  (Ha!)

After that excursion, we took Hope on her first "Family Grocery Shopping" trip to Wegmans!  We are a bit odd.  We love going grocery shopping as a family - on the weekend.  As you can see - Hope wasn't all that impressed. 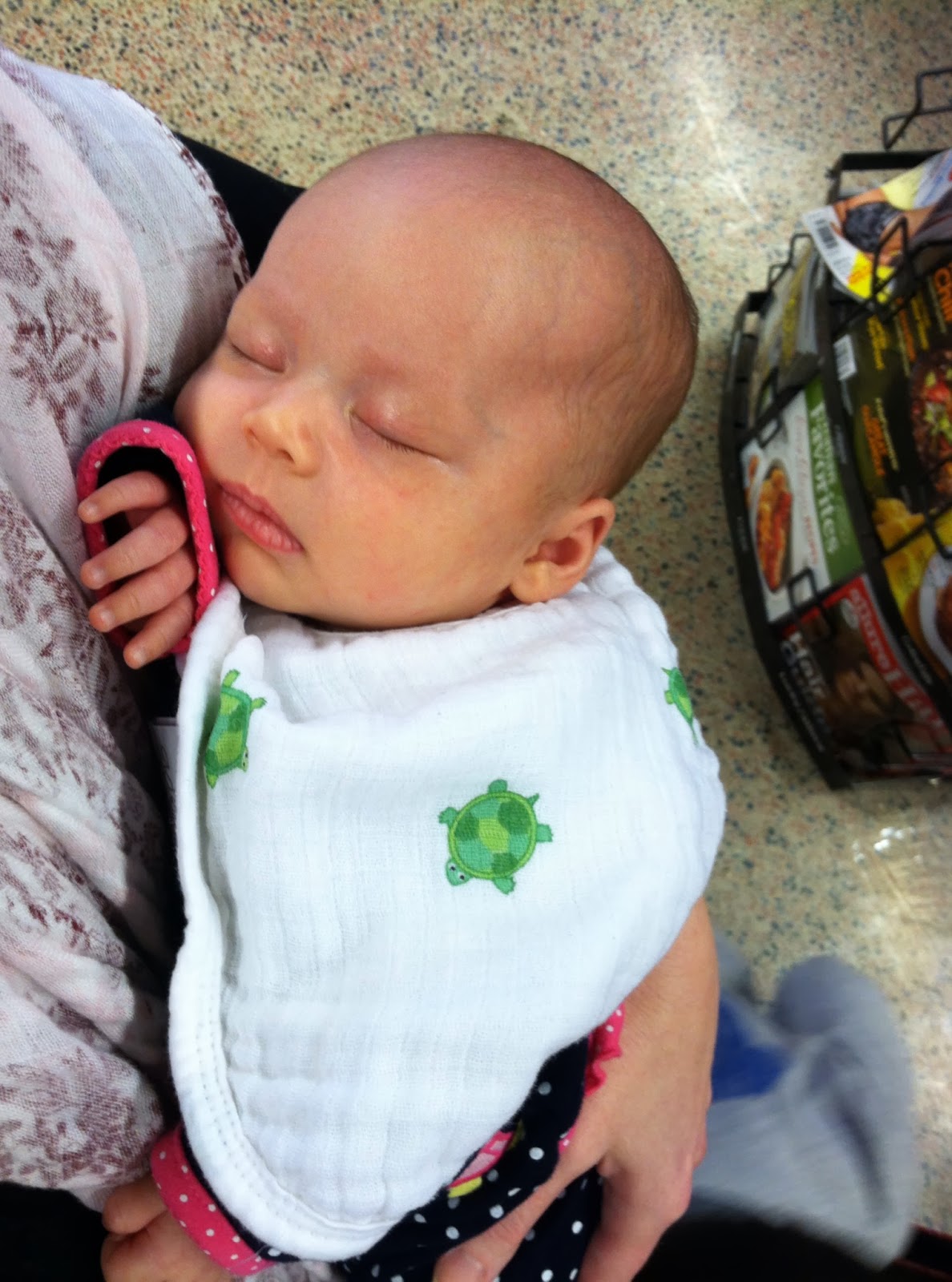 The rest of us had a great time, though!  We even had lunch there!

Today had us out shopping again - this time in my home town mall.  We headed to the food court for lunch and I found a table that had the most privacy.  Unfortunately in this food court, there was really NO privacy - but this table did have a couple plants nearby making it the "most private" of all.  Hope was ready to eat and I was feeling brave and confidently decided that I could cover up and nurse. We were doing great... I managed to latch her on and everything was fine.  At one point Brian wanted to say hi to his sister and pulled the cover up from the bottom and I laughed and tossed my hair and thought, "I so got this - I bet people are looking over and are so impressed with how I'm handling myself."  (ha!)  I pulled Hope out from under the cover in one expert move - I was amazed at myself - to burp her.  All this time Ed was getting our food - but I was wishing he was there with us to witness my nursing in public skills.

And then it happened.

Hope burped and I brought my head down in front of hers, smiling and tossing my hair again, to say cutely "Good burp, cutie pie!" Suddenly it happened.  Mount Vesuvius erupted from her tiny little mouth.  Unfortunately, catching her spit up waterfall was my biggest priority.  Ironically, NOT seeing my breast was a priority to the people sitting nearby.  Whoopsie!  I joked on my Facebook page today that the people at the table nearby looked horrified - but I was kidding.  There was an older woman who brought her hand to cover her mouth - stifling her giggle.  And once I covered up again and caught her eye, she smiled and winked at me.  That knowing kind of "I've been there" wink.  I have to say - the entire event was pretty hilarious.  But I did stop confidently tossing my hair after that.  And, no... there is no photo proof of any of this.  At least I hope not.

It just so happens that Aunt Bean lives near this mall!  When I told her we were there, she hopped in her car with Shannon and Claire (my nieces) and they came down.  While we were waiting, Brian and I rode the carousel two times.  He wanted to go on the spinning seat and I was totally game!! 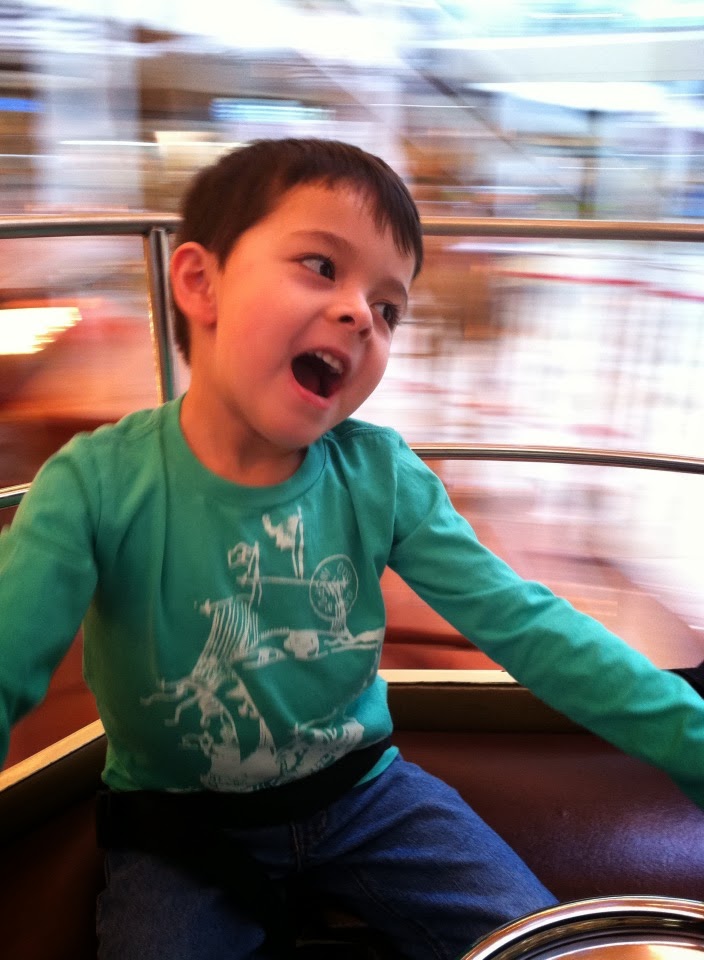 Until he wouldn't stop spinning.  Boy, I am getting old. 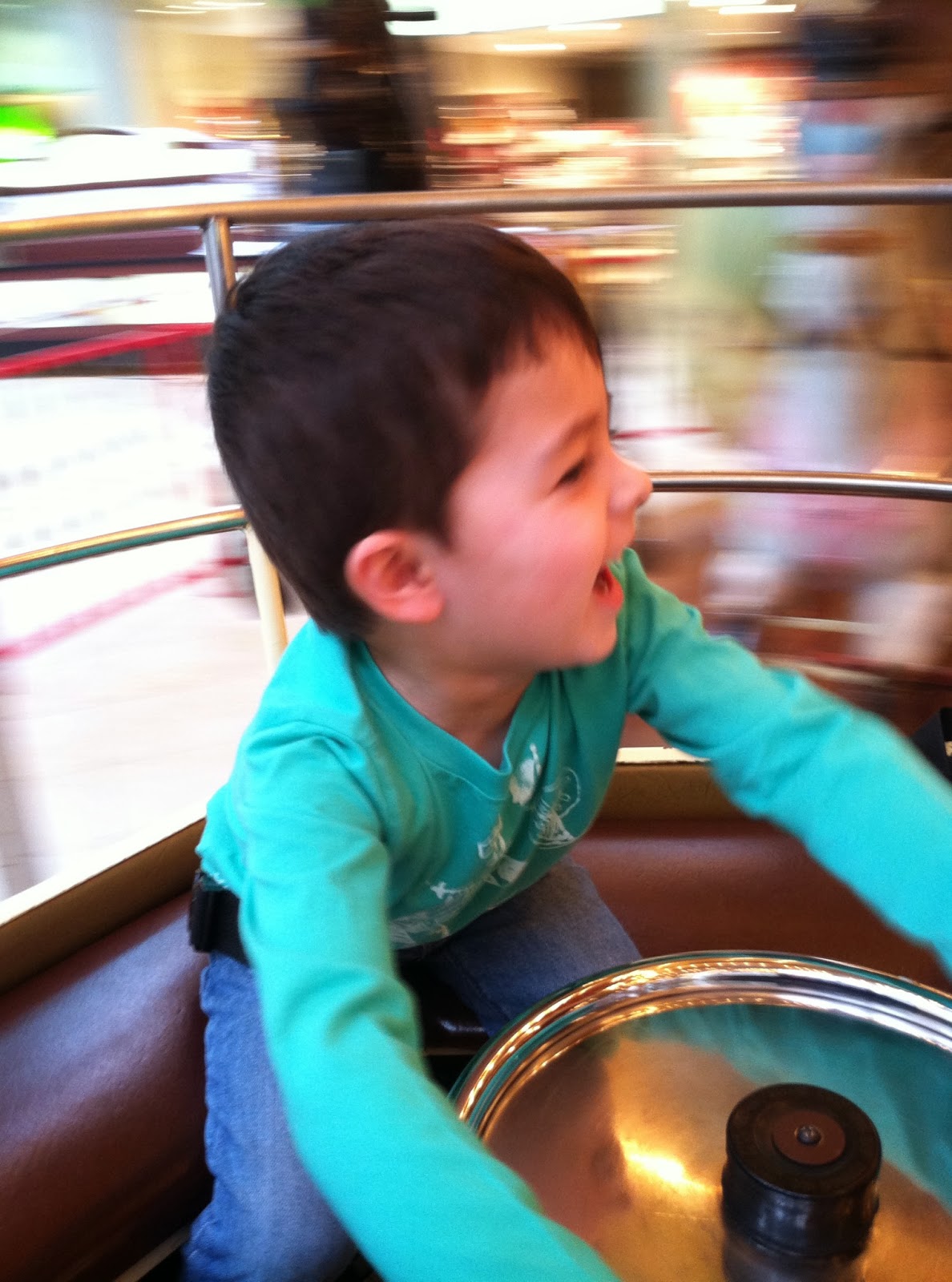 I was never happier to see Shannon and Claire and immediately recruited them to ride with Brian. Ahh... youth. 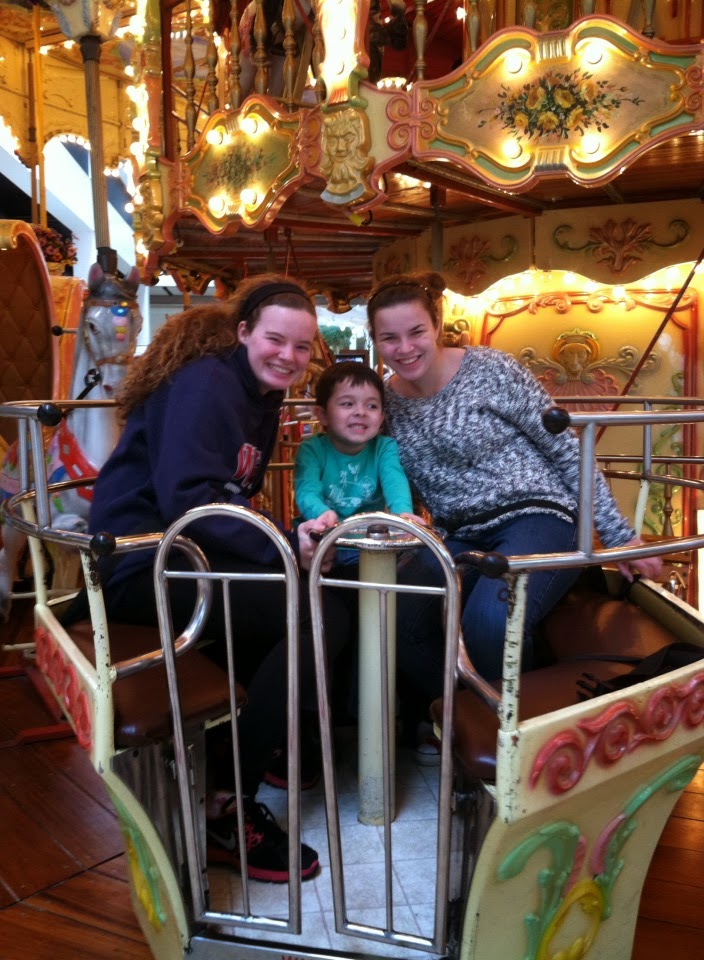 I'm hoping to get both of my chickadees in to see the pediatrician tomorrow.  Hope has developed that baby acne all over her face and it just seems worse than I remember Gavin and Brian's.  I also want to have her umbilical hernia checked - just to make sure it's still nothing to worry about.  But it's really Brian that we're worried about.  In the winter time he has dry patches behind his knees - that's nothing new.  But tonight when we were getting him in his pajamas, his dry patches covered his entire legs!  It looks awful!  I can't think of anything new that he ate or was exposed to.  I work hard to keep him moisturized even though I know this is probably more of an internal reaction that shows up on the skin. He said it itches - but otherwise doesn't seem too bothered.  Hopefully it's an easy fix.

And there you have it, folks.  My random act of writing for tonight.

Posted by Kate from Chasing Rainbows at 8:35 PM