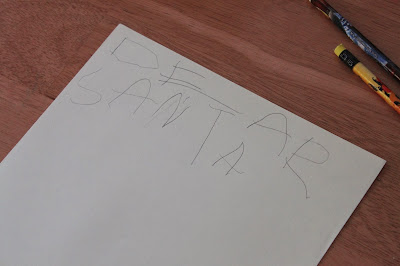 This morning, Brian and I worked on his letter to Santa Claus.  He took it very seriously and it had to be "just right." 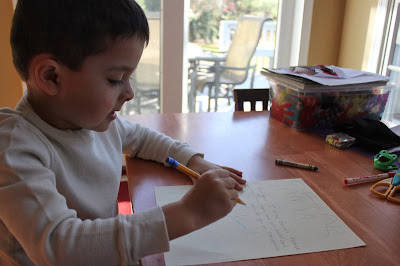 He asked me to write the note portion as he dictated it to me.
Dear Santa, I love you.  I miss Gavin.  Please bring me Star Wars and art stuff and stickers.  I will listen for you on Christmas Eve.  Love, Brian 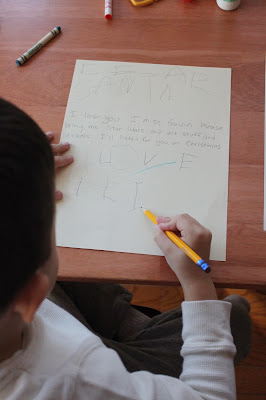 Brian was SO excited to visit Santa and wanted to be sure he asked him about visiting Heaven and bringing presents for Hope. 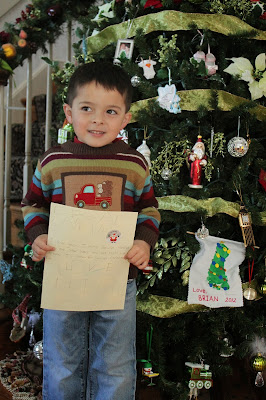 We got there early before the big crowds and anxiously stood in line waiting for our turn.  I told Brian that I was going to go first to talk to Santa so I could tell him what I thought Hope would like for Christmas.  But in reality, I wanted to sit with Santa to fill him in on Brian's thoughts and feelings.  And that's when things turned magical... 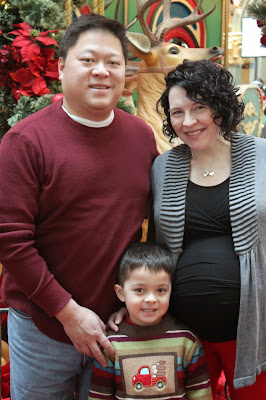 Last year we had two experiences with this Santa.  The first time, I found myself so distracted with getting the right photos and trying to get Gavin to smile and wanting to capture the moment - that I truly "missed the moment" entirely!  You can read that entry HERE.

So, a few days later - I had a "Santa Do-Over."  I brought little "cheat sheets" for both boys, left my camera at home and listened... really listened.  I listened to what Santa said to Gavin.  I memorized Gavin's expressions and his clapping.  I listened to the conversation between Santa and Brian and marveled that Brian thought of Gavin when he gave Santa his list of "wants."  You can read about that special day HERE. 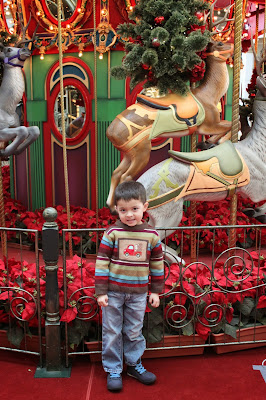 After our visit, I wrote this Santa a letter.  He spent so much time with each of the boys - he remembered every detail from my little cheat sheets - and he made the whole experience so magical.  For Gavin, especially, I wrote to him in my letter.  I told him that Gavin didn't like being held in one place and was usually pretty squirmy.  But he had such a calming presence - and when I told him that Gavin loved music, he actually started singing.  Gavin instantly melted into his arms and smiled - completely mesmerized.  I wanted him to know that special people are called to be Santa - and he clearly answered that call.  I just wanted him to know how grateful I was.

So today... as I sat next to him on his huge chair... I started to tell him about Brian when he stopped me.  He knew.  He remembered us.  He thanked me for my letter and told me how much it meant to him.  He said he has told the story several times since last year about the little boy with special needs that was fidgety until his Mom said to sing to him - and then he was completely calm.  I told him that Gavin had suddenly and unexpectedly passed away and he was so sad.  But he remembered him.  I couldn't believe it. 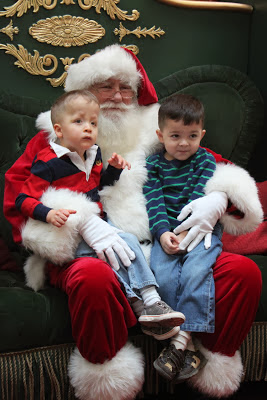 We gave each other the biggest hug and he patted my belly and I introduced him to Hope and he smiled.  I got up and walked over to Brian to take his hand and my eyes met up with Ed's.  It was hard for us to hold it together.

Brian sat with Santa for quite a while.  Santa reassured him that he does make it to Heaven and Gavin will have a wonderful Christmas there. 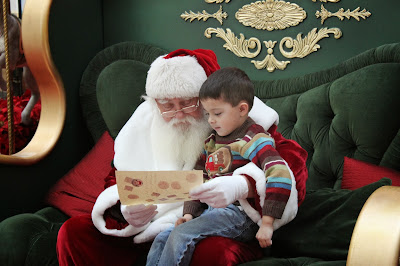 They talked about Star Wars and Brian's wish that his little sister have presents under the tree. 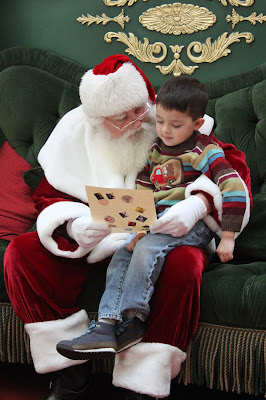 And then he told Brian that part of being a big brother is helping Mommy with all the stinky baby diapers... to which Brian started laughing hysterically. 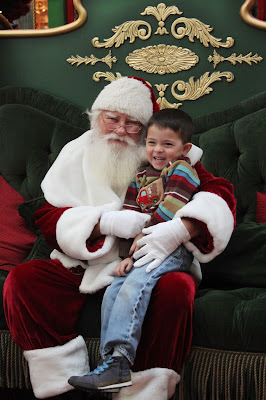 Today was not easy for us - but it was magical.  And Gavin was there.  I know it.

Posted by Kate from Chasing Rainbows at 3:25 PM