On Friday morning, Brian and I went to his new school for "Meet the Teacher!"  He was very excited.  We were told which classroom to go to and as we rounded the corner, we were greeted with this bulletin board... 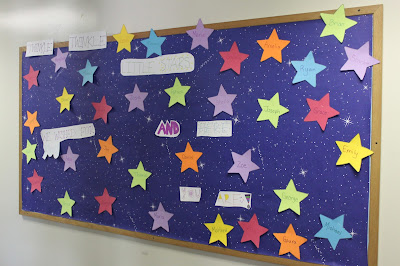 Each star has the name of a child attending the preschool and it says, "Twinkle Twinkle, Little Stars.  We Wished For You And Here You Are!"  It took me a minute to swallow the lump in my throat.  Twinkle Twinkle was one of Gavin's favorite songs... and seeing it on that beautiful blue bulletin board was a sign to Brian and to me that he was there with us.  I don't think it's a coincidence that they chose that theme... just like I don't think it was an accident that when I went to visit the school as a prospect for Brian there were butterflies everywhere.  In every classroom and all over the bulletin board.  Gavin is all around us - always.

Brian met his new teacher, Miss Kristen, and she's very nice!  Brian has a stuffed dolphin at home in his (Gavin's) bed that reminds him of Gavin and the ocean.  Miss Kristen has the same, exact dolphin in her room and Brian noticed it right away.  (Right?!?  I know!!!!!  He's everywhere!)  He talked about it on the way home and I think it made him feel a special connection with his new teacher. 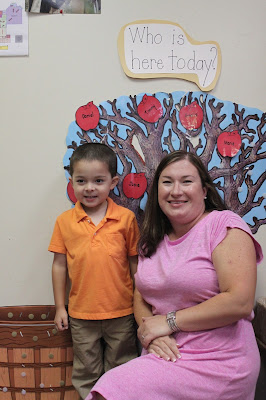 The classroom is adorable and very organized and bright.  We were happy to find out that one of our neighbor's little boy is in Brian's class!  There are eleven children - six boys and five girls.  After hanging out in the room for a while, the parents left for a meeting to go over the manual, activities, fees... the usual.  It gave the kids a chance to play and interact with each other and the teachers.  When I told Brian I was leaving for a while, he jumped up and took my hand and started walking with me.  I knew what he was doing, but the teacher and the aide both reminded him that he was going to stay in the room and that "Mommy will be back."  I smiled and told them, "Oh - he's fine!  He's just walking me to the door.  He's always the gentleman."  I'm so fortunate that neither of my children ever had stranger anxiety.  They were both very "go with the flow."

Brian's first official day is Monday and he's really looking forward to it. 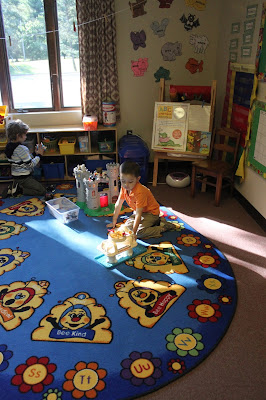 Later that afternoon, the two of us took a trip to DuPont to get Brian's hearing checked.  He had a speech delay that has since resolved and I got him a hearing test about one and a half or two years ago - but he was so little.  And part of the hearing test is so subjective.  I thought it would be a good idea just to have it checked once more now that he's talking and better at following direction.  And, to be honest, it didn't hurt that it was at "Gavin's Hospital."

Just as suspected, Brian cooperated fully - and his hearing test was completely normal. 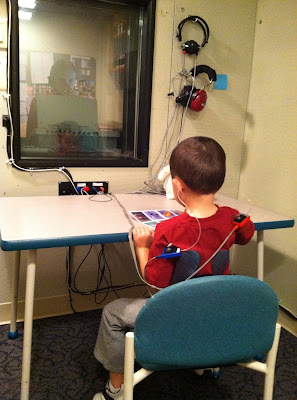 As a bonus, before we left we got to visit with two of our favorite people from the PICU that took care of Gavin!  One of his doctors, Dr. Viteri... and one of his nurses, Abbey.  Brian and I had a special snack in the cafeteria and he had fun on the playground before we headed back home.

This morning was Brian's first T-Ball game!  We got his uniform shirt and hat which he asked me to photograph him in.  I was happy to oblige, of course. 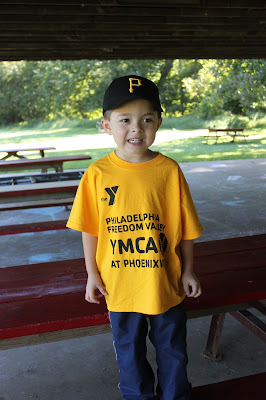 His team name is the "Pirates." 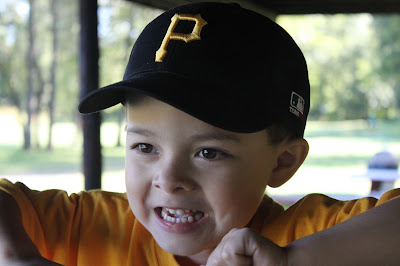 Before the game, he practiced with Ed to get warmed up. 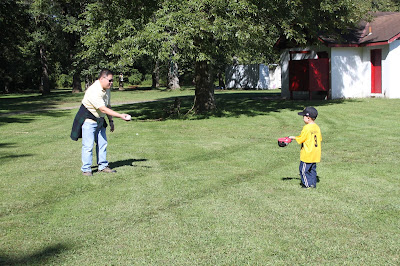 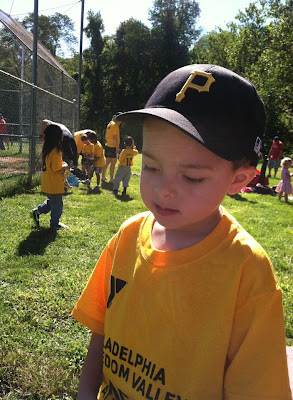 But batting was more fun and he proudly sat, my little number 3, to wait his turn. 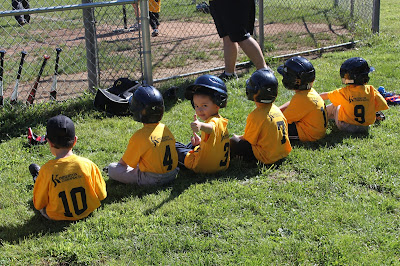 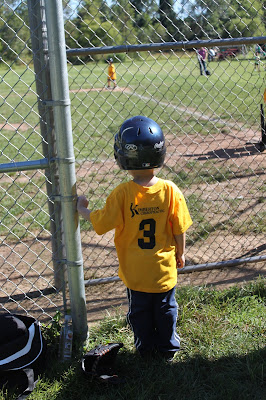 And this is how it (hilariously) went...

As Brian stood on first base, the little boy from the other team tapped Brian with his glove and said, "Nice hit." 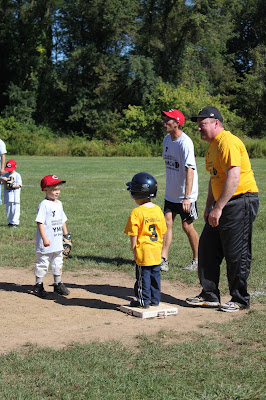 And Brian, misunderstanding, thought he said "Sit."  So he did.  Right on first base. 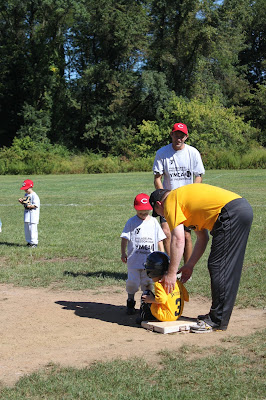 He never totally got the hang of it - but there are many more practices and many more games. 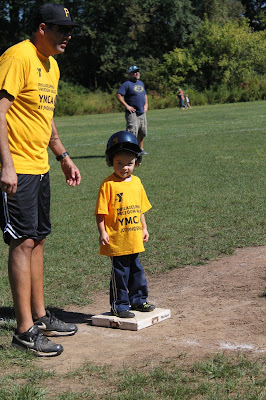 And even if he doesn't get the hang of it - the most important thing was what he told us for the rest of the day.  "That was SO. MUCH. FUN."  (Could have fooled us, but okay!)

Brian is something else - and I love reporting the sweet things that he says.  He has such a compassionate heart.  Last night in bed, as we talked about his upcoming first day of school, Brian said out of the blue...

"Gavin should be starting school on Monday with me.  It's not fair.  It's not!!  They have school in Heaven, Mama, so it's okay.  Don't worry.  But we want him here, too."

And today.  We were in the Carter's store to pick up new pants for Brian.  I saw a shirt that said "Big Brother" and showed it to him.  When I told him what it said - and that he could wear a big brother shirt now because of Hope - he said... very dramatically...

Then he hugged me and whispered in my ear...

And he gently kissed my cheek.

There might be some people that would view me as a very unlucky woman.  I promise you that is so far from the truth.

Posted by Kate from Chasing Rainbows at 8:01 PM