Yesterday would have been an exciting day - Gavin's first day of Kindergarten.

Instead, I chose to spend the day at the hospital... the same hospital where he died.

Brian and I got there in the morning and paid a visit to the Family Resource Center first.  This is a wonderful room in the hospital for families to relax, use computers, do laundry, have a snack or a free coffee or tea and even borrow books from their library.  When Gavin was an infant and I lived at this hospital with him for months, we used to spend a lot of time in this room... and I did a lot of research in their library.  So our first order of business was to donate my entire collection of books that I've bought over the last five years.  Books on Cerebral Palsy, Hearing Loss, Disabilities, Therapy Techniques and more.  When I told Brian that Gavin and I used to come into this room at night so he could look up at their twinkly ceiling lights that look like stars, he insisted that we do the same thing.  So before we went anywhere else, Brian and I relaxed on the couch and did just that. 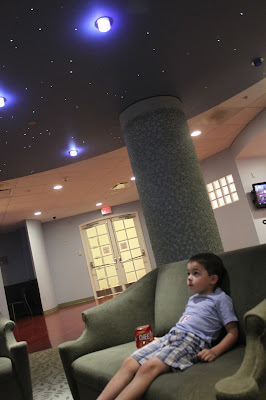 Next we visited with Jennifer, the social worker we've known since Gavin was an infant... and who helped us tremendously during his last days.  We left her with Gavin's feeding pump that we hadn't seen since he was a baby - hoping that another family could use it for their child.

Then we headed down to the Child Life Department.  Brian was excited to see Miss Jenn, who worked with him before Gavin died to give him some tools to help him process the tremendous loss.  She was so generous to offer to work with Brian while I attended my first grief counseling session.  I left him happy and in excellent hands while I found my way to a little room... steps away from the Pediatric Intensive Care Unit where Gavin died... to meet with the counselor.

You won't believe this part.  DuPont offers FREE - yes, free... as in zero dollars - bereavement counseling for a year.  You could go as an individual, a couple or a family.  I don't know how many hospitals offer this, but I find it to be a remarkable and generous gift to the families left behind.  Like us. But the reason I'm driving to that hospital for the counseling - which is close to an hour from our home - is not because it's free.  Not by a long shot.  I'm planning to make the trip as often as possible because it's at the hospital.  "Gavin's Hospital."

That was a big topic of my first session.  That hospital.  I experienced so much with Gavin between those walls.  In the first two years of Gavin's life, it seemed like I was making that drive for various appointments once a week.  We experienced some lows - scary moments following surgeries when Gavin had a hard time coming out of anesthesia on his own... to getting his diagnosis of hearing loss... to finding out, six days before his first birthday, that he had Cerebral Palsy.  But we also experienced some very high highs - like the day he sat up, unassisted, for the very first time on the altar of the hospital chapel... or the day that his sedated hearing test inexplicably came back normal... to every single time he came home after a scare.  I was always made to feel like I was the most important part of Gavin's team while I was there.  Doctors and nurses and therapists listened to me with an intensity - as they do all parents - like I was the real expert.  When you are a special needs parent - and so many things are truly out of your control - you need that.  You need the affirmation, the encouragement, the confidence from those moments.  Whenever I was there with Gavin, I felt like the best Mom.

Like many chapters after Gavin's sudden death, the "trips to the hospital" chapter of my life was slammed shut.  I feel a need to be there - and it's so hard to explain why.  I think other parents who are in my position will get it... but many won't.  I'm happy to have a reason to go back there - even if it's just for a little while.

I also spoke to the counselor about my on and off struggle with the unknown.  The unknown diagnosis. The inconclusive autopsy.  How I often replay that awful day on April 10th and wonder if I missed something.  I had to have missed something.

The reality is... there's nothing that he can say that will make this better.  And I don't mean any disrespect to him.  There's no one that can say anything to magically make my feelings stop.  That will come with time.  I know logically that Gavin died... that I couldn't have prevented it... that no one did anything wrong... that needing to come back to the hospital is ok and maybe even normal... logically, I know all these things.  But for me, having a place to safely dump all of these feelings - especially at Gavin's hospital where they "get it" and understand the life we led - is key.  Sure, I can pour out my feelings here in front of my computer - and, as you know, I rarely hold back.  But believe it or not, there may be things in my dumping session that I won't share outside of his office.  GASP!  I know... even I find that hard to believe as a confessed "over-sharer."

After my session, I went to collect Brian and found him happy and content doing craft projects with Miss Jenn. 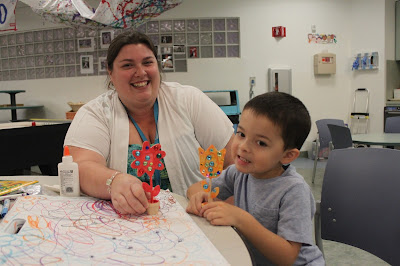 She told me that she thinks he's right on track with how he's been handling Gavin's death, developmentally, which comforted me.  And both of them showed me a picture that Brian drew of our family. 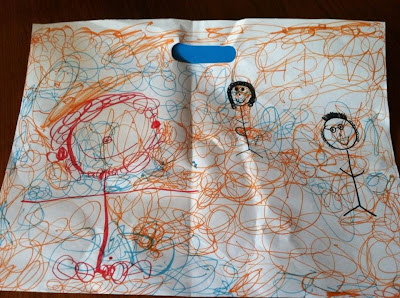 Daddy is wearing the glasses... 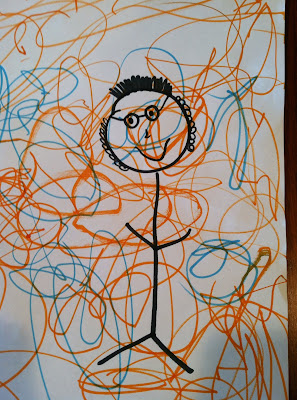 Mommy has the belly with Hope in it... 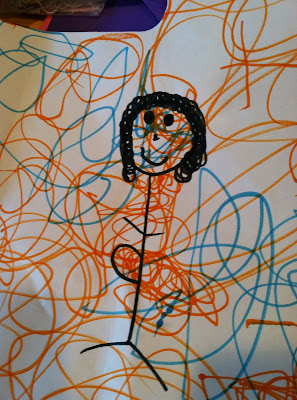 Brian is on the left... and the floating head above Brian is Gavin. 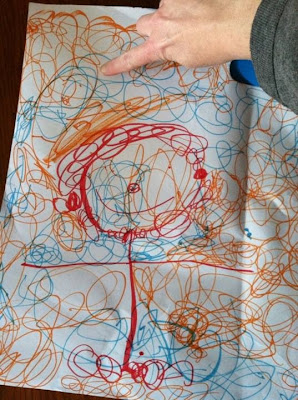 After we hugged Miss Jenn goodbye, we walked down the hall towards the elevator and ran into Miss Stephanie... Gavin's former Occupational Therapist!! 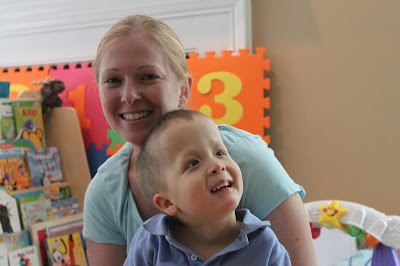 And, while in the wheelchair clinic dropping off donations, we were able to hug Miss Denise who always handled Gavin's wheelchair adjustments.  The last time we saw Denise was the day before Gavin's ER visit on April 10th.  The two of us donated my Dad's wheelchair to the clinic. 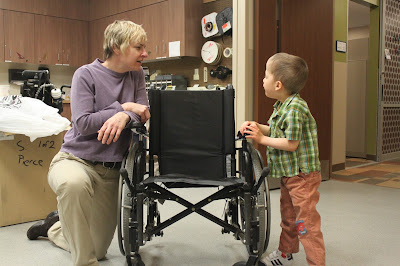 Brian and I had a lunch date in the cafeteria... bought a toy in the gift shop... and even paid a visit to the PICU to say hello to any of the doctors and nurses that were there.  We stopped in the chapel where Brian asked me to take his picture... 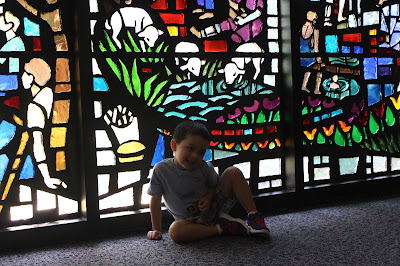 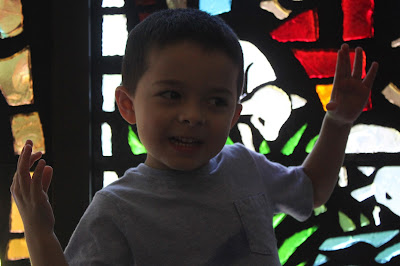 and we played for a long time on the hospital playground before heading home. 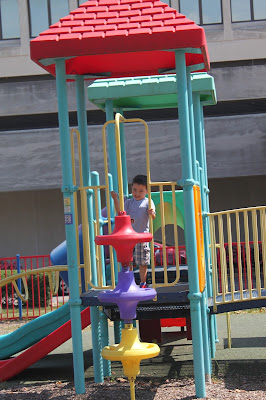 Brian declared on the ride home... "This was the best day ever." 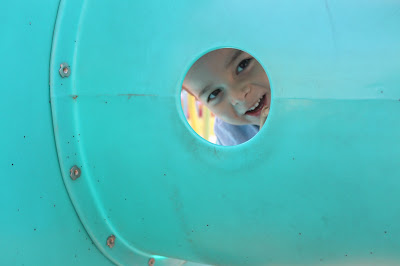 We really spent the entire day there.  And it was the best idea I've had in a long time.  It kept my mind (temporarily) off of the "First Day of Kindergarten" blues.

But I was just holding it in.  I found that out the hard way when I got home and felt mentally, physically and emotionally exhausted.  We ordered pizzas and I went to bed early.

Posted by Kate from Chasing Rainbows at 6:49 PM