Gavin and I had a fascinating experience this morning!  We met with a practitioner at Dr. Trish's office so she could do Computerized Regulation Thermography on Gavin.  This non-invasive test was something we wanted to do in order to find out if Gavin was affected by mercury and heavy metals.  We found that out and so much more.  If you want to understand what this test is and what it can be used for - click HERE.

We settled into Dr. Trish's meditation room and there we met Judy Roberson who would be administering the test.  We exchanged stories about our histories and found that we had a lot in common!  It really is a small, small world - and people truly are placed in your path for a reason.  I learn this lesson every day. 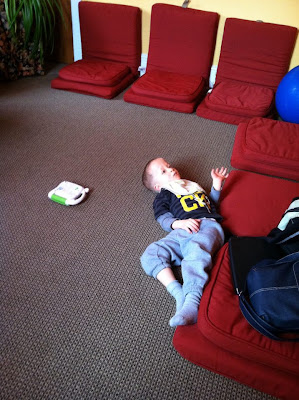 The test itself took about an hour and a half.  Judy places an infrared probe at different points of the body to test temperature. 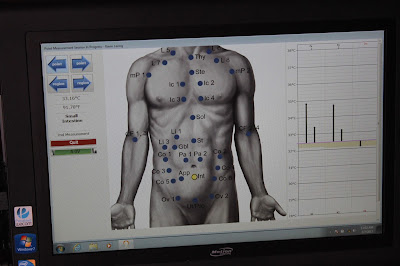 Gavin, as usual, was very sweet and compliant.  First she tests the points with his clothes on.  After that portion is over, we stripped him down to his diaper and he had to stand (pretty still) for six minutes.  Don't you know - he did it!!  I wasn't expecting that part to go well, but I guess I shouldn't have been surprised.  Gavin has always been instinctively cooperative when we're doing something to try to help him. 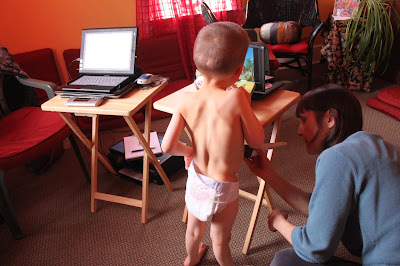 I explained to Judy my hunch about a certain thing - that there's something going on in his mouth.  Gavin has been banging his teeth for several years.  He also had a long history of constant grinding, which has slowed down this year - thank God.  And, he is very defensive around his mouth - especially on the left side.  I just felt like something was up.  His dentist has told me that his teeth look fine, but I'm skeptical.  Sure enough - the test came back showing that Gavin has severe TMJ. 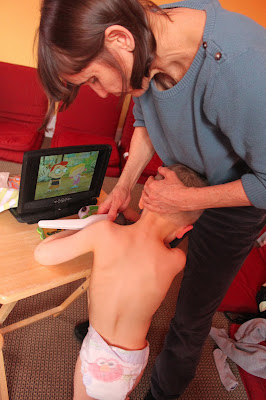 Here are the final results of the markers that came up following the CRT testing:

The food intolerance and Dysbiosis showed up as severe.  I found this interesting explanation of Dysbiosis:

When your gut is dysbiotic, this means that the “bad germs” (disease causing bacteria, for instance) begin to edge out the “good germs.”  When the bad germs edge out the good germs, basic biological functions (such as digestion) begin to breakdown, and symptoms (like diarrhea or constipation) begin to appear.   Not all symptoms of gut dysbiosis are obvious.  Because gut dysbiosis can lead to any number of physiological problems throughout the body, it can be responsible for symptoms as varied as depression and asthmatic wheezing.
When a body is unable to effectively combat the bad germs in the gut (or elsewhere in the body) a state of immune dysregulation can occur. Thus, immune dysregulation and gut dysbiosis often occur simultaneously, and each can occur as a result of the other. Additionally, gut dysbiosis and immune dysregulation can both lead to mitochondrial dysfunction, a condition where the body’s energy production is affected on a cellular level.  Gut dysbiosis can therefore result in symptoms associated with mitochondrial dysfunction such as fatigue, low muscle tone, failure to thrive, motor delays and other complex health problems.
Perhaps this is why some of Gavin's labs showed possible red flags for mitochondrial disease!  His geneticist doesn't believe that he does, indeed, have mitochondrial disease - but maybe this dysbiosis in his gut is mimicking mito.  It's something to delve into.  I am going to be adding digestive enzymes to his regimen - and maybe consulting a nutritionist for help with an elimination diet to see if that helps him.  Judy explained to me that sometimes gut problems lead to teeth grinding.  Maybe simple changes in his diet can relieve his TMJ issues.
The Brain toxicity/solvents/pesticides/metals showed up as moderate - which wasn't surprising.  But the true test, which we haven't done yet, is through urine.  Judy will instantly be able to tell me Gavin's mercury and heavy metal load through his urine.  Collecting it from him will be my challenge over the next week.  Wish me luck on that one.  Hopefully I can get him to sit on a little potty seat long enough to catch it.
The Hypothyroid was a surprise to both of us.  That's something that I'll have to get checked with a blood test at some point.  We weren't sure what to make of that.  The whole point of these tests, besides checking for mercury and heavy metal toxicity, is that it gives you a guide to bring to your own doctor.  It can point out things before they become disease - which is amazing.  I don't recall what the "side alert" means at the moment - I'll get back to you on that one.
I'm sad - but excited about the results.  I don't mind the extra work that will come from these results - the dietary changes and all - but I just feel sad that Gavin has so much going on inside that we didn't know about.  I hate to think the diet that I think is amazing might actually be hindering him.  But I'm so excited that I found out about this testing and it gave me the information I need to start helping him now.  I'm pumped for the possible changes and progress that may come from all of this!!

Posted by Kate from Chasing Rainbows at 7:36 PM