We've had a tough time since we came home from our trip to DC with Gavin!  The three of us came home with colds.  Gavin and Ed had it the worst and Brian was barely sick at all.  Just when I thought everyone was better - this past Thursday I was hit hard!  Next it was Brian.  And then Ed again.  This time, believe it or not, Gavin is doing the best out of all of us.

We've been just hanging out most of the weekend doing nothing.  Brian's been feeling a lot like this... 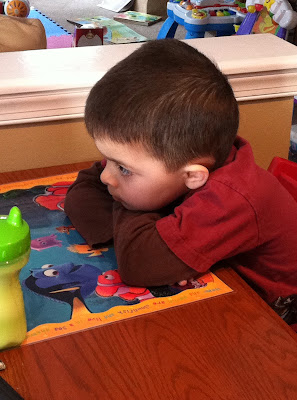 Today he started complaining that his "mouth" hurt.  And then his head hurt.  And then he stopped what he was doing and said "OW!!" with his hands over his ears.  This can't be good.  I knew at that point I'd be calling him out of school tomorrow and taking him to the doctor.  But then I grabbed the flashlight and looked in his throat.  White spots.  That sealed the deal.  I'm guessing the doctor is going to tell me Brian has strep throat (which we've gone five years without hearing!) and an ear infection or two (which Brian has never had).  I'm bummed to be breaking our streak.  Poor kid.

Lucky for us, he's been happy!  This morning while I was busy with Gavin, he sat with Ed and made snowflakes with scissors. 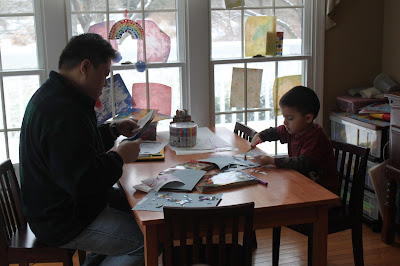 And all weekend he has been proclaiming it's "STICKER PARTY TIME" with a loud voice.  All day and night each one of our shirts looked like this... on the front AND back. 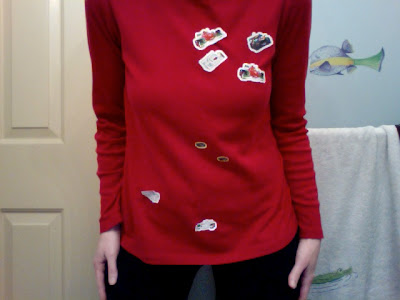 For the next week or so, I'll be checking every article of clothing for stickers before I put them in the washer!

Even though Gavin definitely doesn't appear as sick as Brian, I'm still a little concerned about him.  I can't look into his throat (he won't let us) - and he still has a horrible cough that has him on the nebulizer.  I will be bringing him to the doctor tomorrow, too, so he can check his ears and throat - and tell me how much longer he'll need the nebulizer.  He's taking Pulmocort and I don't want him on it any longer than he has to be.  Also, last time he was in to see the doctor he had a great big, hard ball of wax in his right ear.  The doctor traumatized Gavin trying to dig it out - so he gave up.  He told me to put Hydrogen Peroxide in his ear each night for a week.  I literally pour it into his ear and it bubbles up.  Gavin HATES it.  I'm hoping tomorrow when he looks, the wax will have broken up and disintegrated from these peroxide treatments.

Other than that, our resident superhero has been having a GREAT weekend!  He's been walking around getting used to his new shoes and getting into all kinds of mischief.  This morning, he was in the kitchen and I walked into the playroom and left him for a couple minutes.  He saw his cup of water in the middle of the kitchen table and decided to take matters into his own hands to get to it.  He climbed onto the kitchen chair, kneeled up to reach his water and then sat himself down to drink it!!  I couldn't believe it. 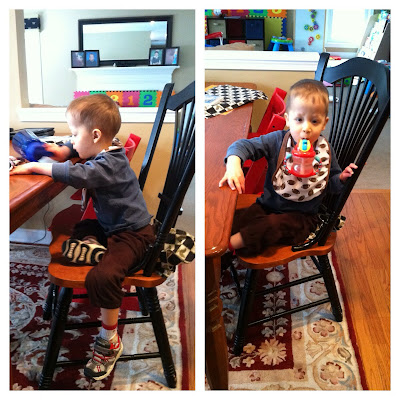 He was pretty darn proud.

Every day I have to get used to something new.  I love it.

Posted by Kate from Chasing Rainbows at 4:59 PM