How to Handle the Stares...


This weekend I'm re-running some of my favorite posts to give new readers an idea of who we are...how we think...and how we love around here.  This one struck a nerve when I posted it back in May.  Everyone handles the stares differently, and this is my take on the situation...

That's what I've decided to call them.  You know, the people who stare at Gavin when we're out in public.  Because let's face it - they're stargazing if they're admiring his movie-star good looks.  Am I right? 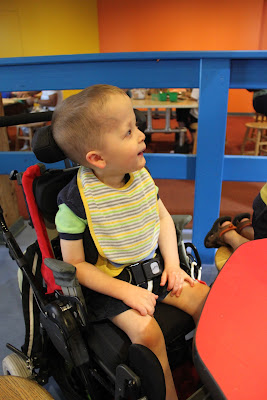 In my travels, I've met (and "cyber-met") plenty of people who get very irritated at Stargazers.  They come up with sarcastic comments - or shoot them nasty looks - or sweetly engage them in conversation.  I don't really do any of that and I'd like to tell you why.

Staring is human nature.  I've been guilty of staring and haven't even realized it!  Just last week when Gavin and I were at the hospital to get his wheelchair adjusted I stared at a family.  They were a Chinese couple - there with their young son who looked like he was recovering from severe burns all over his body.  I stared at them for probably ten seconds.  If they had looked up and saw me, they might have thought I was staring at his burns.  They could have been annoyed and said something nasty to me.  Why was I staring?  I was thinking, "How nice that the Dad came along for his son's doctor visit." because I know how much I like it when Ed comes along every once in a while.  That was it!  No malice.  No ill intent.  No negativity at all.

I've found myself staring at families with a young infant at the hospital.  I always hope that if they look up and see me looking that they can read my eyes.  My eyes would be saying "Hang in there.  It gets better.  Right now you feel like you're at the bottom of the well looking up into the dark night.  But your fears of what life is going to be like will not be your reality.  Soon you'll see that this child that needs your help will be the one that helps you...the one that changes you for the better." 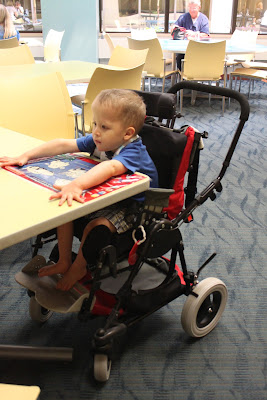 My point is - you never know why someone is staring.  It could be for reasons you'd never expect.  So letting yourself get irritated or offended or mad or sad about it is wasting precious energy...and allowing negative energy into your life.  And that's never good!

I want to raise Gavin and Brian to always assume the good in people.  I don't want them to get emotional about people who stare.  Even if the people are rude.  There will always be rude people in the world - but there's no reason that they should be rude in return.  I want them to assume, like I do, that anyone who is looking at them has to be admiring them!  Why not?  It's a much nicer way to think.

And if people are staring simply because Gavin's "different" - well, it happens.  Gavin is different and there's no changing that fact.  I just think it's totally human nature to look and I don't judge people who do.  Not everyone was raised with the "subtlety" gene.  Me, included.

That's what's on my mind today.

Posted by Kate from Chasing Rainbows at 5:00 PM