I have spent much of this morning doing the following things...

Cleaning up cold tea (thank God) after Gavin crawled from his chair onto the kitchen table to grab it and push it over.

Picking things up off the floor after Gavin pulled down anything within reach on the kitchen counter.

Watching Ed clean up a big cup of water that, you guessed it, Gavin knocked over even though we thought it was out of reach.

Telling Gavin 227 1/2 times (I was interrupted mid-way by the phone, lucky for him) to stop shaking his milk cup and spraying milk everywhere.

Getting Gavin down from balancing precariously on top of his toys to reach the TV.

Frustrating things that I'm sure many of you have experienced.  Most little kids go through a stage where they get into everything.  But for me, these things are really great problems to have.  Problems I never thought I'd have!  Lately Gavin is definitely keeping us on our toes.

Through all of the mayhem, Ed and I put together Gavin's travel tent bed to get ready for our road trip! 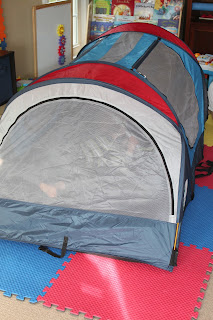 Early Tuesday morning, Ed and I are bringing him to Children's National Medical Center in Washington DC to see Dr. Carsten Bonnemann.  We are driving down tomorrow and were lucky enough to snag what was probably the last remaining hotel room in town.  Our appointment coincides with the presidential inauguration!!  It's sure to be very, very busy - and very, very congested - which is why we are glad to be staying overnight. 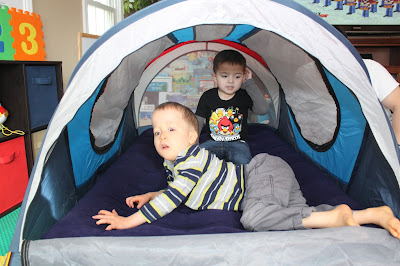 This will be Gavin's first time sleeping in his Nickel Tent Bed!  We bought a twin air mattress for him to sleep on inside. 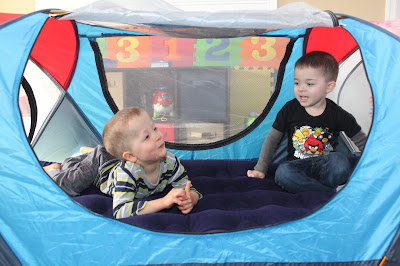 The zip-up feature is key if ANYONE is going to get any sleep. 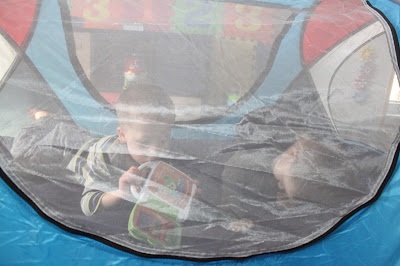 I've done a lot to prepare for our visit on Tuesday and I'm anxious as can be.  I want to make sure I make the most of our time with Dr. Bonnemann.  Lots of people would like to be in front of him, so I feel very lucky.  This morning I decided to write up a timeline of Gavin's developmental milestones and I found myself getting lost in the past...and choking up quite a bit.  I watched each of his birthday videos - which get me every time.

The first year was so tough.  So much of that year was spent in the hospital or back and forth to see doctors or dealing with feeding tubes and hearing aids.
Make a video - it's fun, easy and free!
www.onetruemedia.com

The year before he turned two was when he used a sippy cup for the first time - actually that happened while I was in the hospital delivering Brian!  He was two years and seven months when he sat unassisted for the very first time.  Miss Kara, our first wonderful helper, was there to witness and we both burst into tears.  It happened after a doctor appointment at the hospital.  We stopped in the DuPont chapel on the way out and he sat on the altar all by himself as I snapped away with the camera.  When he was twenty months, also with Kara as a witness, he army crawled for the first time!  And he finally crawled on all fours at twenty two months...and never stopped.
Make a video - it's fun, easy and free!
www.onetruemedia.com

When he was two and a half, he started with Dr. Trish and his progress was rapid fire that year.  He started standing... cruising the coffee table... taking steps with a walker... and his tone improved tremendously.  That was the year he did Hippotherapy on a horse named Chloe as well!
This "Gavin is Three" movie probably makes me the most emotional...
Make a video - it's fun, easy and free!
www.onetruemedia.com

Those early years were wild.  The highs were so high.  The lows were devastatingly low.  But every little moment - and every tiny forward step - brought Gavin to this day.  He is doing so well.

I don't know what will come of this appointment.  Dr. Bonnemann will first perform a muscle ultrasound.  The testing that would really help him with a potential diagnosis would require sedation... which we all know Gavin doesn't do well with.  Starting with a muscle ultrasound is much less invasive.  I expect so much from this appointment - but at the same time I expect that I'll walk away with the same knowledge I had going in.

But whatever we learn...it will all be okay.  It always has been for the last five years!  I won't be writing tomorrow as we'll really just be on the road and possibly sitting for hours in inauguration traffic.  I'm sure I'll be on Facebook and Twitter with updates here and there so feel free to find me at either of those places!

And please keep the three of us in your thoughts - and maybe say a little prayer.

Posted by Chasing Rainbows at 3:00 PM