A month or so ago, my friend Ellen asked me to contribute to a piece she was asked to write about the holidays - and how to make them happier for special needs kids.  Ellen blogs about her son, Max, over at Love That Max - and is one of the best writers I know. So after I turned around to see who was behind me and thought "Me?  Really?  You want ME to contribute to YOUR article?"  I said YES and was super-duper flattered.  I was happy to write about how I quickly realized that Christmas morning was less about ME and my visions... and more about Gavin and his.   You can read the piece, which also includes several other wonderful bloggers and special needs Moms,  by clicking HERE.

I love Christmas.  If Christmas fell in the Spring, I'd love it even more.  But I don't hold the cold, cold weather against Christmas - I really don't.  One of my favorite parts of the holiday is getting photo cards from our friends and families.  Each card we get is more beautiful than the last - and it's SO much fun to see how the families grow and change.

I have our collection of Christmas cards on the side of our refrigerator year round.  Sometimes I randomly grab them and look through them - amazed at how WE have changed!  I thought I'd share all of them with you (except this year's which will show up here on Christmas day!) - from our first card before kids to last year's card just after my Dad died.

Oh, and one last thing before the photo parade.

A little while ago I was in the playroom with the boys trying on new clothes I had picked up for them.  The last thing I tried on Gavin was the Superman shirt he was given yesterday by Miss Sara.  I stood him up to pull the shirt down and see how it looked... and he walked away from me.  He walked clear across the playroom by himself.  I started cheering - Brian started cheering - and when Gavin dropped to the floor, he turned around to look at us with the biggest smile.  It was just the three of us, so I have no video proof!!  But something tells me this is going to be our new normal.  What a wonderful Christmas this is turning out to be.  And hopefully a glimpse into a happy, healthy, positive 2013 for our family.  Hey - it can't get worse, right?  It's only forward and UP from here!!

2006 - we practiced parenting with our little dog, Lucy, and a foster dog named Bailey.  Bailey was just like the dog, Marley from "Marley and Me" - crazy.  He was afraid of hardwood, so we had runners all through the first floor.  He was also afraid of storms and ended up tripping me on the stairs while I was pregnant with Gavin.  It was an awful fall.  That was the end of Bailey.  We found a new home for him where he got lots of individual attention. 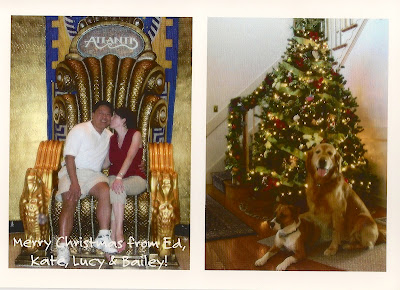 2007 - This was the year Santa brought us a son!  The photo with Santa was our first outing with him after a month in the NICU and before he got sick.  He was so tiny that Santa was afraid to hold him!  That's one of my favorite pictures ever. 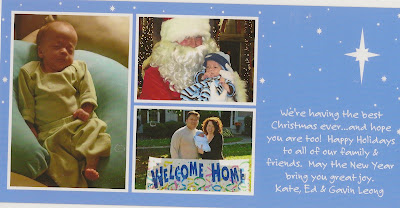 2008 - I am very pregnant with Brian in that picture!  We were so excited to tell Gavin he was going to be a big brother when he was only six months old.  As you can see, he jumped on the research so he could be the best big brother ever.  And, as you know, he is.  Since I was due close to Christmas, I sent out these cards early - Brian was born December 16th of that year! 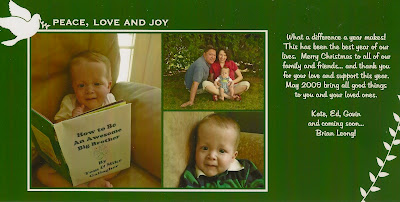 2009 - We had such a fun first year with Brian!!  We also had a great year with Sarah Racine, who helped us with the boys.  She took all three of these photos for me!  Ed happened to be dressed up for a meeting one day and before I let him leave the house I ran upstairs and threw that dress on.  If you saw the black socks I was wearing, you'd laugh as hard as Sarah and I did that day. 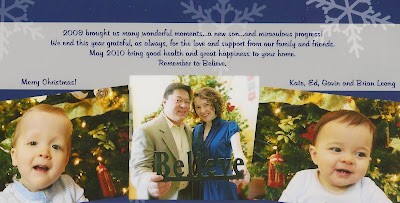 This card, from 2010, involved Sarah, too!  It was such a HUGE moment to see Gavin sitting by himself on that step.  She was hiding on the side - just in case he tipped.  But he never did!!  This was also the year we lost Darcy.  I was so grateful for the outpouring of love and support we received during that time.  Truly. 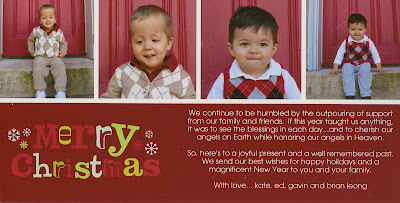 2011 - Our first professional family portrait!  My friend, Julie, came over not long after my Father died to take these.  I was so thankful.  The big news last year was that Gavin was standing! 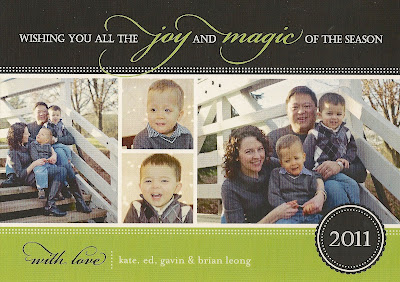 On the back of the card I showed that off - and incorporated my Dad with his favorite saying, "Keep the Faith." 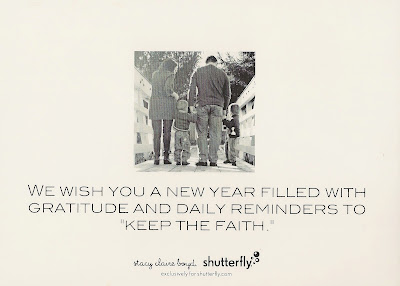 Posted by Chasing Rainbows at 4:24 PM