On this day last year, 11/11/11, my Dad was laid to rest.  Ironically, it was Veteran's Day - a most fitting day to pay respects to this retired Navy Captain.  I wrote a personal eulogy, which I only shared here.

On this day this year, everyone in our family received an email from my niece, Julia.  Julia is an extraordinary woman - and my Dad loved her dearly.  Actually, they have a lot in common.  (Like their writing talent!!)  She just started her first year at Tulane University in New Orleans and we're all so proud of her. 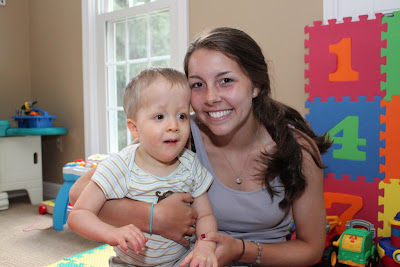 But this email.  It rendered me speechless.  Yes, me.  The email was so beautiful that, with her permission, I have to share it with the world.

In the spring of senior year we received an assignment in my government class to write an eight-page paper on the United States president that we picked out of a hat.  My luck is normally slim in randomly choosing things, so I had low hopes for picking a president that could inspire eight pages from me.  Even though I didn’t know much about him at the moment that I unfolded my little square of paper, I was pleased to have chosen our 39th president Jimmy Carter, simply because he was fairly modern.  By the end of the paper I found myself referring to Mr. Carter as my man Jimmy.  Many of the documents I read seemed to indicate that President Carter had a weak legacy, and maybe I still am just too young and full of idealism, but I felt that Jimmy Carter had strong and admirable intentions in all of his actions even if they didn’t always produce positive results.  Carter’s attitude and spirit is what stuck out to me, I was able to see past the failed attempts at rescuing the Iranian hostages or earning another term and admire his intentions.  I believe that is the legacy our president of the Gallagher family, Pop, left after his term too.  There is no doubt that his actions are honored and remembered but in the past year I am sure what we have held with us is a positive spirit, a self challenge of overcoming adversity, a quiet whisper of ‘keep the faith’ in a tough moment.

In thinking back, Pop and I probably talked about Jimmy Carter before.  Especially since I volunteered with Habitat for Humanity, the Carters were strong advocates for the organization, so I’m sure I couldn’t have escaped a joke comparing myself to Rosalynn Carter.  With my new knowledge and respect for Jimmy Carter, I would love to have that conversation again, and hear what Pop’s thoughts were on Carter.  Pop stayed on my mind through writing this paper last May as I noticed several similarities between him and President Carter.  The most apparent and fundamental likeness was service in the Navy.  Another similarity was a less than glamorous childhood marked by challenges and hard work.  Finally, the crossover that excited me most was when I came across one of Jimmy Carter’s memoirs called Keeping Faith.

As we all probably have for almost everyday of the past year, I’ve thought about Pop more especially in the beginning of my college journey.  When I flew home during Hurricane Isaac I felt ‘touched by an angel’ by the passenger next to me. It was an older man just a little younger than Pop, with glasses just like Pop’s, reading a strategy book on card games, and later pulling out a kindle. Just that was enough for me to feel that Pop was ‘with me’ through this bustling hurricane evacuation as well as through my new college experience in general.  I nearly cried when we started talking and I learned that he, as well as his oldest son, was in the Navy. My beliefs of heaven and faith have only been strengthened in the wake of Pop’s death.

Once I was back on campus, it wasn’t before long that I found myself, pretending to know where I was going, in the stacks of the library searching for Jimmy Carter’s memoir.  Finally I found the dark blue, fabric bound book, with a simple, Keeping Faith Jimmy Carter, etched on the bind in gold.  I renewed it twice and tried to get through as much as I could, but it turns out diligent leisure reading is not genetic.  From what I did read, I reflect.  Keeping faith involves risk.  Maybe this in an attribute learned in the armed services, that Jimmy and Pop both had it alike, but I think risk and faith come together for courage in action.  Another theme I came across in Keeping Faith was Jimmy Carter’s reflections on being sure that he and our nation were practicing what we were preaching to other nations.  This lesson is found in the Bible and from those of strong morals and values that we cannot criticize others for something we ourselves are committing.  Finally a large portion of the memoir was about human rights.  This was a great reminder to me of the connection between my faith, what that means to me, and the commitment to upholding the rights of all people. The two are interlinked and cannot be extracted from one another.

Keeping faith molds itself to each situation, joy or struggle, in my life.  Sometimes it means hope, sometimes it means remembering the beliefs of the actual faith or religion I practice, and in the past year sometimes it just means ‘hey pop!’  Faith has challenged and confused me, but I will always keep it close.

Posted by Kate from Chasing Rainbows at 6:11 PM