Gavin and I spent much of yesterday together - just the two of us.  It was a trip to the hospital to visit his eye surgeon - but it was time together nonetheless!!

Our first visit was with Dr. Lehman, his eye surgeon.  She's been on TV and the radio doing interviews lately, so we felt pretty fancy that we had some time with her.  Gavin even asked for her autograph which cracked her up.  Dr. Lehman means a lot to us.  Last year, when Gavin came very close to losing his eye, we saw her several times a week.  For a stretch it was every day.  We'll always be grateful to her for remaining calm...and helping to save his eye. 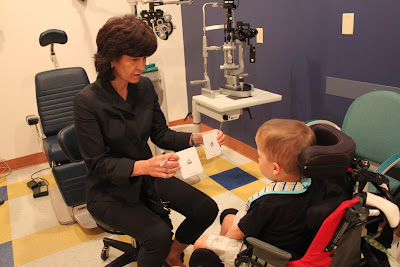 He flew through his routine check up with no problems.  His lids look great, his corneas look great and his vision still seems fine, thank God.

I always mention to her that Gavin appears cross eyed at times - this time was the 72nd time.  And she always reassures me that he's not.  If you ever see a picture of him where his eyes look a little 'wonky', it's an illusion.  His wide nasal bridge combined with the asian folds in his eyes sometime cover up a little bit of the white in his eye when you're looking from different angles.  But when she looked at the photos I showed her, she pointed out that his pupils were both right in the middle and perfectly aligned. I think the 72nd time was the charm.  What can I say...I'm a slow learner.

After our eye appointment, I thought I would sneak down to the wheelchair clinic.  It's not always easy to get seen there - sometimes you have to wait a long time for an appointment.  I had one for this coming Tuesday, but that would mean taking Gavin out of school.  And his recent 'scootching' in his seat while he is buckled in had some people nervous about his safety.  So I took a chance and pleaded my case...and boy, did we get lucky.

Not only did they fit us in right away, but they listened to all of my concerns about Gavin's current chair.  We left a couple hours later having ordered a whole new set of rock star wheels for him!!  This is what the chair looks like, but it will not be the bright green color. 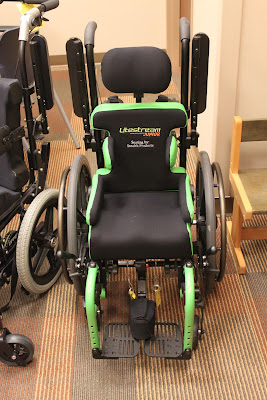 I ordered the color called "Rainforest Green" because - now, don't laugh - it continues the "Rainforest" theme that was in his baby nursery.  We were all about Rainforest everything since Ed and I met in Puerto Rico and love going to the rainforest there.  I know.  I'm a sap.

The chair will have his name embroidered on the back of the seat, which I'm so psyched about!  And it also has wheels that are close to the front so Gavin can learn to self propel.  We had him attempt it in the hospital and he shocked everyone by propelling himself across the room!!  There's only one downside.  Maybe two.  One of my complaints about the current chair he has is that it's heavy.  And it gets hard for me (really hard on certain days!) to lift it in and out of the back.  His current chair is actually a stroller...but this new chair is a wheelchair.  Once you get into "wheelchair country" - they get heavier.  I am not interested in getting a "wheelchair conversion van" because I don't believe that Gavin will need it.  But a ramp - now that would be nice.

The other bummer is that now that we're asking for a new wheelchair, it's probably unlikely that insurance will pay for that 'adaptive stroller' I want.  I have my heart set on two now - the Special Tomato EIO push chair and the Convaid Rodeo.  Both of them will fold up and fit in the trunk and are MUCH lighter for me.  This is a long shot, but if there's anyone out there looking to get rid of theirs or sell it, please contact me!!

Last night, Ed took all of us out on a date to a local Carnival!  It was so much fun.  Brian won some amazing (amazingly cheap and ugly, let's be honest) prizes by throwing darts at balloons...and we went on lots of rides. 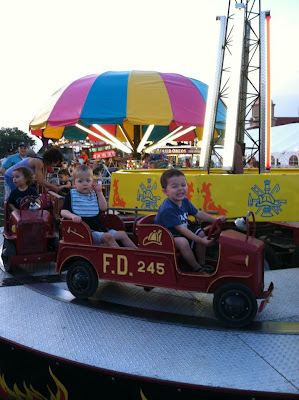 The boys went on a Caterpillar Rollercoaster... 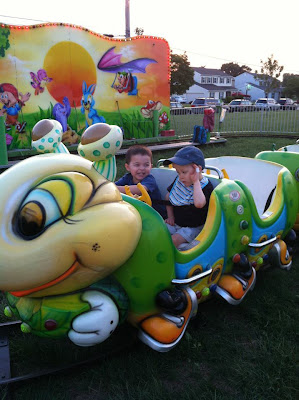 Then the fire trucks that, truly, was the FASTEST child's fire truck ride I've ever seen.  I was holding my breath the whole time...

And, the best part of the night, the GIANT SLIDE!  Brian and I climbed up first.  Towards the top I started to think, "Wow, this is an interesting time to suddenly become terrified of heights."  But the climb was worth it when we got to the bottom and Brian felt like such a big shot.

I wasn't brave enough to carry Gavin up those stairs, so Ed did and Gavin LOVED every second of it...

I think the best part of the night, for me, was the very little support Gavin had while on the rides.  I brought the rug gripper, but that was it.  The only thing holding him in was the little strap that they use for every kid.  I had the chest strap my Mom made that I bring everywhere - but it wasn't going to work on these rides.  So I took a chance - and he did it!!  It was a really big deal!  Especially on those "Formula One" Fire Trucks!!

We decided that the best way to celebrate Gavin's upcoming FIFTH birthday at the end of the month is to go back to Ocean City, New Jersey - his favorite place in the world.  I found out the boardwalk rides will still be open!  I can't think of a better present for him.  And us.  It always makes us so happy to see him so happy. 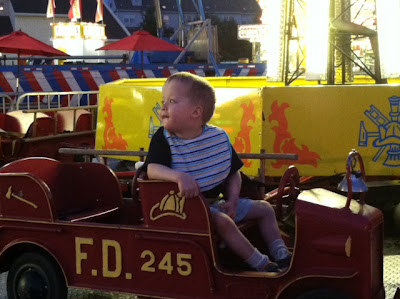 Posted by Kate from Chasing Rainbows at 2:53 PM