What to Get a Superhero That Has Everything!...

Every time there is a need (or a want!) to buy a gift for Gavin - I panic.  Sounds silly, doesn't it?  I mean, he's my little boy.  And if anyone knows him the best, it's likely me.  But if you know him in real life, you also know...this little boy has everything.  I mean everything.

I'm in a little bit of a panic now.  His birthday is Saturday! 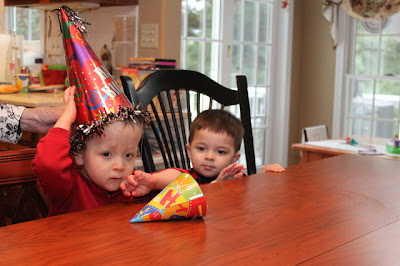 Gavin is pretty persnickety about toys.  He really favors toys that play music, light up, and/or spin.  All three would be the trifecta - the perfect toy.  And I'm pretty sure I have (or have had) every one of them over the last four years, 11 months and 24 days.  Trust me.  If I looked at a "What to buy a 5 year old" guide - it would not fit Gavin one bit.

I just worked that all out as I typed tonight!  How about that!!

But.... I still need more.  I don't like getting Gavin toys that are really "hidden therapy" for him.  He loves to mindlessly spin and look at flashing lights and listen to things play music when he hits a button.  At school, he loves a toy called "Spin the Beetle" made by Hasbro.  It's not sold in stores anymore...and I've had no luck finding it anywhere online.  I did find one person selling it on Craig's List - in Aurora, Colorado!  I'm hoping to hear back from them that they'd be willing to ship it.  This is what it looks like... 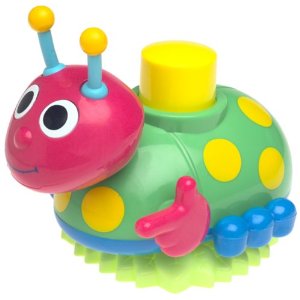 A friend, who was a special ed teacher, told me I may not want to get this for Gavin.  That if he loves it so much at school, we may want to keep it dedicated for school only.  They always need good motivators and if he wears this toy out at home and at school - it will lose it's effectiveness.  But here's the deal about Gavin - when he loves a toy, he loves it for life.  Like his toy piano.  This was a shower gift from my cousins and he's been playing with it since he was six months old.  Still a huge favorite. 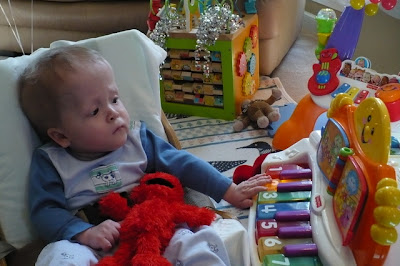 And his monkey toy... 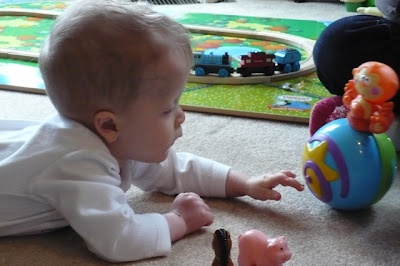 I remember this moment like it was yesterday.  That monkey thing was the first toy he intentionally reached for when it rolled away.  It was a big deal.

And who could forget this moment - when he pulled himself up to a kneel for the very first time to play with his activity table.  He LOVES his activity table.  It would be a no brainer to get him a new one, but I've done that and he's pretty particular about the tables.  His current two have only been replaced with identical ones when they are drooled on one too many times to the point of no return.

Remember this??
So... I am offering a five million dollar prize** to the person who suggests the coolest new toy for Gavin. He pretty much has everything Leapfrog...everything Laugh and Learn (which he LOVES for the lady's voice!)...and he doesn't care for the Vtech toys because of the voices.

Keep in mind - we have less than five days to create the greatest birthday ever for our Superhero.  So, chop chop, people.  *wink*

In other news, Brian's behavior continues to wow me.  There have been just a handful (maybe three) little incidents of whining or complaining - but that's nothing.

He has spontaneously done things without me asking him to...he has said please and thank you and "you look pretty today, Mama!"...he ran into Gavin's room yesterday morning and said, "Good morning, Gavin.  How are you doing today?  It's a nice day to play with you!"...he's just been all around pleasant.  This afternoon when he got home from school, we played on the playground out back.  We were on our pirate ship and had to save our ship from cows.  (Don't ask me.)  We had so much fun. 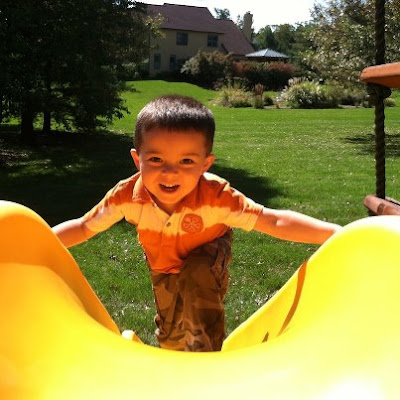 **About that five million dollar prize.  Umm...yeah.  Maybe a slight exaggeration?  Either that or a total lie.  I'll let you know AFTER you present me with brilliant birthday present ideas.  There could be a bonus if you handle Christmas, too.

Posted by Kate from Chasing Rainbows at 7:55 PM