Getting Into The Swing of School...

Yesterday we had a surprise visitor while we were waiting for the bus at the end of our driveway.  It was Cheryl, the Safety Coordinator from the bus company!  She came out to meet the bus and make sure that Bruce and Marie were locking Gavin's chair in efficiently.  I was so impressed by that.  Everyone at this bus company has been so sensitive and careful with Gavin.  And they've gone above and beyond to make me feel comfortable.  Cheryl hung out with us for a while as we waited for the bus to come and it was nice to get to know her a little bit.  It's funny how perfect strangers can find something in common with you in a short chat! 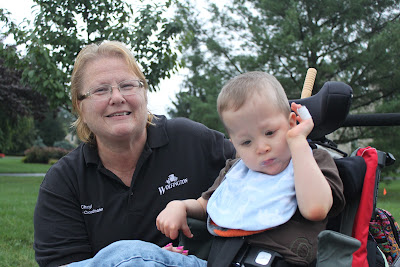 We're getting into the flow of our new morning routine.  I thought waking the boys a whole hour earlier (at 7am) would be hard, but turns out it's only hard for me.  *Yawn*  A few times I've had to wake Brian and deal with grumpiness for a little while, but other than that it hasn't been bad.  Sara now comes at 7:15 to help get Gavin fed and ready for the bus by 8:10.  They're still trying to work out the traffic patterns. The majority of the time they don't get to our house until well past 8:30.  As long as it gets worked out before the cold weather, we'll be patient! 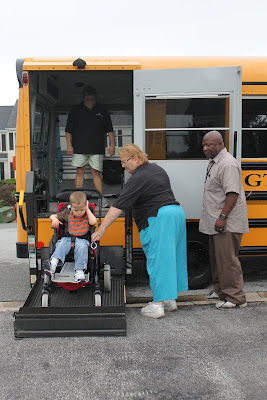 Gavin loves the bus, Sara tells me.  She sits right across the aisle from him.  The only part he sometimes doesn't like is when they are strapping him in.  Between the loud clicks and people in his personal space - he often looks a little sad through the window, as you can see. 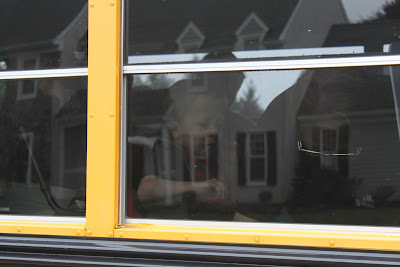 Once they are on their way, Brian and I jump in the car and I drop him off at school.  The other morning we were greeted by his teacher and a new face.  Brian had a new classmate and he was not at all happy to be there.  Practically hyperventilating!  I knelt down as I held Brian's hand and tried to talk to the poor little guy - telling him Brian would love to show him all the cool toys they had...and how fun the playground is...right, Brian?  Uh huh, he said.  Then I said (foolishly) - "Brian, do you remember your first day?"  Uh huh.  "You were scared on your first day too, right?"  NOPE!  Well, he was right.  Couldn't argue.  I looked at Miss Laura and shrugged my shoulders - I tried!!

Lately Brian has been in major question mode.  He questions everything to the point where I either have to go look things up - or make things up.  Luckily, I'm pretty good at making things up.  Like where the water goes when it goes down the drain.  Then where it goes once it's in the water pipes.  Then where the water pipes go.  Before I know it, I'm at the water treatment plant down the road!  He is so inquisitive.  My sister, who was an excellent homeschooler, gave me a great idea this morning.  She said to not be afraid to call places - like the water treatment plant - and ask for a tour!  It may be a little soon for this, age wise, but I totally plan to do this.  I've already made a list - Water treatment, the police station, fire station, recycling...it could be fun!

Gavin is still loving school.  He has met and had sessions with all of his therapists and I love getting their notes.  I really can't stand not being involved - it's not easy for me.  But I'm sure it will get better as the days and weeks go by.  Today Sara painted a hilarious picture for me about "Shaving Cream Sensory Play."  She told me that at one point Gavin had shaving cream everywhere - it looked like he was about to actually shave!  He had a ball and came home a mess.  I loaded up his iPad with all kinds of photos from home and today Sara added them to his communication app.  They plan to incorporate his iPad into many parts of his day, which excites me.  As much as I love the iPad for that - I still have a reservation with it.  My dream school for Gavin (at least at the moment!) which starts at first grade does not allow any computer equipment or electronic devices.  They use the paper "Pecs" system, if the child needs it.  Gavin isn't able, physically, to use Pecs.  And if I get him used to (and possibly proficient) using the iPad - will I screw him for a future at this school??  These are the decisions that keep me up at night.  But for now, I want him to communicate.  And I'm happy he's at school where there are lots of hands to help hold the iPad for him all day!!

I'm having a mini wheelchair crisis as well.  To get around town, I often put Gavin in our umbrella stroller.  Just a typical stroller.  Problem is - he's way too tall for it now and uses his feet as brakes.  Flinstone style.  Sometimes we use his wheelchair - but there are two problems with that.  It takes up a LOT of room in the trunk...and it's so heavy.  Sometimes it's hard for me when I'm alone to lift it in and out multiple times a day.  So I found an adaptive stroller that I fell in love with.  It's called the Special Tomato Push Chair.  I thought I had a great chance getting it covered by our insurance - but today it was denied.  Bummer.  I will appeal, of course - and probably win - but it takes time.  Everything is a fight.  The other problem is with his current wheelchair.  He is able to slip himself down in it - despite being buckled in very well.  It makes me nervous from a safety standpoint.  So we'll be headed to the wheelchair clinic at the hospital this coming Tuesday to possibly pick out a new wheelchair.  Different than the adaptive stroller - two different types of chairs.  Let's hope a new chair is covered without a hitch!!

Nothing's easy...but everything's worth it.
Posted by Kate from Chasing Rainbows at 7:46 PM