First thing this morning I called Dr. Trish's office.  As it rang, I crossed my achy fingers that she would miraculously have an opening for me.  I was thrilled when she said she could not only see me...but Gavin as well! 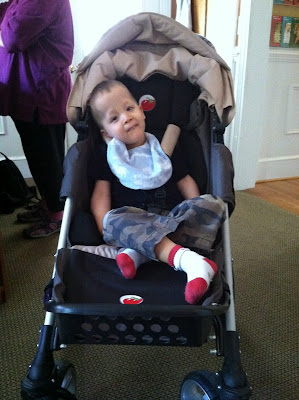 He was, as usual, so happy to see her and to be in her office.  We went into one of her private treatment rooms together.  Gavin sat in his stroller and watched a movie while I was face down on her treatment table.  She really did a long and thorough treatment on me - hoping to release all the pain, the trauma from the summer (egg donor failure, Lyme disease, giving up trying for a baby, Gavin's hospitalization, sending him to school...etc.).  And for Gavin, she concentrated on his legs and his core.  She told me she felt that he is really wanting to walk on his own.  What she didn't know is how true that is.  Gavin is starting to walk a lot holding just one of our hands.  He also easily scales the walls down the hallway - something that Miss Wendy had hoped he would do months ago.  I see big things in store in the walking department.

Dr. Trish told me that she did so much work on me that over the next few days I should expect to feel great...or like a truck hit me.  I'll let you know what happens!  Before I left, I made standing Friday morning appointments for me and Gavin.  Friday's an easy day because there's no school.  Now I just need to figure out one more day for my solo appointment - that will be tough.  But I need to get back to her so I can get back to myself.

When I got home, Brian and Miss Sara met me at the garage door to announce that Brian got TWO STARS while I was gone.  His behavior was excellent!  Woo Hoo!

But as soon as I crossed the threshold into the house...everything fell apart.  The whining started.  The crying started.  The pitching a fit started.  I asked Sara if he did that at all while I was gone.  Nope, she said.  So right then and there - I knew what I needed to do.

Brian and Mommy were going on a date.

We called Daddy at work and asked him if he'd meet us for lunch and he was thrilled!  Brian and I waited at the table with a giant Spider Man coloring book. 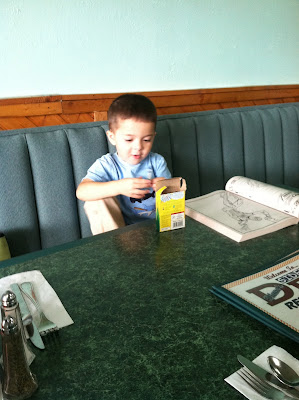 Then Daddy arrived!!  Brian beamed the entire time.  Not a single whine, complaint, tear...nothing.  We showered his little ego with compliments and praise and lots of love. 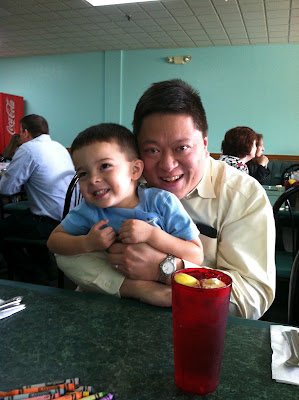 I ordered Brian a giant hot dog and it was super cool. 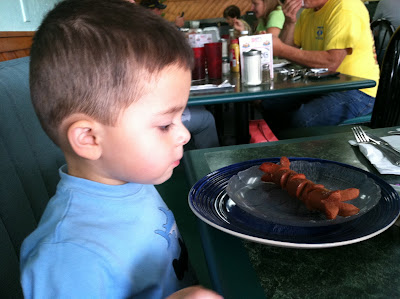 See what I mean??  It looks like a totem pole!  He devoured it. 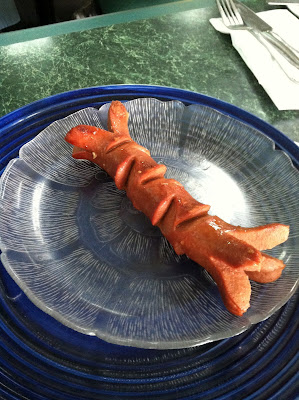 We said goodbye to Daddy and headed to our next stop.
The MOVIES!! 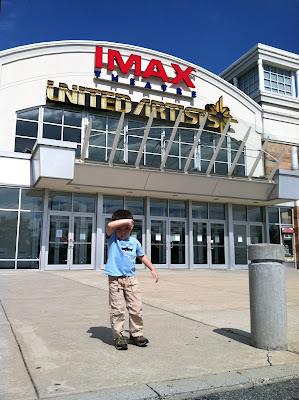 We were the only ones in the entire theater to see "Finding Nemo - 3D" - Brian's first 3D movie! 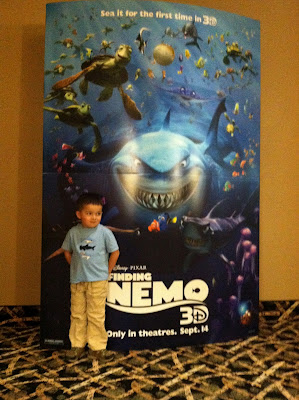 I was a little nervous he wouldn't want to keep the glasses on...or it would freak him out.  But, as you can see...he was pretty mesmerized!! 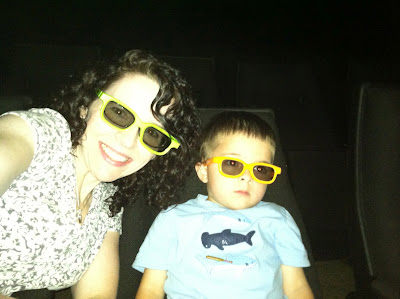 The movie was adorable and he chattered about it the entire way home.  I was feeling pretty proud of myself.  Operation "STOP THE WHINING" felt like a big success.

But I will not be deterred.  I am going to figure out how to nip this whining crap in the bud.  And I'm going to continue having one on one dates with both of my children.  If it's not doing anything for them...it certainly makes ME happy!!  And really, isn't that all that matters.  *wink*

Posted by Kate from Chasing Rainbows at 7:27 PM