Well, I guess I should have known the day would end as crazy as it started!  Where to begin...

I'll begin at the end. 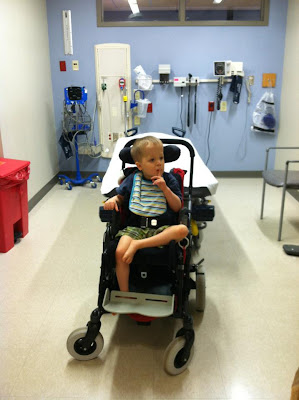 Gavin broke his pinky finger tonight.  It was a total accident.  I had just gotten him down from his high chair after eating his dinner.  He crawled towards the art table and I got distracted with Brian - no big deal as Gavin always roams around and is just fine!  But then he crawled towards the slider to look outside to the back deck where Ed was.  Problem was, Ed didn't know he was there and slid the door open while Gavin's hand was in the track.  After a bit of initial shock on Gavin's part, we knew it was bad when he started screaming and writhing in pain.

We scrambled to get packed up in the car and I sped to the Emergency room with Gavin.  Ed stayed behind with Brian who was pretty un-phased by the whole ordeal.  Poor Ed was in total guilt mode and blaming himself - but honestly, it really was a complete accident.  If he's to blame, then I am too for not watching Gavin like a hawk.  An impossible feat - so there's no blame.  Things happen.

By the time we were at the end of the driveway headed towards the hospital, Gavin was watching his DVD in the car and smiling.  And he never shed a tear after that.  He's one tough kid. 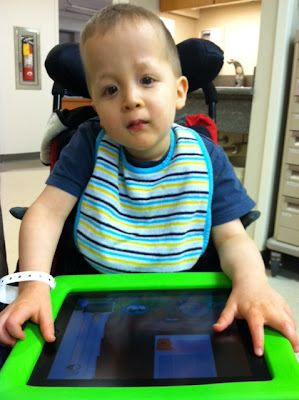 He's wearing a splint for as long as that lasts. 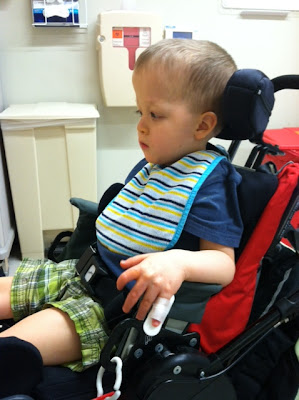 I'll also be calling his regular Orthopaedic doctor at DuPont tomorrow for a follow up. 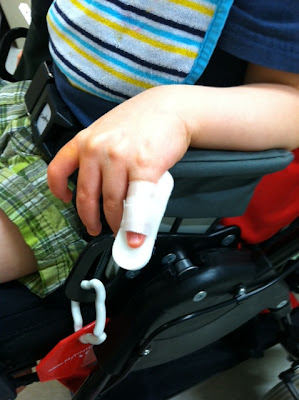 I can't believe it.  I went 42 years without ever breaking anything (well, maybe a few hearts along the way - but enough bragging).

Now let's get to the good stuff.  School!!

Gavin had another great day!  He once again loved circle time and the hello song...and pushed the button to say hi to everyone when it was his turn!  He also had a GIANT accomplishment during music time!  One of his goals in his IEP is to hold a toy or an object in his hand for thirty seconds or more.  During music, each child was given an instrument to play - and Miss Megan gave Gavin a Maraca.  He held it and shook it for FORTY TWO SECONDS!  Just to be sure it wasn't a fluke, they tried again.  Second time - 25 seconds.  And third time was a charm - FIFTY THREE SECONDS!!  That's one check off on his goal sheet!!

Gavin also did some self feeding and did a great job.  And they took him outside with his classmates onto the playground where he walked around in his KidWalk.

It's still so weird to be hearing all this second hand... and to not be showing photos of everything.

While Gavin was at school, I picked Brian up at his school and chatted with his teacher.  Brian was very excited to tell me that he earned enough tokens to pick a prize from the prize box!  The kids get tokens when they make good choices during the day.  Miss Laura, his teacher, said that he is still very well behaved in school and he talks non stop from the time he gets there to the time he leaves!  He's doing so well that his speech therapist, Miss Maggie, recommended that we reduce his speech services from twice a week to just once a week!!  He was getting individual and group.  The individual therapy was to work on articulation needs - which she now feels are age appropriate.  The group was to work on social language skills and that's what will stay the same.  I'm thrilled for Brian and so grateful to Miss Maggie for all her hard work with him!  Actually, I'm so grateful to his teachers, Laura and Morgan, too.  Sending Brian to school was the best decision I was terrified to make.

After lunch, Brian was very excited to pick Gavin up at his school!  Gavin was really happy to see his brother. 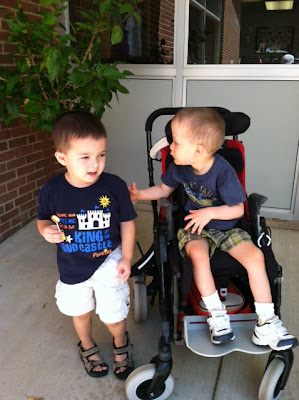 I also had a chance to chat with the Principal at the school - the one who had gotten upset with me on the very first day.  You can read about it here.  She introduced herself and apologized a hundred times to me for her behavior.  It was pouring rain - one of the first days of school - people were in and out and there were lots of new faces.  Even though I told her what I was doing and that I'd be carrying things in and out, she must have forgotten.  She said she saw me carrying equipment and thought I was an aide or a therapist - she didn't realize I was a parent.  She admitted that she had been pretty short with me and was so sorry.  She explained that she was quite the "Mama Lion" in order to protect all these children at the school - and I told her I greatly appreciated that, for sure!!  I told her that I went to Catholic School and have a fear of authority (no comments, please - especially you, Mom) and I was so upset thinking I was in trouble.  She warmly told me that I was welcome to come into the school at any time.  She also said she went in and met Gavin this morning and when I said, "He's pretty adorable, isn't he??" - she agreed.  See?  We already have things in common!  She's really a lovely person.  And now I can breathe.

Speaking of breathing - I didn't do much of that this morning!  All week the school bus has been almost 20 minutes late.  We were told to be ready at 8:10 for an 8:20 pick up.  Today we were a little relaxed about that because of the track record.  As we were in the garage getting Gavin into his wheelchair, I heard the bus.  Oh boy.  I quick got him buckled and went running up the driveway and across the grass yelling "WAIT!" where the bus had pulled up and stopped in front of my neighbors.  Sara grabbed his bags and was running behind me.  Barefoot Brian was running up the driveway crying yelling "WAIT FOR ME!"  It was quite a scene.

The good news is, they waited.  And Bruce told me "Dont' worry, we'll never leave you."  I guess he liked those brownies!!

Posted by Kate from Chasing Rainbows at 8:33 PM