9am:  I think we've turned a corner.  Gavin's last dose of Toradol for pain was at 1:30 this morning.  He could have gotten it when he woke up, but when he gave me that weak smile I told them to hold off.  So far, so good!


Gavin's laying sideways in bed watching Little Einsteins with his arm around his new favorite stuffed Beagle.  A gift from his friend, Addie! 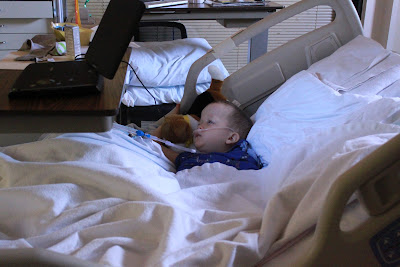 The doctors just did their rounds and were all in agreement that Gavin can leave the intensive care unit TODAY!  At some point we will be moved to another floor.  As soon as the private corner room with a view is ready for everyone's favorite patient, I'm sure.  They are going to start weaning him off the Vapotherm slowly over the next couple days until he's able to keep his oxygen up on his own.  And today we will really encourage him to eat and drink.


Ed is coming out this morning with Brian.  Now that Gavin is in better spirits and less "frightening" looking, I think it would be good for them to see each other. Then I'll take Brian home and spend the day with him before coming back to the hospital for the night.


Please cross everything that everything goes according to plan!!  Today has the potential to be a great day. 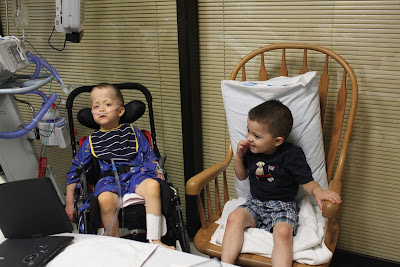 Brian was VERY happy to see Gavin and had lots of questions.  What's that for?  What's this thing?  What's in his nose?  He didn't seem scared at all. 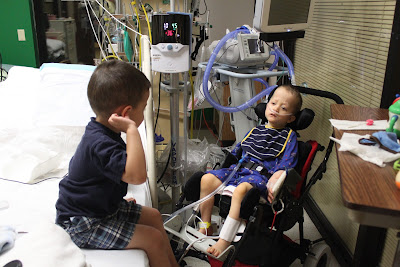 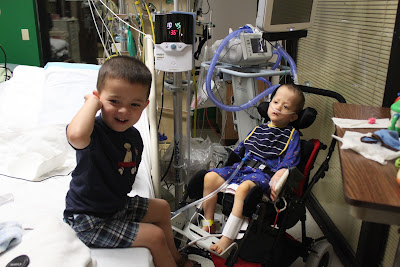 Gavin didn't have any smiles after this morning, but I really think the presence of Brian lifted his spirits.  So much so that he started DRINKING!!!  Just little sips, but it's a start! 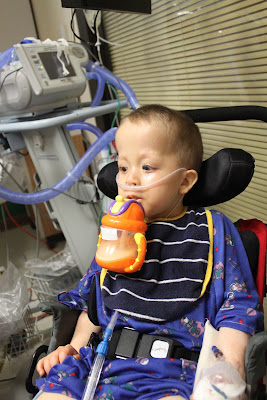 Ed lifted Brian up to look out Gavin's window.  Something even I hadn't done until today.  The hospital is under construction for a huge remodel so it was a big treat for Brian to see all the trucks and construction workers! 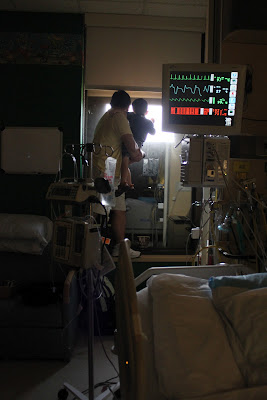 Brian and I are on our way home while Ed and Gavin move to his new room.  We're going to the same floor where Gavin spent months as a baby - 3E.  I know we'll see lots of familiar faces!!  I'll write more when I get back tonight after I get Gavin's progress report from Ed.

***
I enjoyed every millisecond of my time with Brian.  From the elevator button pushing on the way down...to the stop in the gift shop on the way out for the biggest, bluest lollipop Brian's ever seen...to the chat on the drive home...to our afternoon of coloring, cars, stickers and giggling.

I asked Brian on the way home what he would like to do with Gavin when he comes home.  He said "Ummm....Gavin to laugh."  I asked if he wanted to make Gavin laugh and he replied, "Maybe giggle."

My Mom met me at my house with lots and lots of comfort food to bring back to the hospital and leave at the house for Ed.  (Homemade potato soup - divine!)  Near the end of my time at home, Brian had a bit of a meltdown.  He buried himself in my neck and just sobbed and sobbed - near hyperventilation.  I think, even though he was happy and we had fun all afternoon, it was his way of "letting it all out" and I didn't try to stop him.  We went up to my bedroom and sat in the rocker for a while.  I asked him if it's been hard for him to miss Mommy and Gavin.  He said yes.  I told him it's okay to be sad.  That I was sad, too, and missed being home with him.  I asked him if he wanted to plan a party for when Gavin and I got home.  We planned to make cupcakes and get balloons and he said that it had to be Mommy and Gavin and Daddy and Miss Sara and Brian.
Done.

When I got back to the hospital, Ed reported that Gavin had a bit of a tough time with pain.  That was the only bad news, though!  He ate yogurt, drank Pediasure, Kefir and was smiling away.  I couldn't believe it!!

But then - Gavin proved it to me. 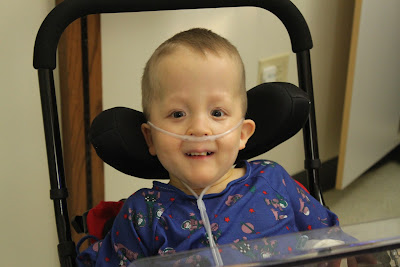 I fixed him a big dinner and was shocked at how much he ate.  This is all good news. 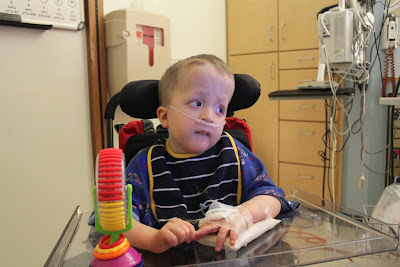 The only hiccups came from his IV and his Oxygenation.  When the respiratory therapist attempted to turn down the setting on his Vapotherm, he "de-satted", requiring her to turn it back up.  And then later, when the nurse was getting ready to give him his IV meds, she wasn't sure she was comfortable with the IV site.  She called in the nurse manager and the two of them had to break down the IV (which pretty much means remove the thousands of layers of tape so they can see the actual needle.  which also means torture Gavin.) to get a better look at it.  After some manipulation (which meant crying, yelling, sweating and near gagging from Gavin) and flushing they thought it must have been a blood clot and kept the IV.  Thank God.

Gavin could get his medications orally, but that can be a crap shoot.  Getting his Lasix and his antibiotic through IV is a sure thing.  As long as the IV works - I'd prefer he get his meds that way.  But if they have to pull it - I do NOT want him to get another one.

There's really no predicting when Gavin will go home.  Once they wean him down on the Vapotherm, they'll want to switch him to regular Oxygen.  And then he'll have to keep his oxygen sats up before they discharge him.  It's hard to predict.

He's had a restless night tonight.  Hopefully he'll wake up tomorrow with that smile again. 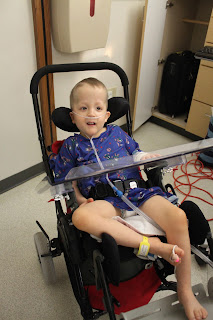 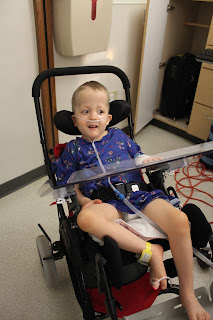 Posted by Kate from Chasing Rainbows at 8:09 AM