Let's start day four's post with a happy memory, shall we?
The night before Gavin's surgery, I took the boys swimming in our "indoor pool" as a very special treat.  Gavin was SO happy - which was the exact emotion I was going for.  What I wouldn't give to see that happy face again. 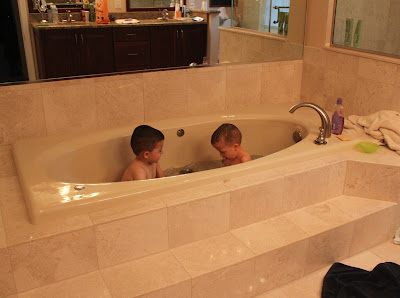 8:00am:  Last night, around 11pm,  I wrote on Facebook that Gavin was sleeping soundly and I thought that both of us were going to sleep through the night for the first time.

Well, I was partially correct.

From 2-3:30am, both of us were awake.  I don't know how to describe it...but it seemed like Gavin had "restless body syndrome" - kind of like restless legs, but everywhere.  The nurse and I didn't know what to make of it...and we changed his position to see if that would help.  I tried massaging his legs and arms...laying with him...putting on his Little Einstein movie to see if he would focus on that...I pulled out all my tricks.  To be clear - these were not jerky "seizure like" movements if you were concerned.  They were intermittent and it seemed more to us like he was agitated and uncomfortable.  The resident gave him a very small dose (very small) of Ativan to relax him...and he was able to go back to sleep.  And so did I.

I woke at six and checked on Gavin and he was hot.  Unfortunately, he has another fever - 101.5 - which may prompt a repeat X-Ray today.

The ENT group came around bright and early to check on him.  From their perspective, he's still looking great.  The biggest concern is the respiratory issues and the Pneumonia.

I'll update again once the doctors make their rounds this morning and I find out the game plan for the day.

Please continue to keep Gavin in your thoughts and prayers.
He needs as much positive energy as he can get.

***
1:50pm:  A lot has happened since this morning that kept me from a sooner update.  Gavin did indeed get another chest
X-Ray and it came back showing no improvement.  It wasn't worse...but it definitely wasn't better.  Despite that finding, the doctors decided that clinically he might be ready for a trial off the BiPAP.  They wanted him to go on Vapotherm via a nasal canula for an hour.  Vapotherm is essentially a high flow, high concentration of Oxygen that is vaporized with warm air.  They suggested we get him back in his chair on the Vapotherm and let him attempt to take small sips of his Pediasure.

Before we made the move out of bed, Gavin had a very special visitor!!  Ed stayed home this morning so Miss Sara could come to the hospital to see us.  Gavin was SO happy to see her... 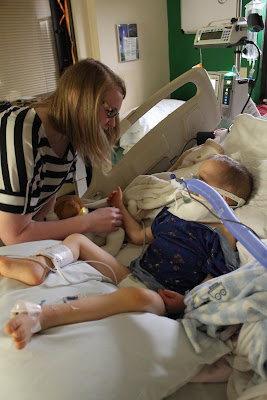 ...and I know the feeling was mutual.

Soon, the nurse and I got him all ready - disconnected temporarily from some of his wires and IV - and I picked him up and put him in his chair.  He and Miss Sara watched movies and talked for a little while before she had to get back  to tag team with Ed.

Shortly after she left, the respiratory therapist came in to hook Gavin up to the Vapotherm.  I love that it gave me a chance to see his face and wipe it up with a warm cloth to make him feel a little better.  I also swabbed his mouth with one of those sponge on a stick thingamajigs.  He LOVED that. 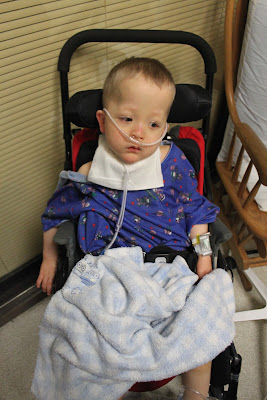 I then brought out his sippy cup with the Pediasure and his very shaky hand slowly reached up to touch it.  He was thirsty, it seemed.  As soon as the straw touched his lips he started to drink.  And drink.  The doctor told me to only give him small sips.  That was a joke - Gavin held that straw between his teeth and kept drinking.  I nearly called the fire department to ask them to bring the jaws of life!  He probably ended up drinking 3oz and I took it away.  He was starting to gag and I didn't want to overload him too soon.

Because Gavin's on Lasix, his urine output is high for about an hour after he gets it in his IV.  I ended up having to take him out of his chair to change him with the nurse's help. Before I put him back in his chair, I requested some holding time.  We sat on the bed and he was so weak - he had a hard time holding his head up. 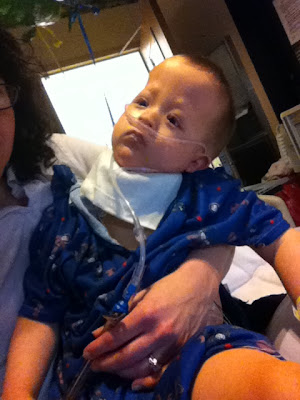 But then I gently guided his head onto my chest and there we stayed for a while.  I was so happy to have him in my arms. 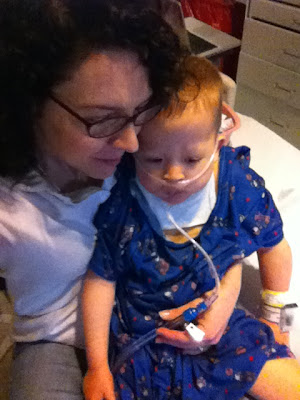 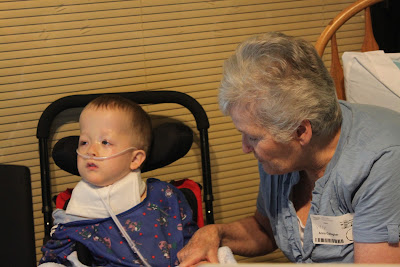 Gavin ended up staying on the Vapotherm for almost TWO hours.  By the last half hour, you could tell he was exhausted.  He was also breathing rapidly so I called the respiratory therapist to help me hook him back up to the BiPAP.  I tilted him back in his chair and he's now sleeping soundly. 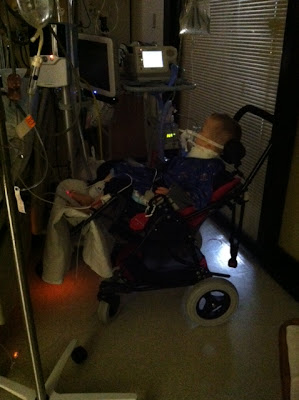 Slow and steady wins the race.  But I do believe we're in for a pretty long race.


***
9:00pm:  Not long after I wrote the last update, Ed arrived.  Gavin woke from a sound sleep to acknowledge his presence with his eyes and then passed out again.  I did something very rare while Ed was here...I took a short nap.


I ran out to pick up something for dinner and when I got back to the room, Gavin was back on the Vapotherm.  They decided to let him stay on it until he declined - or when he was ready to go to bed.  Whichever came first.  He slept up until Ed had to leave.  Which, coincidentally, was the time that we discovered he needed yet another new IV.  The IV in his ankle had infiltrated.


Gavin needing an IV is always awful news.  He has the tiniest, most difficult veins.  Many of them were already blown from previous sticks.  When the nurse told me he needed a new one tonight, I told her to not take offense - but she wasn't doing it.  And that she'd thank me for that.  Gavin is such a difficult stick - I always ask for the IV team immediately.


After two tries...screams and tears...near vomiting and sweating...she finally got the IV in his arm.  It took a long time of looking with special UV lights and tourniquets and other opinions - Gavin was a mess during the wait.  He was a wreck during the sticks.  And he was traumatized and hysterical for quite a while after everyone left and it was just us.  It broke my heart as it always does.


He's back on the BiPAP and sleeping in bed.  I think both of us are a bit tense and anxious tonight.  I felt lucky when Jill from the "Healing Touch" department came by to ask if she could work on Gavin.  She just finished and said she tried to calm his energy.  He has been twitching and kicking and thrashing - just like last night.


As an added bonus, she said she'd come back and do Healing Touch on me.  The timing is perfect.  I'm feeling a tad bit frustrated and helpless tonight and I don't want those feelings to come across in front of Gavin.  After all, he's the one that is truly suffering here.  I'm just the witness.


This will be my last update tonight.  Please pray that tomorrow is a better day for our little superhero.  He really needs a break.

Posted by Kate from Chasing Rainbows at 8:24 AM