I feel like the last week has been a whirlwind.  Getting ready for the trip, the roadtrip to my Dad's lifetime achievement award ceremony, going on the trip to Puerto Rico and then the recovery.  I have so much "catch up" to do around here to get my journal back to "normal!"  So tonight will be just that...all business with a sprinkle of fun and, big shock, a plethora of photos.  Oh, and be sure to read all the way to the end as I have something very special to share about THIS beautiful niece of mine!! 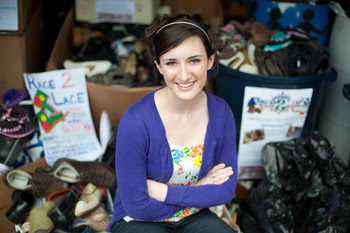 Ed and I were pretty shocked to come home to weather that was more unbearable here than it was in the Caribbean Islands!  We celebrated Memorial Day (or "Soldier's Day" as Brian called it!) out in our own backyard.  We have a pretty swanky pool that is the envy of all of our neighbors, as you can see... 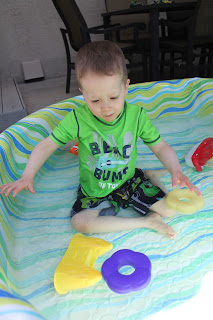 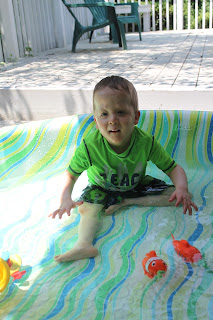 Including a pretty attractive lifeguard... 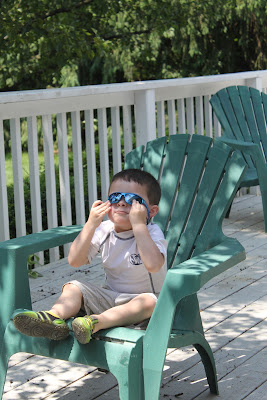 We decided that day to set our Ladybugs free.  We raised them from little larvae and it was so fun to watch them grow.  Here's Brian with some of the play by play action:

Goodbye little ladybugs!  Hope to see you around the yard! 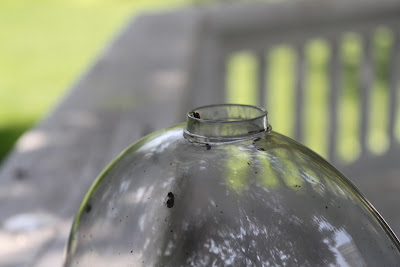 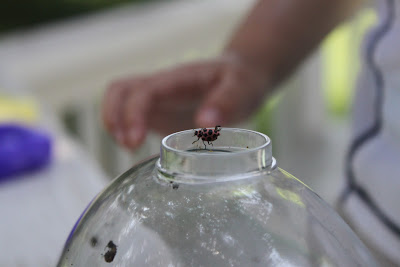 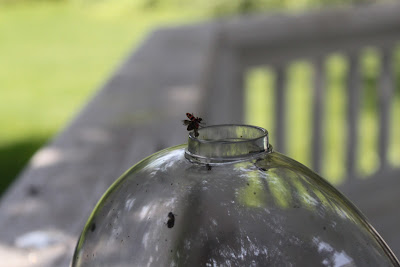 Then there was lots of running.  Chasing butterflies.  Climbing on the playset.  Gavin and Daddy were smart and lounged at the pool while I was sweating to the oldies...me being the oldie. 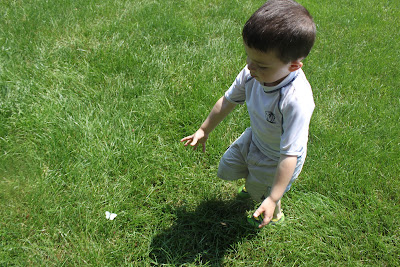 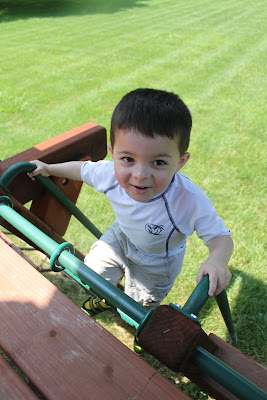 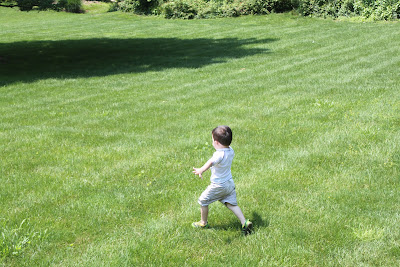 Brian - following in his big brother's footsteps - is finally getting courageous enough to put his face in the water!  Gavin does it in the tub all the time and will actually blow bubbles.  Yes, Gavin!  Brian's starting to get the hang of it and laughing all the way... 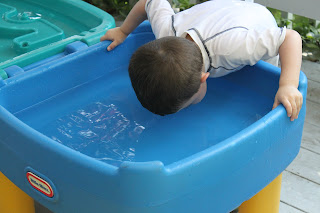 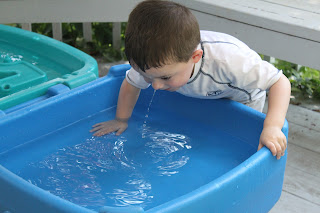 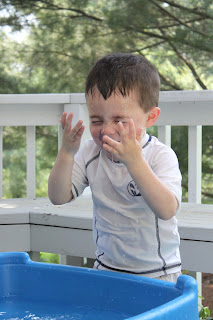 It was a nice, relaxing few days with our boys.  Paradise was wonderful...but there's no place like home. 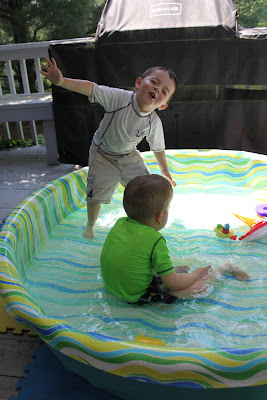 Lately I've been embroiled in another edition of "Mystery Diagnosis" with Gavin.  Since his last two (and only two!) ear infections (ever!) he has been having some issues that are concerning to me.  He's been having coughing episodes at night that lead to vomiting.  When I say we protect his bed - we're talking two to three mattress protectors...two fitted or top sheets...and then we lay a huge bath sheet on top of it all.  One night we had to change his bed three times - and give him two full baths.  It's been rough - shades of his infancy all over again!  After kneeling by his bed one evening and realizing that his apnea (which is not new) was at least 50% worse (if not more),  my mind has been racing with possibilities and I landed on three that I brought up at his last pediatrician visit.

The doctor was able to tell in the office that his tonsils were inflamed.  And today I was able to get an X-Ray which confirmed what I feared - enlarged Adenoids that look as if they could be restricting his airway.  The reflux is a hunch - based on two straight years of experience in the trenches.  I'll be calling his ENT at DuPont in the morning and begging him to see Gavin as soon as possible.  We could be looking at an adenoidectomy which only worries us because of the obvious need for sedation.  Gavin and anesthesia are not the best of friends.  But I am very worried about his apnea so something needs to happen - it's pretty extreme.  I constantly have the monitors on high so we can hear if he throws up any time during the night.  But listening to him snore - and then not snore - and then gasp - and then cough - and then snore again - it's painful.

Gavin's therapy has been going well.  He had Occupational Therapy with Miss Stephanie today and she used some of the time to work on his re-evaluation.  It's hard to believe that time has come - that means that his current therapists have been with us for almost TWO years!!  (Which also means that Gavin is nearing five years old.  Just insane.) 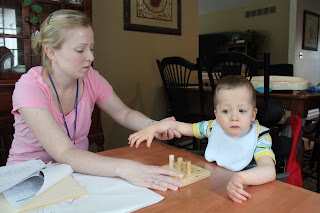 This was a pretty great moment from today's therapy.  He not only held the marker himself - he held it well.  AND he touched it to the paper!! 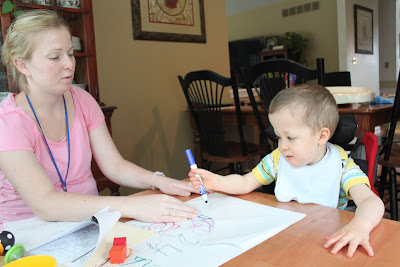 Oh and by the way - Ed and I are shocked that Gavin's eyes have suddenly changed color.  Is that even possible at his age??  His once blue eyes are now turning a dark hazely brown!!  Seriously - is that even normal???  I will definitely be giving his geneticist this information. 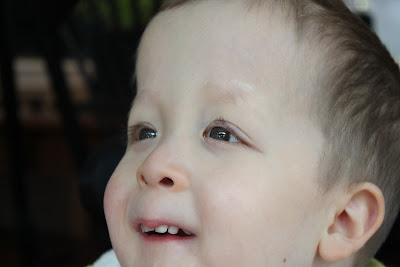 If you didn't notice by the videos, Brian has had a speech and language explosion!  He talks from morning to night and we love it.  Some of the things he comes out with are hysterical - and some are profound.  We feel so lucky to watch him express knowledge that he's obviously been storing away in his brain!  He's a smart little boy!

As for me - I'm hurting at the moment.  Last night I had my oral surgery and it was awful.  I am quite a baby at the dentist and have always had very sensitive gums and teeth.  There's never enough Novacaine - they always have to keep re-injecting me, which sucks.  I came home last night with sutures from where they cut into my gums - a huge "chipmunk cheek" - and a mouth that hurt to open.  Today was rough.  But it's over...and just in time.  I have big plans to get pregnant next week.

I will know more details over the next two days, but it looks like our egg donor is getting close to her egg retrieval!!  I have been on Lupron injections to keep my body from ovulating...and a high dose of Estrogen which keeps me crying at commercials and moved beyond words when the mailman walks our mail to the door.  (God I love that guy!)  After the donor has her eggs retrieved and they fertilize the one we want - we wait for three to four days while it 'grows' in the lab.  When it's ready, we'll go in for the transfer!  Once the embryo is transferred inside of me, I'll be on two full days of bedrest which will be torture.  But if I don't complete poor Brian's third birthday video (remember his birthday last DECEMBER???) while I'm laying in bed - I will gladly turn over my Mother of the Year award.  It should have gone to the Octomom anyway.

Finally...I need to be a proud Aunt for a moment.  My niece, Hannah, recently took a trip to Haiti with my sister (her Mom) Meg.  Hannah is 15 years old...going on 30.  She's not like any teenager I know...and it would be a dream for me to have a daughter like her one day.  After coming home from this mission trip, Hannah felt moved to do something more to help the Haitian people.  She realized that shoes were a hot commodity and decided to organize a 5K race and shoe drive.  We're talking formal letters and visits to local businesses...speaking at the chamber of commerce...collecting shoes...fundraising...getting police detail for the race...and more.  Did I mention?  Yep - 15.  This weekend is the big race in their hometown of Merrimack, New Hampshire.  I feel lucky that I was able to send up five or six huge garbage bags of shoes that were kindly donated by my friends at the Just Between Friends consignment sale in April.  If you live in the Merrimack area, please do stop by the race and meet my beautiful niece! 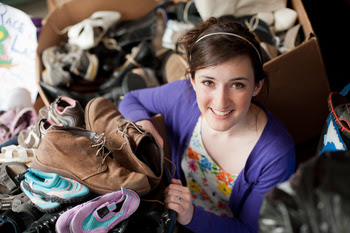 I'm so impressed by her.  Actually, my sister Meg is my parenting idol.  Each one of her four children is more amazing than the next.

Take a minute to check out the full story of Hannah's inspiration to go to Haiti, to organize the race and to buck the stereotype of the "typical teenager" by "Doing Hard Things."

Congratulations, Hannah!  We love you!!
Posted by Kate from Chasing Rainbows at 11:02 PM